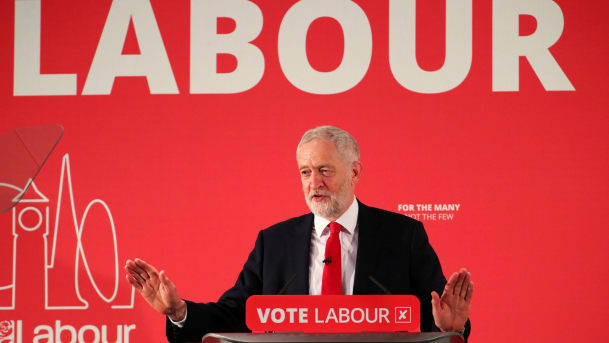 We find it strange that Jeremy Corbyn, with only two weeks to go before an election and after 3 years of sustained anti-Bharat, anti-Hindu rhetoric, today seems to have realised that the people of Bharat and especially Bharat’s Hindus in their 10s of millions, suffered for over 250 years at the hands of British Colonialists.

The following questions need urgent answers if Labour is to recover support from the British Dharmic community.

Where was Mr Corbyns’ memory of colonial human rights abuses, when he arrogantly snubbed PM Modi’s Parliamentary address, the state address of the Prime Minister of the world’s largest democracy? Where was his love for the former colony, India, when the Labour Party campaigned for and effectively banned the democratically elected CM Modi from entering the UK, for 10 years?

Where was his love for British Hindus when he personally refused to consult with the British Hindu Community whilst using a 3 line whip to bull-doze the hate-infused, HinduPhobic “Caste Discrimination” legislation through Parliament? We note that implementing this legislation is still Labour Policy.

Where was his respect for Hindus and Sikhs when he refused to consult with our communities prior to prematurely adopting the Islamophobia definition? Hindus have an 800 year history of facing Islamist terrorism in Bharat, Sikhs a 300 year history of facing Islamism and yet by adopting the Islamophobia definition without full consultation, our right to speak of and celebrate our history of survival, is effectively denied us. We note that implementing this Definition is still Labour Policy.

Where was Labour’s consultation with the British Hindu community whilst formulating the divisive “Kashmir Intervention Policy”? Why would Jeremy Corbyn’s Party elevate the demands of the British Pakistani Muslim Community over the rights of the British Hindu and British Sikh communities? Is this Labours’ view of Equality? We note that implementing this policy is still a Conference supported, democratically passed Labour Resolution, available to be implemented post election.

As for his promise to teach “Colonialism” in schools, presumably the syllabus will include significant details such as Labour defaulting on the 20th August 1947, on £1.51 billion (the equivalent of $83.93 billion today) of War Debt owed to Bharat, which is still morally outstanding?

Perhaps there will be mention of the 1968 Labour Government reneging on its legal obligations under the European Convention on Human Rights by refusing entry to British passport holding Gujarati Indians, fleeing persecution from Kenya and Uganda. No doubt residents of Leicester will remember the 1972 Conservative Government under Edward Heath sending flights to Uganda when Idi Amin threatened to throw Indians into Lake Victoria. It was the Labour City Council who thought it wise to place adverts in Ugandan newspapers discouraging Indians from coming to Leicester.

Perhaps it will include the detail that whilst fleeing Bharat in 1947, Labour’s last act was to create Pakistan (a Pakistan whose Hindu population has been decimated from 24% to 2% since 1947) and Bangladesh (where 49 million Hindus have disappeared since 1947) and in doing so dismembered Bharat, inflicting the horrors of Partition on an unprepared humanity?

Perhaps it will teach that it was Labour who created the Kashmir problem, whilst simultaneously slashing the Punjab into two on Religious lines, playing the politics of religion in favour of the Islamists, whilst creating an Islamic state which has been “in turmoil” ever since.

Perhaps Jeremy Corbyn’s Colonialism syllabus will include the detail that it was Labour which created the Indian Congress Party, its socialist partner, which turned a blind eye to the genocide and SEVEN exoduses, and ethnic religious cleansing of the 5000-year-old indigenous Hindu community from Kashmir, (the community known as the Kashmiri Pandits) by Pakistani Islamists.

And today, after all of these atrocities against Hindus and Sikhs in Bharat, a Labour “would-be PM” decides once more to intervene in the issue of the 1984 Genocide, inflicted upon the Sikh community by Labour’s ideological and colonial offspring, the socialist Congress Party whose leaders are presently out on bail on criminal charges.

Jeremy Corbyn has demonstrated a frightening lack of basic knowledge with regard to the history of the Bharatiya subcontinent and sustained a complete lack of respect for the British Dharmic community.  His engagement with our community and its leaders has been dismissive, bordering on colonialist, as evidenced in the electoral candidate election process, and his execution of international policy is best described as “dangerous meddling” and devoid of any indications of reflective, informed, sensitive statesmanship.

It is with great regret that we observe that the Labour party under Jeremy Corbyn and John MacDonnell, has chosen the politics of partisan patronage, that it has discarded the “British Citizen” as its primary beneficiary, choosing instead identity and vote bank politics on the basis of Religion and Ethnic divisions.

British Hindus and members of other Dharmic traditions are peacefully and fully integrated into British society, not needing, nor demanding special rights or support. Like the British Jewish community, we have worked to establish ourselves, accepting and contributing to the values that lead to a tranquil and prosperous society, for all British citizens. We are full stakeholders in the past, present and future success of multicultural Britain with a 3 generation investment in the welfare, prosperity, security and stability of our adopted home. We see this investment today under threat.

We have never witnessed such an upsurge of fear, worry and concern, expressed nationally from all quarters of the British Hindu Community, throughout the country. Traditionally the British Hindu Community has remained disengaged from active political engagement, with an average 30% voting record; generally elections have been viewed as minor, inconvenient distractions to the daily work of community building, economic activity and education but the last 3 years have seen a dramatic change in response to the threat posed by what is now perceived as an extremist, anti-Hindu anti-Bharat party.

As well as alienating the British Hindu community, the recent attacks on Hindu festivals and premises, the un-evidenced, spurious allegations of BJP interference in local politics etc, have witnessed the unprecedented distancing of a Bharatiya Government from a British Political party. It is tragic but it is inconceivable that a Jeremy Corbyn led trade delegation to Bharat would be received favourably by Bharatiya business houses and this must be a cause for great concern.

In conclusion, putting economic and political concerns aside, the lack of importance given to racist, hate-inspired discrimination, combined with a refusal to consult, address or engage with Dharmic minority communities on these most corrosive and destructive of undercurrents, whilst in opposition, is cause for grave concern as to the deterioration in security and safety which will follow if continuing in Government.

We recommend that ALL members of our British Dharmic communities, ensure that they fully research the policies and personalities of all political parties, and above all, actively participate in British democracy by VOTING, it has never been more critical that we engage.

(This article first appeared at Britishboardofdharmicscholars.org on 26 Nov, 2019)