The BJP’s saffronisation of GHMC polls 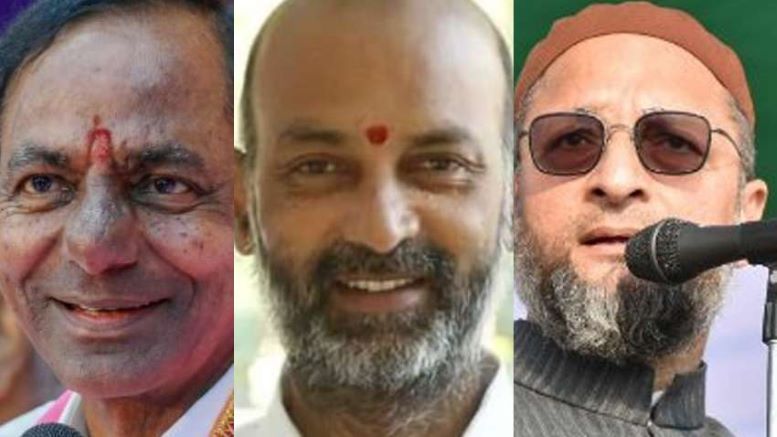 The BJP (Bharatiya Janta Party) improved on its 2016 tally and went from 4 to 48 in the recently concluded GHMC (Greater Hyderabad Municipal Corporation) elections leaving the ruling TRS (Telangana Rashtriya Samiti) reeling with a mere 55 seats. The phenomenal rise of BJP and the saffronisation of Hyderabad (rather Bhagyanagar) certainly have far-reaching implications as far as the political scenario of the state is concerned.

The TRS only has the high-handedness of its chief KCR (K Chandrashekar Rao) to blame for its electoral losses including the latest GHMC  drubbing. KCR had been ignoring all tell-tale signs ever since his landslide victory in the 2018 Assembly elections. He chose to ignore the sentiments of the cadres and continued to promote nepotism which ultimately led to the party’s election losses.

After losing the MLC elections in March 2019 and receiving a severe setback in the 2019 Loksabha (LS) elections where besides being able to garner only 9 seats, KCR’s daughter losing her Nizamabad seat to BJP, and the BJP successfully clinching the Karimnagar constituency which was under the charge of KCR’s son turned out to be major embarrassments.

There was a brief respite from this losing streak when TRS successfully grabbed the Huzurnagar seat in the by-polls and was able to secure wins in 9 out of the 10 corporations and 110/120 municipalities. However, the glee was short-lived as BJP once again turned the tables on TRS by winning the Dubakka by-poll. Although the victory margin was a mere 1200 votes, the victory at the cost of TRS at KCR’s family bastion established the fact that the BJP was making a mark albeit as formidable opposition and consolidating its position in the state.

The ultimate drubbing and snubbing by the voters came during the recently concluded GHMC polls where the TRS tally slid from 99 to a mere 55 seats. In addition to the blatant nepotism, KCR’s handling of the Chinese Virus pandemic was mainly responsible for the GHMC loss.

However, the rise of BJP is not just due to the absentee governance of KCR but also due to the party’s ability to encash the anti-TRS sentiments. This is probably one of those rare local body elections where the BJP pressed in its top leaders into campaign making it a high-pitched election campaign. Along with HM Amit Shah, UP CM Yogi Adityanath, and BJYM President Tejaswi Surya, BJP President JP Nadda and Union Minister Smriti Irani also campaigned for the party among others.

The BJP manifesto has made some deliverable promises add to that the efforts put in by BJP Telangana Bandi Sanjay and we have a recipe for election victory. Sanjay not only consolidated BJP’s position in the corporation but also delivered a knockout punch to TRS. Sanjay, though a relatively lesser-known face, was able to connect with the youth and bring forth the Hindutva ideology to counter the propaganda by AIMIM.

Since he has been a grassroot worker and risen from the ranks, he was also able to establish a connection with the workers as well as with the voters. His connection with the people led him to secure a victory in the Karimnagar Loksabha seat trumping the TRS and Congress candidate in 2019.

BJP was the only party that raised the issue of illegal Bangladeshi, Pakistani, and Rohingya infiltrators in the old city. Apart from that what worked well for the BJP was the coordinated effort of Bandi Sanjay Kumar, Union Minister G Kishan Reddy, and Party General Secretary Bhupendra Yadav.

BJP showed enough aggressiveness despite being pressed for time due to the preponement of the elections from February next year to this month as well as faced with hostile state machinery. The four LS seats along with the Dubakka by-election victory enthused both the leaders and the cadres and this win is historic in all sense of the term.

The important point to note here is that both the TDP and Congress have conceded the opposition space to the BJP and this is bound to help the party in the next assembly elections due in 2023. Significantly this win has shown that the BJP is capable of consolidating the Hindu votes that would play a major role considering that the state has a 12% Muslim vote which the AIMIM would consolidate.

The BJP was merely laying the foundation stone to consolidate its vote bank for the 2023 assembly elections. 49 seats in this election are sure to buoy the party and encourage them to aim for more in both the assembly as well as Lok Sabha elections in the near future.