As another leader is murdered in West Bengal, what explains BJP’s pusillanimity and masochism? BJP councillor Manish Shukla (28) was murdered in Titagarh, North 24 Parganas district of West Bengal on Sunday night as he was entering a party office near Titagarh police station. The assailants came on a motorcycle and fired at him from a close range and six bullets pierced his body. He was declared dead at a nearby hospital.

Shukla was an advocate and a close aide of BJP MP Arjun Singh who had switched over to BJP from Trinamool before the 2019 Lok Sabha elections. Last year, Arjun Singh had suffered severe injuries during a police baton charge in Kankinara, North 24 Parganas to disperse a protest. In May, the MP had written a letter to WB Governor Jagdeep Dhankhar alleging that Barrackpore Joint Commissioner of Police had attempted to assassinate him on the order of Mamata Banerjee.

Titagarh is close to WB’s capital Kolkata and also a part of the area covered by Kolkata Metropolitan Development Authority. In 2017, there were reports of country-made bombs and stones being thrown from a mosque in Titagarh during a Ram Navami procession.

BJP supporters blocked BT Road at Titagarh in protest against the attack on Manish Shukla alleging TMC involvement. However, Trinamool MLA Partha Bhowmick disowned the attack and blamed it on ‘BJP infighting’.

As is their wont, WB Police warned citizens against ‘jumping to conclusions’ stating that ‘a person was shot dead… looking into all possible reasons including personal enmity because the victim was accused in some cases of murder and attempt of murder.’ The flippant attitude towards the murder of a councillor should not come as a surprise in a state where even the murder of an MLA barely creates a flutter in the law & order department.

Governor Dhankhar tweeted hours after the murder on Sunday night that he wants to discuss law and order situation of Bengal with DGP and home secretary, but got no response.

Targeted political killings in spite of alert by Constitutional Head.

Only silence that speaks volumes

Any political observer worth his salt can tell you that West Bengal has been converted into a killing field for BJP workers, especially since the 2014 Lok Sabha elections where BJP recorded a stunning 11% increase in vote share to amass 17% of the total vote, relegating Congress to 4th position in the state.

But the target is not BJP – the target is Hindu political assertion, for which BJP remains the only viable vehicle in West Bengal, as in most of the rest of the country. Essentially, Hindus are being murdered for daring to challenge the secularist status-quo established by Congress, its regional clones and Communists.

Article 355 of the Constitution states that it shall be the duty of the Union to protect every State against external aggression and internal disturbance and to ensure that the government of every State is carried on in accordance with the provisions of this Constitution.

Whereas Article 356 vests in the Centre a power to dismiss state governments on the grounds of breakdown of the constitutional machinery.

As this Sept, 2008 article ‘Article 355 Centre’s latest whip to make states fall in line?’ shows, UPA govt. never hesitated to use Article 355 against states witnessing law & order issues, albeit with their customary double standards of targeting Opposition ruled states. Mind you, UPA even issued rebuke under Article 355 to Karnataka after ‘church attacks’ began to be reported immediately after the first BJP state government in the south under BS Yediyurappa was sworn in (any similarities with the 2015 Delhi ‘church attacks’ immediately after the first full majority BJP government was sworn in at the centre in 2014 are purely co-incidental, of course).

For that matter, months after winning the 2009 Lok Sabha elections, the UPA-2 government had sent a team under Article 355 to assess law & order situation in CPM-ruled West Bengal, a move which the Communists retorted was engineered by Home Minister Chidambaram at the request of then Union Rail Minister Mamata Banerjee with her eye on the 2011 WB state elections.

As for imposition of President’s rule in states using Article 356, it had been imposed 124 times as of Jan 2016, with the graphic below showing the break-up of PMs who exercised this option – 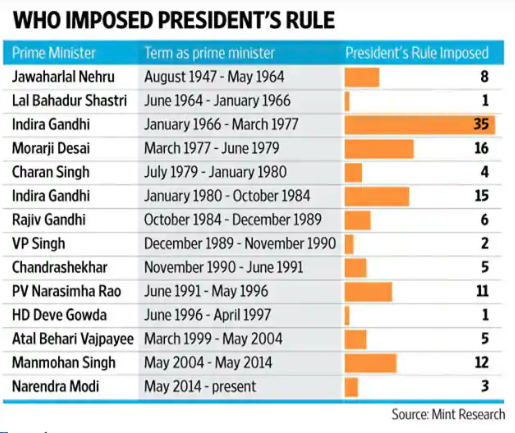 Since the above graph was created, President’s rule has been imposed 3 more times – in Uttarakhand, J&K and Maharashtra, either due to fractured verdict in elections or government’s losing majority in state assembly. The worst abuse of Article 356 was carried out by Indira Gandhi, as can bee seen in the above chart.

But if ever there was a case fit for imposition of President’s Rule due to deteriorating law & order in a state, it is West Bengal. So why is BJP so diffident, even in issuing a rebuke to Mamata Banerjee under Article 355 and sending a central team to assess the law & order situation? Why are the Home Minister and Prime Minister not verbalising their disquiet at the dismissive  way the WB administration is treating the Union’s representative to the state, Governor Dhankhar?

BJP national spokespersons are often seen reacting just like the citizens who call out double standards of Hinduphobic mainstream media and Lutyens’ intelligentsia who maintain a stoic silence on the situation in states like West Bengal & Kerala. But isn’t the whole idea of bringing a party to power at the centre with a thumping majority to ensure that it takes required action rather than simply participate in outrage?

The buck stops with PM Modi on this. If he wants to avoid using his bully pulpit for ‘politicisation’ of law & order issues, he should at least empower the Home Minister to talk tough to Mamata Banerjee. That is the least the beleaguered BJP party workers and Hindus of West Bengal deserve.