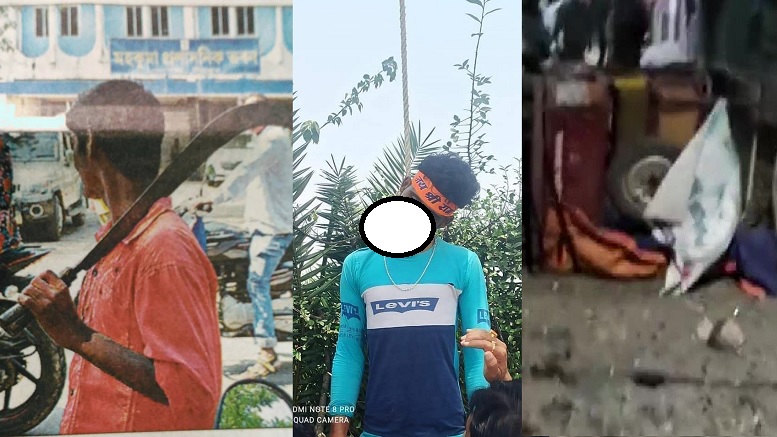 The intensity of violence in West Bengal is at an all-time high as the 8-phase assembly election nears conclusion, and Mamata Banerjee-led ruling TMC’s desperation grows.

BJP worker Kiranjan Ghosh’s dead body was found hanging from a tree in a deserted place near his house on 23 April, in Alinagar village, Jamuria in the poll-bound Bardhaman district. He was wearing a ‘Jai Sri Ram’ headband. Ghosh’s family members report that he had not returned home since Thursday night; his body was recovered on Friday evening. A large team of police and security forces have been deployed in the area that goes into polling on Monday in the 7th phase of elections.

Kiranjan Ghosh found hanging from a tree in Jamuriya Constituency of Bardhaman, West Bengal
Cold blooded murders of @BJP4Bengal workers continue.
Few more days and these murderers will be dug out and put to gallows.
Let's unite and fight together for our workers.
Om Shanti pic.twitter.com/avmbcwjUWe

BJP workers found hanging like this has become a common occurrence during the last few years as the party has grown to TMC’s fury. Ghosh’s murder brought disturbing memories of the way Dalit youth Trilochan Mahato (18) was found hanging in Purulia after the 2018 Panchayat elections with a note scribbled on his white T-shirt that said “This is what you deserve for working for BJP”.  Two days later, another BJP activist Dulal Kumar (30) was found hanging from a high-tension electrical transmission tower in the same area.

Another Dalit BJP worker was found murdered in brutal fashion in Nadia district early on the morning of 18 April, less than 10 hours after polls had concluded in the area. Dilip Kirtaniya, 38, a popular booth-level BJP worker and a carpenter, was found dead in the courtyard of his home with severe injuries to his abdominal region. Dalip belonged to the Matua SC (Scheduled Caste) community.

Assailants had thrashed Kirtaniya when he had gone out early morning to attend to nature’s call. He was rushed to hospital, but declared brought-dead. A doctor at the hospital said: “The victim’s testicles were thrashed by the assailants and were bleeding profusely.”

The victim’s elder brother, Biplab Kirtaniya, said: “He was murdered by miscreants of Trinamul. They had threatened my brother a number of times during the voting on Saturday. He had earned their wrath for escorting voters to the polling station, since many of them, who are BJP supporters, were afraid to go to the booth in the face of threats from Trinamul miscreants.”

In his police complaint, Biplab has named nine Trinamul workers.

Family sources claimed that miscreants had threatened Dilip many times in the past one week asking him to leave the BJP. On the day of the Lok Sabha polls in 2019, miscreants with Trinamul links had beaten up him for daring to cast his vote in spite of their threats.

Trilochan, Dulal, and now Kiranjan and Dilip – all were ignored by left-liberal media and intelligentsia. No media house demanded answers from Mamata Banerjee for their deaths, and no activist NGO or human rights group organised ‘Not in my name’ or ‘Lynchistan’ protests for them.

Meanwhile, the cycle of violence against BJP candidates and workers continued.

Soon after Mayor Firhad Hakim’s video inciting violence on BJP supporters went viral on social media, assailants targeted Ballygunge assembly BJP candidate, Lokenath Chatterjee repeatedly and on different locations. On April 22nd, the 6th phase day of polling, Chatterjee was first attacked at Darga Road where goons hurled stones at him from an under-construction building. The second ambush attack came on the same day at Jannagar Road where brickbats were flung at his car, hitting his driver and injuring other workers accompanying him.

Shibaji Singha Roy, contesting on a BJP ticket from Kashipur Belgachhia, is another BJP candidate to have sustained serious injuries after being attacked brutally, allegedly by TMC supporters, on 23rd April. He was rushed to a nearby Apollo hospital. The incident occurred on Friday evening when Singha Roy and BJP MP Arjun Singh reached Belgachia to address a public rally. A gang of unidentified miscreants launched attacks on the BJP party workers present at the venue leading to the mayhem. Locals and BJP members accuse the TMC of plotting the attack, though the latter has denied all allegations. The Election Commission has sought a report on this incident.

In another appalling incident, the residence of Sanmoy Banerjee, who is BJP’s candidate from Panihati, was attacked with crude bombs on the night of Sunday, April 18th. The attack took place in the Kardhah Police station area, where Banerjee lives. Police have arrested one person in connection with the incident; investigations are underway.

Bike-borne miscreants had also thrown several country-made bombs at the BJP camp office on BT road, Sodepur and Swadeshi Chowk. Khardah police have retrieved one of these bombs that didn’t explode. Commenting on the unceasing violence, Sanmoy Banerjee alleged, “TMC people have resorted to these attacks as they know they are losing the polls. Police are acting as mere spectators.”

Again on 18th, unidentified miscreants opened fire at Gopal Chandra Saha, the BJP candidate from Malda when he was returning from a booth-level meeting.

The state has become a petrifying mirror image of Kashmir with crude bombs explosions befalling various residential areas. Ahead of the 6th phase of the elections, GC Road in Titagarh echoed with one such explosion. Police rushed to rescue two people from the debris and hurried them to BN Bose Hospital. However, 28-year-old Rajkishore Jadav couldn’t be saved and passed away; the other injured person has been shifted to another medical facility in Kolkata.

Bombs were also planted in the NJMC jute mill area in Titagarh, within proximity to BJP leader Santosh Jena’s house. On examining the area, police recovered 2 live bombs. Residents of the area are terrorised.

Crude bomb blasts also occurred in the Bijaynagar area in Naihati. Police have since visited the place and ‘investigations’ are underway.

In Asansol’s Barabani, BJP workers were attacked ahead of a public meeting by BJP leader Suvendu Adhikari on Friday evening. Armed goons with Trinamul links attacked BJP workers and set at least two motorcycles on fire in the Gourandi Hattala area of the town to disrupt the meeting.

Miscreants carrying swords and machetes were seen strolling through the Birbhum district. This is a violence-prone area where the TMC won 42 Zila Parishad seats ‘uncontested’ in 2018. One BJP candidate who had dared to file a nomination was forced to withdraw his nomination at gunpoint.

The TMC supremo Mamata Banerjee has recurrently complained about the presence of the Central security forces in the state during the ongoing election, labelled them as ‘outsiders’, and she and other TMC leaders have incited mobs to attack the central forces. That such violence and mayhem continues to occur despite the presence of central forces, is proof of the lawlessness and anarchy that has percolated across West Bengal under her rule, and the 34-year-long Communist regime before her.