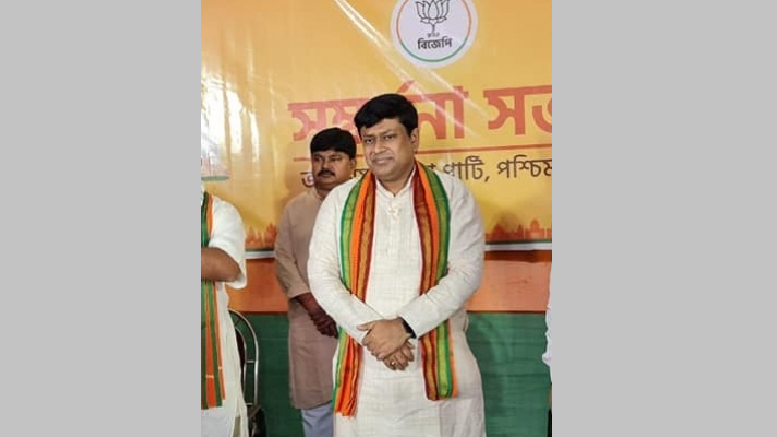 The top Bengal BJP leadership, including state unit chief Sukanta Majumdar, got engaged in a scuffle with the police after they tried to stage a demonstration with the body of defated BJP candidate from Magrahat West, Dhurjati Saha, in front of Chief Minister Mamata Banerjee’s residence in Kalighat on Thursday evening.

Saha, who had unsuccessfully contested the Assembly elections from Magrahat West in South 24 Parganas district on a BJP ticket, was reportedly beaten up by goons of TMC MLA Ghiasuddin Mollah on the day of counting of votes on May 2. Saha, who had suffered serious head injury in the attack, died after prolonged treatment on Wednesday. The family has demanded a CBI probe into Saha’s death.

The incident took a new turn on Thursday when the BJP leadership, including newly-appointed state unit chief Sukanta Majundar, MP Arjun Singh and the party’s Bhabanipur bypoll candidate Priyanka Tibrewal, led a huge rally with Saha’s body to protest in front of Chief Minister Banerjee’s residence in Kalighat that falls under the Bhabanipur Assembly constituency.

To avoid any breach in security, the police tried to move the body which triggered the tension.

When the police were trying to move the vehicle carrying the body of Saha, Majumdar rushed and sat in front of the vehicle. A fracas ensued after the police tried to remove Majumdar from the spot.

Majumdar stuck to his ground and said, “The people of entire West Bengal are watching. Is this democracy? See what Mamata Banerjee is doing. They are killing democracy but the police cannot stop us. We will again meet on the battle-field.”

Arjun Singh, who was next to Majumdar, said, “The family wanted to meet the Chief Minister and demand justice for Saha. And this is what they are getting in return. The police are forcing them out of the place. This is the Chief Minister of Bengal. There is no rule of law, only the rule of the ruling party. They are murdering democracy.”

Reacting to the incident, Trinamool Congress leader Tapas Roy said, “One should understand that they are protesting in front of the Chief Minister’s residence, which is a high-security zone. The CM has been provided Z-plus category security. This cannot happen. They (BJP) are doing this with an ulterior political motive. He (Sukanta Majumdar) has got the responsibility recently and he is trying to be in the news, but this is not expected from a person who has done his Phd. He should have been more rational.”

The police, however, said that there was an unruly gathering near the residence of the Chief Minister which they have cleared.

(The story has been published via a syndicated feed with a modified headline to conform to HinduPost style-guide.)