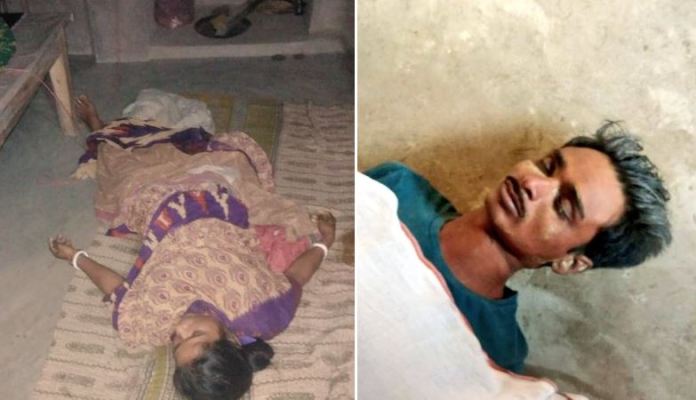 The world may have come together to fight the war against Corona, West Bengal is silently preparing for the war of votes during next year’s assembly elections. Keeping up with the tradition of violent politics that the state has become renowned for after 4 decades of brutal CPM & TMC rule, even in such unprecedented times political murders continue to mar Bengali society.

Adding to the extended list of murdered BJP members, RSS workers and Hindu activists in the state, BJP’s  Panchayat candidate hailing from Kultali village in South 24 Parganas district, Shakuntala Haldar (32) and her husband Chandra Haldar (37) died under mysterious conditions on April 6th. The news was broken on social media by BJP Bengal’s official Twitter handle. “The world may be busy fighting Corona but political killings are still continuing in West Bengal,” stated the BJP handle.

Shakuntala Haldar, a BJP candidate for panchayat polls and her husband Chandra Haldar were brutally murdered in Kultali, West Bengal.

The world may be busy fighting Corona but political killings are still continuing in West Bengal. pic.twitter.com/CA22Dcrd0Q

BJP local leader Sayantan Basu stated, “People are not thinking about anything else expect for fighting Coronvirus at the moment, but even in such troubled times violence in Bengal doesn’t subside. Our party members have been killed inside their own house; Trinamool is directly connected to these murders. Though the local BJP body demanded an immediate arrest of the murderers, they doubt if the state machinery would do so. We our informing the high-ups in central government about the conditions in Bengal.”

Local TMC members have denied any involvement and termed these ‘unfortunate’ deaths.

Dead bodies of the husband and wife were recovered from the premise of their house itself. While Shakuntala Halder’s body was found inside the house, lying on the bed in her room, her husband’s corpse was found in the backyard of the house, hanging from a mango tree. Here, we would like to remind our readers that the Mamata Banerjee ruled state has earned itself a notorious reputation as the victims of ‘political killings’ are often found hanging on trees or electricity towers.

In November 2019, a tribal BJP worker from West Medinipur, Barsha Hansdawas, was hanged to death in Datan area, allegedly by TMC goons. In May 2018, 20-year-old Trilochan Mahato, who was also a BJP activist in the state, was kidnapped and killed. His body was found hanging from a tree with a poster stuck on his back that declared his killing as a ‘punishment for signing up with the saffron party’. In June 2019, an RSS worker and a BJP worker were found dead and suspended from trees at different localities in Howrah district.

The death of Bhimchandra Haldar has uncanny resemblance to the ones listed above. Many locals suspect political rivalry as the reason for the Panchayat candidate and her husband’s sudden death.

The 2018 Panchayat elections in WB were bloody & farcical. If ever the phrase ‘murder of democracy’ was justified, it was for this election. The polls were marked by murder of at least 27 opposition workers and candidates, rape, widespread rigging, violence and intimidation of voters. In an unprecedented mockery of the electoral process, Trinamool won 34% of nearly 58,000 seats ‘uncontested’ as there was no rival candidate.

The iconic image of the election was the hanging body of BJP’s Dalit worker Trilochan Mahato, murdered hours after Mamata’s nephew MP Abhishek Banerjee declared at a rally that the ruling TMC would make Purulia “Opposition-free”.  One report based on official statistics says that between 1999 and 2016, political violence in West Bengal claimed 365 lives, an average of 20 ‘political murders’ every year.

Media, judiciary and Lutyens’ intelligentsia have all, by & large, turned a blind eye to the lawlessness in West Bengal, as Mamata Banerjee is an icon of ‘secularism’.

In recent times we have seen even state Chief Ministers like KCR, who have always been opposed to PM Modi, cooperate with him to fight the fatal pandemic. But West Bengal’s chief stays adamant on her abrasive, vindictive politics: whether it is silencing a doctor who raised the challenges faced by front-line warriors, or objecting to color of PPE kits provided by the center. Even in the face of a contagious outbreak, the TMC members have not been able to rise above petty politics.