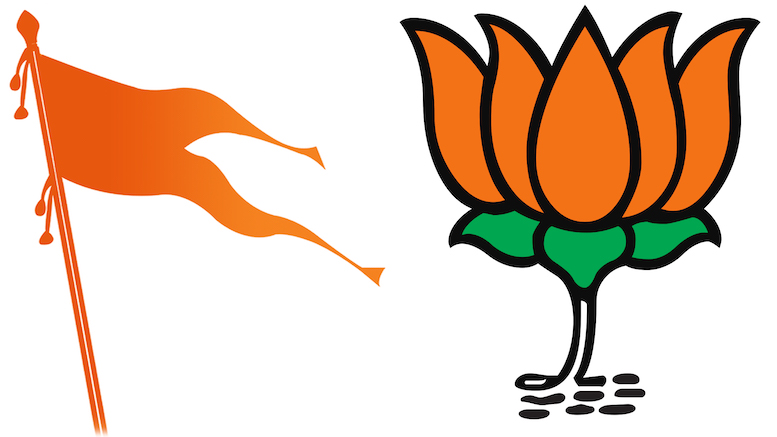 Given the alarming spurt in anti-Hindu and anti-national utterances by advocates of the Break-Bharat brigade, the pressing need to create an extreme Right pressure group within the BJP to push the cause of Hindutva is becoming evident every passing day.

It is not as if the accommodative sabka saath sabka vishwas approach persistently reiterated by prime minister Narendra Modi has not worked. It has delivered as much as it could in six years. But the law of diminishing returns now seems at work. None of the open-ended goodwill has had the slightest impact on jihadis, urban Naxals, and their pseudo-secular brethren. They continue to sow seeds of poison in the polity. The pestiferous ejaculations of the Delhi Minority Commission chief, Zafarul Islam Khan, are only the latest in the periodic perorations of Islamists against Hindus.

The gruesome killing at Palghar (Maharashtra) of two innocent sadhus belonging to the Juna akhada right under the nose of the police should, ideally, have sparked a fierce national outrage and ground protests from Hindus. But apart from the usual noises emanating from well-known handles on social media, it is business as usual. Even the PM did not react. The deafening silence from Union home minister Amit Shah continues to rankle. But this is probably because he has been asked to keep a low profile after the BJP’s rout in the Delhi assembly polls.

Shah kept his lips sealed right through the anti-CAA protests at Shaheen Bagh. It offered a readymade platform to educated scums like Sharjeel Imam to deliver some of  the most incendiary speeches in recent history. He threatened to mobilize five-lakh Muslims and cut off Assam from the rest of the country. Imam may be cooling his heels in jail on charges of sedition, but he did the damage. The Delhi riots this February were the direct result of the government’s abysmal failure to suppress Shaheen Bagh.

BJP insiders admit that an “image conscious” prime minister does not want any adverse publicity in the western press till things have stabilized, especially with the fight against the novel coronavirus having taken front seat. Whatever long-term political strategy the PM is likely to have had in mind to deal with the repeated provocations from Islamist hotheads will now necessarily have to be pushed back till the economy is back on rails. The wait may be longer than imagined. In fact, the situation may even further worsen with repeated lockdowns should the obstinate curve of the Chinese virus refuse to flatten. What do then? Wait for more venom to be injected by enemies of the state before acting?

The BJP leadership must be constantly pushed into realizing that keeping internal enemies at bay is not a task that can be put on hold till hunger is wiped out and everyone has a job. Only the foolish can envision such a scenario in a country of 130 crore people. Nothing suits our internal enemies more than see the government permanently embroiled in quelling economic crises while they prepare the ground for a political implosion.

Much mischief is already afoot in every part of the land. The dangerous face of the Tablighi Jamaat might never have been exposed had coronavirus not happened. Providence has its own singular way of warning us of impending doom. And it gives a long handle. The warning this time is three pronged: economic, environmental, and political. It is entirely up to us to read the tea leaves or sink further into the quicksand.

Herein lies the importance of an exclusive pressure group within the ruling dispensation. The sole task of such a group will be to keep badgering the PM not to lose the wood for the trees. Fire-fighting on the economic front has to run parallel with honoring core commitments, both stated and unstated. It cannot be one or the other. We know what they are, but lack the resolve to espouse them. That Bharat remains a Hindu nation despite the fraudulent addition of the word “secular” to the Preamble by Indira Gandhi needs to be mentioned upfront.

Putting out penal measures to check population growth, drafting a Uniform Civil Code, and rehauling education will have to get the primacy they deserve, and the envelope on each relentlessly pushed. Not a leaf has moved on any in the last six years. Cutting corners on defense and policing budgets cannot be brooked any more given the mounting threats, both internal and external. Judicial appointments will need to be carefully vetted to ensure that only those who place a premium on our time-honored cultural traditions (sanskriti) find a berth. The nation cannot afford to have Supreme Court judges like D Y Chandrachud with minds enslaved to faux western values.

The Sangh has been a robust gatekeeper of our values but its frequent advocacy in the last few years that Muslims be seen part of the larger Hindu family is something no Muslim has ever accepted nor will in the future. Allah’s jihadi followers have nothing but contempt for such a notion. The real face of even supposedly secular Muslims now stands exposed. The script-writer and lyricist Javed Akhtar has been at pains on social media to present a bloody tyrant like Alauddin Khilji in good light. Akhtar falsely claimed that Khilji constructed forts in Kandahar and stopped Mongols from invading Bharat, thereby doing us a great service. The Sangh’s greatest sarsanghchalak, Guru Golwalkar, had grasped the truth decades ago. Seculars dubbed him a Muslim hater which he was not. Guru ji’s “bunch of thoughts” need to be given pride of place again.

A pressure group within a party can be of immense use. More often than not it can compel the party to stay on course, even breathing new life into its existence. Post-1930 developments in our struggle for Independence offers a readymade example.

The civil disobedience movement had run aground in 1934 when the Congress decided to implement the reforms introduced by the Act of 1935. This helped the party sweep the polls in early 1937, and form the government in seven of the 11 provinces. The success of the welfare measures encouraged some members led by Subhas Chandra Bose to form a leftist pressure group within. The rapid growth of socialist ideas both inside and outside the Congress was a direct consequence of this move.

It led to the formation of the communist party led by P C Joshi as well as the Congress Socialist Party led by Acharya Narendra Dev. Bose’s own stature rose significantly. So much so that he went on to defeat Mohandas Gandhi’s nominee (Pattabhi Sitaramayya) in the presidential poll at the party’s 1939 Tripuri session. It is quite another matter that the wily Mohandas compelled Bose to resign his job, and quit the party. Bose went on to form the Forward Bloc and the rest, as they say, is history. Now imagine how different things might have been had Bose been allowed to take control of the Congress.

The Right and Left camps within the Congress date back to the latter half of the 1930s. It expanded the party’s appeal, and helped it dominate national politics for several decades. Many feel that the future contours of national politics will not be set by the outdated Right versus Left narrative, but by the Right versus Extreme Right tussle for mind space. The BJP must pave the way for such a contestation of ideas to keep its relevance intact.