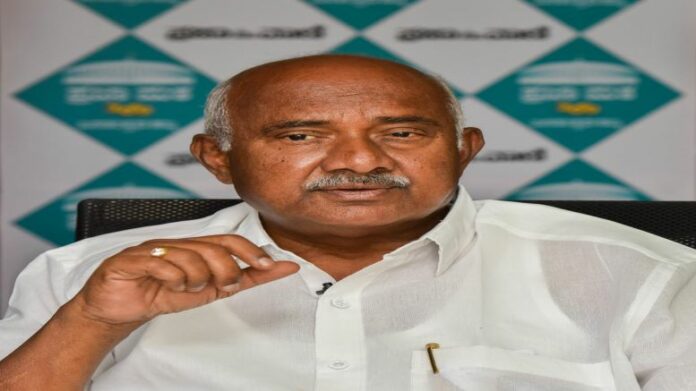 Amid threats from Hindu groups and the BJP government’s disinterest, Tipu Sultan Jayanti was celebrated in various parts of Karnataka on Thursday (November 10).

Members of the All India Majlis-e-Ittehadul Muslimeen (AIMIM) celebrated Tipu Jayanti on the premises of Idgah Maidan in Hubballi amid the opposition. AIMIM Joint Secretary Vijaya Guntrala and other leaders participated in the programme.

Tipu Sultan’s portrait was garlanded, floral tributes were paid and verses of the Quran were read. The AIMIM leaders also shouted slogans hailing Tipu Sultan. After the programme was over, the police immediately shifted the photos and flexes of Tipu Sultan from the Idgah Maidan grounds.

Meanwhile, breaking from the party stand, BJP MLC H. Vishwanath, participating in Tipu Jayanti in Mysuru, said that no one should attempt to distort the history of Tipu Sultan’s struggle against the British. “Tipu Sultan is a symbol of self-respect of the land. The administration, valour, and bravery of Tiger of Mysore, Tipu Sultan can’t be sidelined,” he stated.

“The allegations on Tipu Sultan that he killed 80,000 people and converted 40,000 is fictional. When compared to the population of that age, the argument will not stand. Those who do not know about Tipu Sultan are indulged in propaganda against him,” he said. Vishwanath also said that Tipu Sultan is the only king who did not kneel down before enemies.

“It does not matter which party you belong to talk about Tipu Sultan. Despite being in BJP, I will say, Tipu is a proud Kannadiga, he is the tiger of Mysore. His personality is above all castes and religion. No one can change history. No matter what is being said, history will not change,” he said.

Vishwanath could take a lesson from his party’s IT cell head Amit Malviya who highlighted that Tipu was a barbarian and not a freedom fighter. “He was no freedom fighter. He was taking the help of the French, who were no less colonial than the British. Mysore would have become a French colony, like Pondicherry, if Tipu had won. He invited Zaman Shah from Afghanistan to invade India and establish an Islamic Caliphate wrote to Napolean to invade India and ensured French victory against the British. How are these the traits of a freedom fighter?”, questioned Amit Malviya.

Tipu invaded Malabar and thousands of Hindus and their temples were destroyed during his jihad. Tipu and his forces suffered a horrible defeat at the hands of the Nairs in Travancore during the battle of Nedumkotta. He however came back a second time. But this time the region was flooded due to heavy monsoon and he abandoned his plan to invade Travancore. Pretty soon after this retreat, Tipu was killed by the British during the battle at Mysore.

Shri Sandeep Balakrishna (author of Tipu Sultan; The Tyrant of Mysore) has unveiled the ‘real Tipu’, who was nothing but a tyrant, in his blog. He has pointed out how Congress propagated Tipu as a hero and freedom fighter myth to further its vote bank politics.

Primary sources, including Tipu’s own diaries and letters as well as accounts of contemporaries. His raids into Kodagu and Malabar show how brutal Tipu was and how he tortured Hindus. Around 4000 Kodavas of Coorg were taken prisoners, brutally tortured, forcibly converted to Islam and incorporated into his Ahmadi corps. Malabar still bears the scars of Tipu’s gory invasion when he razed Kozhikode to the ground. The tyrant did not even spare women and children. Mothers were hanged with their children tied to their necks.

Tipu himself proudly proclaims in his letter how ‘with Allah’s grace almost all Hindus of Calicut (Kozhikode) were converted to Islam’. He made no effort to hide his hatred for Kaffir Hindus and prove how committed he was to Islam. He not only changed the official administrative language from Kannada and Marathi to Farsi but also ensured that only Muslims were appointed to important military and administrative posts.

Tipu Sultan was an Islamic bigot and not a freedom fighter as Vishwanath would want us to believe. He could well do with some history lessons.