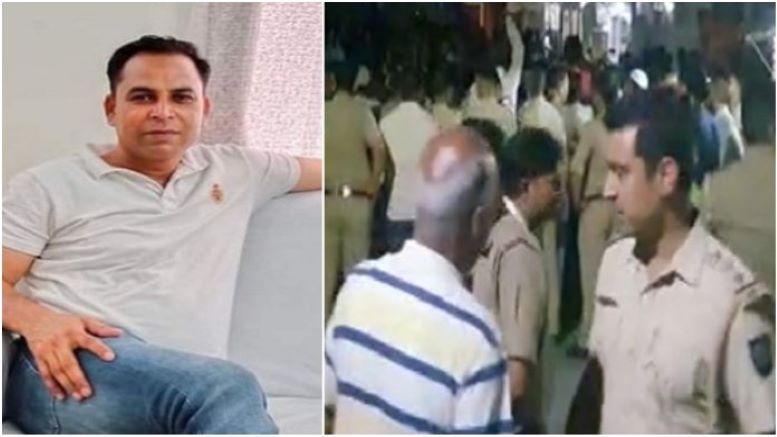 An OpIndia report on the matter said:

BJP minority morcha leader Naseem Naaz had claimed in a Facebook post that there is no Shivling in Gyanvapi, saying that no proof about the existence of the Shivling has been found. He had said the claim of Shivling is just a propaganda spread by media. He added that there is stone in his toilet too, and if searched, some important clue will be found.

“My toilet seat is also made up of stone. Please check that too. You never know that could also mosque, be a Shivling”, Malik addressed the Hindu devotees while commenting on thr Facebook post posted by Naseem Naaz that made similar derogatory remarks. Communal tensions escalated in the area as Islamists people gathered around the Paonta Sahib Police station in Sirmaur and raised anti-India and anti-Hindu slogans. They carried swords and lathis and protested against the arrest of Malik and Naaz.

According to the reports, several Hindu people then gathered in the areas and demanded discontinuance of the anti-India and anti-Hindu slogans being raised by the Islamists. The members of the Hindu organisation, Sanjay Singhal, Ajay Sansarwal, Vivek Saini, Mayank Mahawar, Hemant Sharma, Sachin Oberoi, Vaibhav Gupta and Garvit Gupta registered an official case against the duo for demeaning Lord Shiva and the Hindu religion. “The comment has hurt the sentiments of the Hindu people. Action must be taken against such people. The Shivaling, the form of the adorable deity Shiva, has been attached to a toilet in a very messy and indecent manner”, the members noted.

“Such remarks have been made deliberately to incite riots and social discord. Today on one hand, while whole the world is paying respect to Hindu deities, there are some anti-social elements who are making such remarks to incite riots. If action is not taken on this then Hindu society will be compelled to take to the streets”, they warned.

These insensitive remarks have come at a time when the Gyanvapi survey monitored by the court is underway and a Shivling is said to have been discovered in its wuzukhana. The Supreme Court has ordered to protect the site where the Shivling was discovered.

Reports state that BJP temporarily suspended Naaz from the post of minority morcha President and the party’s primary membership following the incident. However, the pertinent question to raise is should the so-called Hindutva party harbor such Hindudveshi (Hindumisic) elements?