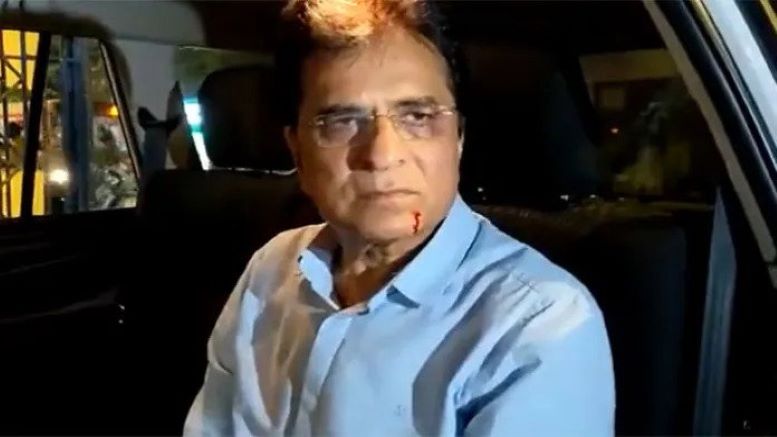 Reports state that senior BJP leader Kirit Somaiya was allegedly attacked by around 100 Shiv Sena hooligans yesterday who pelted stones and attempted to murder him. LoP (Leader of Opposition) Devendra Fadnavis condemned the attack and demanded stringent action against the perpetrators.

Kirit Somaiya posted a series of tweets in connection with the assault. “I am shocked, in the presence of 50 police persons, the compound/campus of Khar Police Station, Shivsena’s 100 Gundas assault me with stones, Wanted to kill me. What is the police commissioner doing? How so many Mafia Sena Gundas allowed to gather in the police station?” read one of his tweets.

One of the tweets had a video where the BJP leader was seen with blood on his face. The accompanying tweet said, “This is the 3rd time Uddhav Thackeray’s Gundas tried to KILL Me, first at Vashim than Pune & now at Police Station (Khar Mumbai) itself”.

“Mumbai Police has refused to lodge my FIR. Instead, they lodged a bogus FIR stating that only one stone was hurled. As many as 70-80 Shiv Sainiks attacked me. No action has been taken by Khar Police despite intimation”, Kirit told ANI News. DCP (Deputy Commissioner of Police) Manjunath Shinge informed the media that the police had already registered a case based on Somaiya’s complaint. He also assured that the Mumbai police would conduct an impartial investigation.

“I will speak with the home secretary and the home minister today over the attack on Kirit Somaiya and write a letter to take action against the Police, who are working as political workers. Despite Kirit Somaiya informing (the) Khar Police prior about the possibility of an attack and seeking Z protection, the Police did not take any action. Instead, they permitted Shiv Sena goons to attack the state government pressure”, Fadnavis said in his media interaction.

Incidentally, Kirit was on his way to visit the Rana couple arrested by the Uddhav Thackeray-led MVA (Maha Vikas Aghadi) government. The couple had announced they would chant Hanuman Chalisa outside the Thackeray residence.

The Police booked the couple under Sections 153 A (promoting enmity between different groups on the grounds of religion, race, place of birth, residence, language, etc., and doing acts prejudicial to maintenance of harmony), 34 (common intention) of the Indian Penal Code and section 135 (violation of prohibitory orders of Police) of the Maharashtra Police Act.

This isn’t the first time Shiv Sena hooligans have assaulted Kirit Somaiya. On August 20 last year, Somaiya’s car was attacked in Maharashtra’s Washim district near the Balaji Particle Board Factory belonging to Sena MP Bhavna Gawli. Miscreants hurled stones and black ink at the BJP leader’s car. Somaiya was in the vehicle when the attack took place around 12.30 in the afternoon.

On February 5 this year, Kirit Somaiya was attacked by Shiv Sena goons in Pune. Somaiya was in the city to lodge an official complaint against Shiv Sena leader Sanjay Raut’s close aide and partner Sujit Patkar in the Lifeline Hospital Management Services scam case worth Rs 100 crores during the COVID19 pandemic.