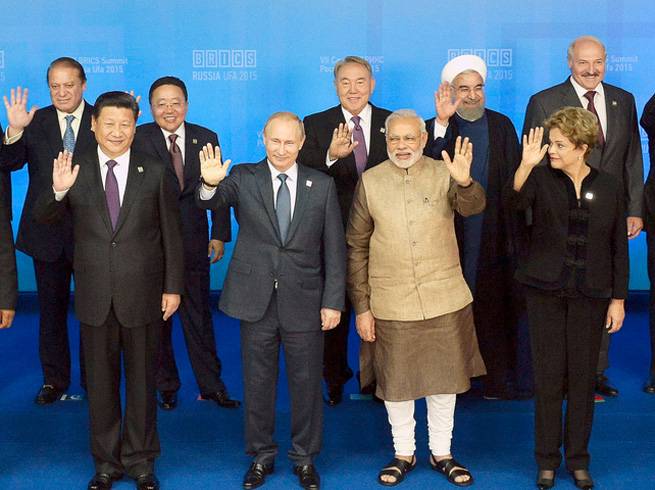 Non alignment was a myth and it could never be a foreign policy stand. Non alignment was an indecisive stand where Bharat was oscillating between a capitalist country like USA and communist nations like Russia and China. Sometimes indecisions lead to decisions by default, and Nehru’s non alignment was one such example.

Indira Gandhi supported East Pakistan to get liberated into a new country Bangladesh, and she was friendly with Russia which caused an eye sore to USA. Nepal and Bhutan were aligned with Bharat and Sikkim became a part of Bharat during her tenure. She was a staunch supporter of Palestine and was against the hegemony of Arab countries and USA in the Gulf region. Indira Gandhi had an advantage of being Nehru’s daughter – this gave her ample exposure to the international arena and acceptability by global leaders when she was the Prime Minister, as she already had good acquaintances to smoothly kick start her foreign relations.

During Rajiv Gandhi’s tenure as Prime Minister in 1987 Bharat re-occupied the Quaid Post in the disputed Siachen region of the Indo-Pakistani border after winning what was termed Operation Rajiv. In 1988, a coup in Maldives was averted when Bharat sent its soldiers. The Indo-Sri Lanka accord in 1987 antagonized LTTE which finally resulted in the assassination of Rajiv Gandhi.

Bharat’s true foreign policy started only during PVNRR’s term as Prime Minister. Bharat opened up to Israel to have formal friendly relations. The balance of payments crisis in Bharat which necessitated liberalization of Bharat’s economy out of compulsion but not by choice also coincided with disintegration of USSR. This made PVNR to swiftly tilt towards USA. Bharat’s trade with USA increased by leaps and bounds and boosted Bharat’s software exports to USA.

PVNR’s vast experience as union cabinet minister and his stint as external affairs minister helped him in evolving a true foreign policy for Bharat. PVNR was a visionary and the look east policy that we are now talking about was first pioneered by PVNR. The ground work for Pokhran-II, Operation Shakti to enhance Bharat’s nuclear capability, was done by PVNR and it was executed by his successor Vajpayee in 1998.

Tensions escalated between Bharat and Pakistan that led to Kargil war in 1999 which Pakistan lost. Pokhran –II led to a somewhat strained relationship between Bharat and USA. However, under Vajpayee’s tenure Bharat could reestablish its cordial relations after three years of persistent efforts. In 2003, China officially recognised Bharatiya sovereignty over Sikkim as the two countries moved towards resolving their border disputes. In 2003 IBSA (India-Brazil-South Africa) a trilateral, developmental initiative to promote South-South cooperation and exchange took place. Vajpayee also revived the ties with Russia by signing significant trade and defence pacts. Continuing PVNR’s initiative of look east, Vajpayee strengthened Bharat’s relations with ASEAN countries.

Dr. Man Mohan Singh who became the Prime Minister after Vajpayee was able to establish the Indo- US Civil Nuclear pact in 2005, which was a major achievement although operationalizing the proved challenging. During Man Mohan Singh’s tenure in 2005 the Bharat-Myanmar-Thailand Trilateral Highway (TH) project under the Mekong Ganga Cooperation Initiative was started. It was one of the vital projects to improve cross border connectivity between Bharat and Myanmar to take Bharat’s look east policy to the next level. In November, 2006 Nathu La pass (in Sikkim) was reopened for trade after remaining closed for more than four decades. Bharat’s bilateral trade with China improved rapidly though resulting into Bharat’s continued and increasing trade deficit with China.

Man Mohan Singh improved Bharat’s relationship with Afghanistan and Bharat started several infrastructure projects in Afghanistan. The ‘India-Japan Strategic and Global Partnership’ was another major foreign policy initiative of the Manmohan Singh government. Man Mohan also tried to step up investments between Bharat and Israel. Probably the biggest failure of Singh’s foreign policy was his inability to contain Pakistan-based Islamic terror – the 2009 Sharm-el-Sheikh joint declaration between Man Mohan Singh and Pakistan PM Gilani, which painted Bharat and Pakistan as equal victims of terrorism and also legitimized Pakistani allegations about Bharat’s interference in Balochistan, was a monumental blunder. Singh’s foreign policy was termed as Manmohan Doctrine which was a global trade-centric approach in shaping Bharat’s foreign relations.

Narendra Modi is a novice to global relations as Bharat’s prime minister compared to his predecessors since he did not have much global exposure before he became the PM. However, he has picked up fast the nuances of foreign relations and diplomacy. While Man Mohan Singh adopted a soft but trade-centric foreign policy and continued the approach of PVNR in some ways, Modi has so far exhibited a reasonably aggressive and assertive stand in Bharat’s foreign relations. He is also placed in an enviable position due to the terrorists’ intrusion from Pakistan to Bharat (particularly in Jammu and Kashmir) followed by China’s open support to Pakistan and engulfing Bharat by China through OBOR (One Belt One Road ) which necessitated Bharat’s aggressive buying of weapons from arms making countries like USA, Russia, France and Israel.

Sometimes crisis creates opportunities and Bharat’s defence needs have thrown vast opportunities to talk at the same wave length with countries like USA and Russia, whereas Bharat’s vast market potential has given it better negotiating power with countries like Japan and China that are hungry to grab the large Bharatiya market through trade and investments. Currently, Modi is riding on this positive wave and his assertive and aggressive traits as leader have given him certain advantages in bilateral negotiations with other countries. While Man Mohan focused more on global trade and Bharat’s defence needs were given lesser priority, Modi is now compelled to step up Bharat’s defence capabilities and at the same time sustain its global trade and do a balancing act.

Modi’s foreign policy success will be evaluated based on Bharat’s ability to counter Pakistan sponsored terrorism, combating OBOR strategy of China through Asia-Africa Growth Corridor (AAGC), Cotton route and Project Mausam and Bharat’s entry into NSG. While Bharat’s entry into NSG under the current geo-political scenario appears to be difficult, the other things mentioned above have the chances of getting materialized, provided Bharat is able to muster the whole hearted support of the stake holding countries and rope in capable technology and financial partnerships. Modi’s challenge lies in garnering the support of small neighbouring nations to insulate Bharat and the South-East Asian nations from the threats posed by Pakistan sponsored terrorism which is tacitly supported by China.

Modi is now trying to connect the dots by tying up the loose ends in Bharat’s foreign relations and his foreign policy stand will be known only when he draws the picture by connecting those dots.