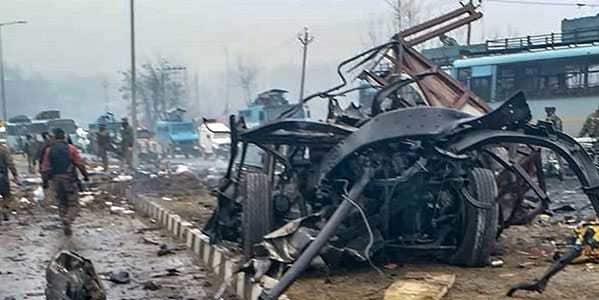 We have demonstrated our anger. We have commiserated with the families of the deceased. We have fulminated at Pakistan. We have strategised on Twitter.

We have demanded that the government declare war immediately. Our political leaders have thundered. They have saluted the bravery of the martyred. They have demonstrated that they stand united. And they have even managed to come out with a vacuous statement on the tragedy. Soon, both we and the political leaders will move on. We will move on to the more mundane stuff of day-to-day existence.

The political class will move on to their bread and butter, fighting for the next elections. Our anger will subside as the more immediate song-and-dance buffoonery and never-ending cricket spectacle on TV will demand our attention. The political leadership will get busy having a go at each other with such seriousness that national security imperatives will become marginal in its scheme of things.

It is extraordinary to witness this state of affairs today. Most commentaries are so devoid of reality that it is painful to see the hypocrisy ingrained in this ‘discussion’. The reasons of the tragedy called Kashmir are well-known.

If there is one national security issue with which we all get familiar with since our political coming of age, it is Kashmir. All of us know the real source of trouble. And, yet, for the last seven decades, all we have got are clichés in the name of policy.

The façade of ‘Kashmiriyat’, the so called ‘mainstream’ political parties in Jammu and Kashmir, the political solution, democracy as an antidote, ‘it’s not about religion’, the need for soft borders, people-to-people contacts.… all this balderdash has been bandied about by sections of the media, bureaucracy, experts and, of course, politicians.

This, despite the fact that ever since Independence, Pakistan has made no qualms about what the real struggle in Kashmir is all about. And it has gone about pursuing that objective with a single-minded dedication, even at the cost of its other interests, as the present turmoil in Pakistan underlines.

Meanwhile, we continued to delude ourselves with narratives we created to satiate our own inability to come to terms with our failure. First, ‘Kashmiriyat’ was supposed to deliver us from evil.

Then we put our lot behind ‘mainstream’ Kashmiri political parties and, in the process, got the worst of both worlds — corrupt, inefficient governance in Kashmir and mouthpieces to the Pakistani agenda.

We even decided to go down the route of force, thinking that classic counterinsurgency will solve the problem even as we wanted to tom-tom our democratic credentials. Of course, when the world chided us, we wilted.

And, so, we blamed the world. The Americans are to be faulted for Pakistani intransigence because they have been the great benefactors of our neighbour’s military-industrial complex. Now, the Chinese are the real culprit because they have been shielding Pakistan in the United Nations Security Council (UNSC) and doling out money to save Pakistan from an economic meltdown.

It is laughable to suggest that Bharat’s security planners do not have any choice when it comes to responding to Pakistani terrorism. The drill is well-known, and the options have repeatedly been presented to Indian policymakers. The real issue is how much cost we, as a nation, are willing to bear to take on Pakistan.

It is easy to shout on Twitter. But it was the same Bharatiya public and media that once forced the Atal Bihari Vajpayee government to release the later Jaish-e-Mohammed chief, Masood Azhar, in exchange for passengers of Indian Airlines IC-814 that was hijacked and flown to Kandahar in Taliban-ruled Afghanistan in December 1999. Bharatiya policymakers recognise this, and so they too are happy in taking a softer line.

Vajpayee’s bus journey to Pakistan, Manmohan Singh’s soft border proposal and Narendra Modi’s outreach to Nawaz Sharif follow a pattern. Why frame a strategy to deal with the root cause when tactics would suffice? And if a major crisis happens, then they can talk about the redundant most favoured nation (MFN) status, or about reviewing the Indus Waters Treaty, or — lo and behold — about presenting the evidence of Pakistani shenanigans to the world.

The Modi govt’s surgical strike in 2016 did draw a line insofar as by publicly acknowledging surgical strikes, New Delhi put the onus on Islamabad-Rawalpindi to escalate. But instead of using that to frame a sustained policy, Bharat ended up celebrating it as Bollywood-style razzmatazz.

Nations, when faced with a sustained threat, always have choices. And Bharat’s choices over the past few decades haven’t moved beyond issuing demarches, summoning ambassadors and relying on the benevolence of others. Forget challenging Pakistani military establishment directly, we won’t dare to even challenge it indirectly in Afghanistan, where we are busy showcasing our soap operas and film music.

And this is a country that wants to be recognised as a major power. A nation that doesn’t have the self-confidence of tackling its pre-eminent national security threat on its own will neither earn the respect of its friends nor will it be able to manage its adversaries.

(This article was published on The Economics Times and has been reproduced here in full.)