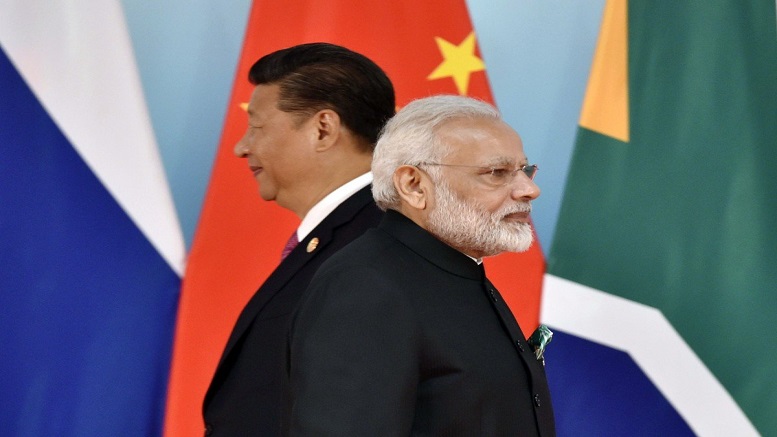 Treacherous and hegemonic China needs to be dealt with militarily rather than diplomatically as it only understands the language of muscle power. The Doklam stand-off in 2017 was one such example and the Galwan valley deceit & back stabbing in June 2020 is another.

As China backtracks from the flashpoints after NSG Ajit Doval and Chinese foreign minister Wang Yi engaged in a meaningful dialogue their is every likelihood that the dragon known for its pugnacity and bellicosity will open another front most likely in the eastern sector in the near future. China has wrecked havoc and tyranny on the world through its biological warfare which the world has come to know as Covid-19.

China is responsible for the death of over half a million people worldwide till now but that has not deterred it from pursuing its expansionist and aggressive agenda of forcibly encroaching upon other countries territories including Bharat, Japan, Vietnam, Taiwan, Indonesia and Tibet to name a few. The attempt to gain control over the Galwan valley by China is one such example.

Bharat cannot let go this opportunity of pinning down China and making it bite the dust in the western sector and thus, take revenge for its 1962 defeat where poor intelligence and non use of the air power cost Bharat the war. Bharat needs no diplomatic sanctions to take on untrustworthy China as it has the automatic sanction of countries that matter.

NSA Ajit Doval called up the Chinese foreign minister to press for disengagement and apparently Chinese are withdrawing from the flashpoints particularly patrol point 14 which was the scene of the clash and bloodshed but knowing their deceit and bellicosity there is no guarantee that they won’t come back. Bharat can also reclaim its lost territory of PoJK and Aksai Chin with twin strikes over PoJK and Aksai Chin with the use of its air force.

Remember that China has just 3 airfields in Tibet namely Hotan, Hoping and Lhasa from where its fighter jets can take off with half fuel and half pay load. Chinese aircraft IL 78 was recently seen at the Skardu air base in PoJK’s Gilgit baltistan and in the a war scenario the Chinese are most likely to use the Air bases in PoJK for fueling and take off.

Pakistan has similarly used the Skardu airbase for joint air exercises with China and its JF 17 fighters have been seen flying from Skardu to Hotan in Tibet. There have been reports that Pakistan has built another airfield in Mansehra along the khyber Pakhtookwah region in PoJK which is just 150 kms from Srinagar.

Since the Tibetan airfields in Hotan and Lhasa are situated at a height of 4000 meters and above the Chinese jets will be handicapped with their gasoline and firepower. Herein lies the for Bharat as in the event of a war with China the Skardu airbase can be captured by Bharat to deny the Chinese jets any refueling or take off facility. This will not only get us back our territory (Gilgit Baltistan, which is a part of PoJK) but also cut off the landing, refueling and take off of Chinese jets from PoJK.

Our fighter jets which will be operating from the plains of Punjab (Ambala and Pathankot) with full fire and fuel can pummel the 3 Chinese airbases in Tibet to make one or two inoperative thus setting them on the backfoot. Due to the Covid-19 pandemic, the international opinion is heavily loaded against China and the dragons unrelenting hegemonic and expansionist inclinations has further antagonized countries like America, France, Australia, Japan, Vietnam, Indonesia, Taiwan to name a few.

Bharat will not get such favourable and conducive international terrain to push back China in Galwan and reclaim Aksai Chin and also PoJK if Pakistan allows its airbases to be used by China.

China has left no stone unturned to transgress and make incursions on Bharatiya territory apart from blocking Bharat’s entry to the NSG, interfering in Bharat’s internal affairs by opposing the scrapping of article 370 and siding and supporting Pakistan overtly and covertly in its terror war against Bharat (delaying the designation of Hafiz Sayed and Masood Azhar as international terrorists).

Bharat will not be able to muster and get the backing of America & Europe for decades inspite of its best diplomatic initiatives as it has now. America has already turned on the heat on China by sending its two aircraft carriers in the South China sea and the NATO allies are sure to toe the line of the Americans in the current scenario.

Bharat will never get such a feather bed international opinion to tame China’s belligerence and aggression and fulfill its objective of reclaiming its lost land (PoJK and Aksai Chin) which has been ceded to both its arch rivals due to the blunders of our first Prime Minister. The time has come for Modi to pull the plug and take China headlong and his lion roar in Leh was the right tone to take on the notorious dragon.

Bharat currently enjoys the full backing of a majority of nations that count in modern warfare. Russia the biggest weapon supplier to Bharat and the country which has the longest border with China will at best remain neutral. Bharat should be prepared for a two front war in the western sector with an aim to push back China in Galwan and annex PoJK to cut off the China Pakistan axis if Pakistan allows the Chinese jets to operate from its Skardu airbase which looks inevitable.