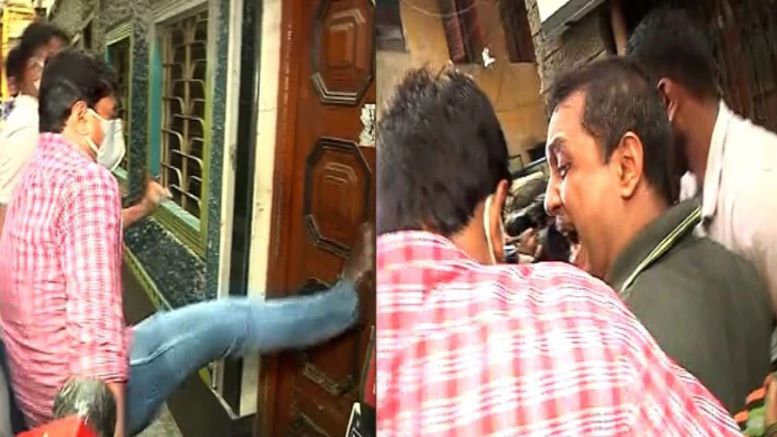 While Mamata Banerjee is all set to mark her presence at a peace conference to be held in Rome, Italy, followers of the TMC matriarch are leaving no stones unturned to cause chaos and unrest in West Bengal and lead the state down the path of anarchy. Unfortunately, the Police have been of no aid for the hapless citizens who have gradually become the targets of the ruling party’s ire; in many alleged cases, they have shamelessly played into the hands of TMC hoodlums to implicate supporters or workers of the opposition.

One such incident took place in the heart of the capital city Thursday-Friday last week. On Friday, August 13th, police officers of Muchipara police station broke into BJP leader Sajal Ghosh’s residence and detained him. The arrest took place following some uncorroborated allegation of assault of a TMC member’s wife and an alleged attack on a local shop.

As per reports of popular news sites, the wife of a TMC leader was molested by two BJP workers on Thursday; responding to her complaint the police had arrested the two. Protesting this arrest, Sajal Ghosh led a violent attack on a shop located at Raja Rammohan Sarani the next day. Upon receiving a complaint from the owner of the shop where allegedly the attack took place, a team from Muchipara police station headed for Ghosh’s Santosh Mitra Square residence.

“As the family was not opening the door, an officer told them through an open window that an FIR had been registered against Ghosh and he was expected to go to the police station,” informed a source.

The police officer had warned family members that if Ghosh didn’t cooperate with them, they would forcefully break into the house. And Ghosh refused to turn himself in, three police officials started to kick the door till it broke apart. The BJP leader was at once arrested and escorted to Muchipara police station, just a few hundred meters from his place. Officers that are not handling this case state that it is rather unusual for police officials to break into someone’s home unless the accused was a known criminal with flight risk. The case has attracted heavy media attention and political scrutiny. However, what we found in almost every report was a one-sided skewed narration of events.

To understand the case from all angles, the HinduPost contacted Devdutt Maji who is a known BJP member in the city, was a BJP candidate from Chowrangee Assembly and was a witness to the proceeding of the case throughout.

Condition inside Muchipara Police Station,Central Kolkata (Last Night) where TMC Goons had stormed in to take us out & kill us.

Vishal Singh, a @BJP4Bengal activist was thrashed & his shop was vandalized then he was taken to PS.
Last night Sajal Ghosh & I went for his Support
🕉️ https://t.co/vz78oRN7ap pic.twitter.com/3tMf5pCpDi

Dutt informed the HinduPost correspondent that with parts of Kolkata remaining submerged in floodwater, a plywood shop owner Vishal Singh had taken up to repair his shop on Thursday, 12 August 2021. Singh was a known BJP supporter and worker in the area who had actively campaigned for Maji during the 2021 Assembly elections.

While Vishal was busy with the repair work, some cops came and demanded a hefty amount to allow him to continue repairing the shop. When Vishal refused to pay the amount, he was consequentially picked up by the cops and detained for 5 hours.

After spending 5 hours at the police station, Vishal was allowed to leave. He went to the shop and continued with his repairing work when a mob of TMC goons arrived at his plywood shop and started to ransack the same, says Devdutt Maji. There were also a few women workers of the TMC among the vandals who were taking down the shop. Soon police reached the spot again, at this time the women TMC workers present there accused Vishal of molesting them, on accounts of which Vishal was again apprehended by the officials and taken to the police station.

Upon reaching the police station, Vishal saw the presence of around 20-30 TMC goons. Vishal insisted on writing a complaint about the attack on his shop. By this time, both Devduttha Maji and Sajal Ghosh, being local BJP leaders, reached the station to support the BJP worker being harassed.

Soon after Maji reached the station, around 70 – 80 TMC goons tried to enter the Muchipara police station and attack them, alleged Maji. Due to the presence of center provided security guards, no major harm was done to the three, however, one woman did fling a bottle at them, and some goons threatened them that they would meet the same fate as BJP worker Abhijeet Sarkar in front of the police that was merely a mute spectator there. Maji asserts that TMC top dog Debashish Banerjee and local Councillor Moushumi Dey had planned and executed this conspiracy against the three of them.

Eventually, Vishal was sent to a 3-days-custody. On the other hand, the vandals who had plundered Vishal’s shop lodged a complaint against Sajal Ghosh accusing him of vandalizing a local shop and committing theft, says Devdutt Maji. He also claimed that the arrest of Sajal Ghosh was made without an arrest warrant. Vishal Singh and Sajal Ghosh are in Police custody as we report on the matter. Investigations are underway.