Battleground Himachal – The Road To Victory Goes through Kangra District As both the parties  finalise the list of candidates for the November 9 polls. the list of rebels within both the BJP & the Congress is growing by the day and is a manifestation of the battle within the two main parties, thus adding spice to the main electoral battle ahead.

Party loyalists who have turned rebels after being denied party tickets due to internal bickerings within both the parties are set to influence the number game and results in the final countdown. Key constituencies in Kangra district like Palampur, Kangra, Shahpur & Dharamshala are set to witness multi-pronged battles due to rebels jumping in the fray.

The road to victory inevitably goes through Kangra district and history is testimony to that. In the 2012 elections Congress emerged victorious in the State with a solid chunk of 9 seats coming from Kangra, not without the help of the BJP which could manage only a miserable 3 seats due to infighting. In 2007 elections, however, due to it’s solid performance in Kangra district where it won 9 seats the BJP romped home victorious in the State. 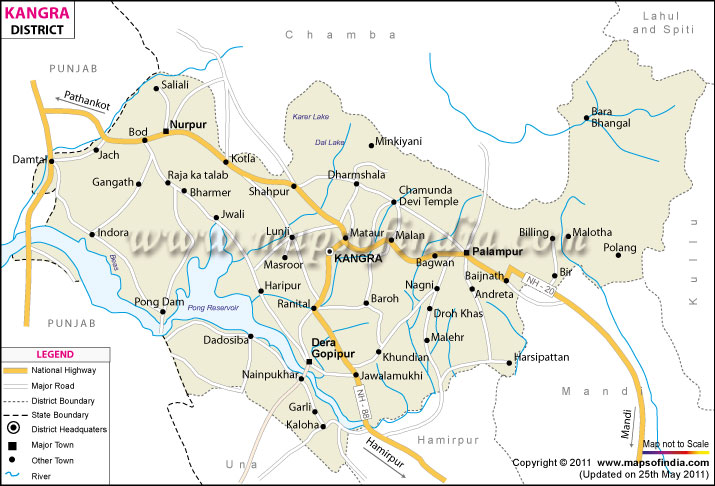 After the delimitation exercise in 2009 the number of seats in Kangra have been reduced to 15. The cat & mouse game between the BJP & Congress in Kangra was evident in the 2003 elections where the Congress clinched Kangra – winning 11 seats- and thus was easily able to form the government.

Dhumal becoming the Chief Minister of the State for the first time in 1998 was largely due to the spectacular performance of the party in Kangra district where it won 12 of the 16 seats on offer. In 1977 when Shanta Kumar -who also hails from Kangra- became Chief Minister of the then Janata Party, the party returned with it’s best ever performance, in the aftermath of emergency, of 53 seats in the 68 member assembly with Kangra contributing almost 20% of the seats won (13).

BJP again tasted victory under Shanta’s leadership in 1990 when Kangra district was again the main contributor with 13 seats. However the importance of Kangra seems to have been lost on the BJP in 2012 when the Shanta-Dhumal feud culminated in disaster for the BJP in Kangra and Himachal.

The party seemed to be repeating it’s mistakes  of 2012 in key constituencies of Dharamshala & Palampur – which is the hometown of Shanta Kumar- when Shanta protege’s and local leaders Kishan Kapoor & Parveen Sharma were denied tickets in preference to outsiders leading to a lot of discontent and resentment amongst the local party rank & file. It took large demonstrations & a show of strength by the local leaders for the High Command to reallocate  the ticket to the local Gaddi leader Kishan Kapoor in Dharamshala. However, Shanta Kumar could not secure a ticket for his favourite Parveen Sharma inspite of Union Minister J P Nadda air dashing to Kangra to meet the party veteran, highlighting the many forces at play within the BJP.

The Congress is also facing it’s share of problems in Kangra with former minister & Virbhadra’s vociferous​ opponent within the party, Vijay Singh Mankotia deciding to contest as an independent from Shahpur assembly segment in Kangra district. Mankotia has been demanding Virbhadra’s resignation and has also sought his dismissal  from the High Command in the wake of corruption cases & the Gudiya rape & murder case that drew a lot of ire from the public.

Since 1985 onwards Kangra has been voting against the incumbent government and this trend has continued till the last election in 2012. By that count the BJP could return with a rich harvest from Kangra and return to power in the State, but Virbhadra and his team will try everything in their kitty to buck that trend.