Priya Saha, a Bangladeshi Hindu woman, is being threatened with sedition charges after she recently told US President Donald Trump in Washington DC that minority communities in her country were being persecuted.

Saha, organising secretary of the Bangladesh Hindu Buddhist Christian Unity Council (HBCUC), had attended a meeting at the White House on July 17 and reportedly told President Trump that “37 million people of the minority groups have disappeared from Bangladesh”.

Saha also told Trump that there are still “18 million minority people” in Bangladesh and asked for his help as “we (minorities) don’t want to leave our country, just help us stay. I’ve lost my home, they’ve burned my home, they (have) taken away my land, but no judgement (has) yet taken place.”.

When Trump asked her who took the land and home, she said that “Muslim fundamentalist groups (and) always they’re getting the political shelter, always”.

The Bangladesh government condemned her statement for damaging the image of the country with the ‘fictitious and unfounded’ allegations of repression. So immense was the outrage in Bangladesh that the HBCUC quickly distanced itself from Saha’s comments and on Monday expelled her.

Priya Saha had participated in the Second Ministerial to Advance Religious Freedom held at the US Department of State in Washington, DC on July 16-18. Delegates from 106 countries, including about 40 Foreign Ministers, attended the meeting at the invitation of Mike Pompeo, the US Secretary of State.

Her brief meeting with President Trump took place as part of a delegation of 24 victims of religious persecution. Interestingly, 11 of these were persecuted Christians (mostly foreign-funded evangelists involved in proselytizing Christianity in communist/authoritarian countries), 6 Muslims (including a Ahmadiyya man from Pakistan), 2 Jews, 1 Tibetan Buddhist, 1 Yazidi,  1 Hindu (Saha) and 1 Falun Gong and 1 Cao Dai practitioners. There was no representation for persecuted Pakistani Hindus, or Hindus from Malaysia.

The Christian evangelical bias is no surprise given that the event is linked to the US State department’s controversial body USCIRF (United States Commission for International Religious Freedom).

The entire outrage against her, led by Bangladesh Government ministers like Road Transport Minister Obaidul Quader who called her remarks “false, purposeful and treasonous”, seems centred around validity of the 37 million number quoted by her.

In a video posted by her rights organisation SHAREE on Sunday, Priya Saha explained her remarks and based her claim on a study by Dhaka University teacher Abul Barkat.

“The Hindus now account for 9.7 percent of the total population, compared to 29.7 percent during the 1947 Partition. That means the number of minority people has gradually declined. I didn’t mean to comment on the government. I just mentioned what happened in my village in Pirojpur – there were 40 families in my village in 2004. That number is now 13,” she explained.

Prof. Abul Barkat had said in his book published in 2016 that, “From 1964 to 2013, around 11.3 million Hindus left Bangladesh due to religious persecution and discrimination. It means on an average 632 Hindus left the country each day and 230,612 annually.”

Prof. Barkat has now come out with a public statement that Priya Saha had ‘distorted’ his research findings and asked her to withdraw her remarks.

So is Priya Saha really off the mark with her comment that 37 million minorities have disappeared from Bangladesh? It must be noted that being a member of the minority coalition group HBCUC, Saha spoke on behalf of all persecuted minorities of Bangladesh, but the hard fact is that it is Hindus who are the overwhelming victims of religious cleansing from Muslim-majority Bangladesh. 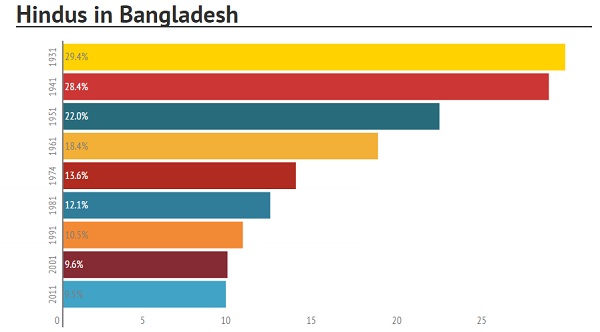 It is clear that before liberation from Pakistan in 1971, Hindus of Bangladesh (then East Pakistan) were being persecuted at an unprecedented rate. It is a shocking indictment of successive Congress Governments in Bharat that they failed to raise this issue internationally and only intervened in 1971 when things got completely out of hand and the genocidal Pakistani Army launched Operation Searchlight, architected by Pakistani General Tikka Khan who reportedly claimed that he would kill four million men in 48 hours and thus have a ‘final solution’ to the Bengal problem.

As this research paper shows, even the holocaust of Jews carried out by Hitler’s Nazi Germany (where 6 million Jews were murdered over 6 years of WW2) paled in front of the scale and terror of Operation Searchlight  –

It is safe to assume that the overwhelming majority of these 10 million refugees were Hindu as they were the population that was attacked enmasse while the Pakistani Army’s campaign against secular Bengali Muslims was more targeted.

Quite clearly, Prof. Barkat’s research does not include this 10 million Hindus who fled from East Pakistan in just one 9-month period in 1971, as his research only covers the forced gradual migration of Hindus due to day-day routine persecution over a 49 year period (1964-2013). Moreover, going by his own research that daily rate of Hindu migration was 705 before the Liberation War, we can calculate that an additional 4.4 million Hindus were forced out from East Pakistan (Bangladesh) in the 17 year period from 1947-64.

So now we have 11.3 + 10 + 4.4 = 25.7 million Hindus who have been forced to flee from Bangladesh (both before and after its formation) in the post-1947 period. Add the mass exodus of Hindus which would have taken place right at the time of partition, and the number who would have converted to Islam over the years to escape the relentless persecution, and the 37 million number quoted by Priya Saha starts making sense.

While distancing the HBCUC from Saha’s comments, HBCUC spokesperson Kajal Debnath did admit “it could be near to truth if the figure is counted from the 1947 partition of the country. Yet, the word – disappeared – that she chose, is also incorrect as the population were rather ‘forced to leave the country’ (mostly to migrate to India),” Debnath said.

Priya Saha and the HBCUC have both stated that compared to the previous governments of Bangladesh, the incumbent one of Prime Minister Sheikh Hasina was “much more minority-friendly, and we (minorities) want to live here amid harmony”. Saha said the religious minorities had faced extreme brutality when the Bangladesh Nationalist Party (BNP) won in the 2001 elections but the rate “dropped greatly” during the Awami League government.

While it is true that PM Sheikh Hasina has shown courage in taking on the Islamists and has prosecuted several high-profile jihadi war criminals who sided with Pakistan during the 1971 Liberation War, persecution & casual discrimination against Hindus continues unabated with  many elements of her ‘secular’ Awami League party involved as well.

While Priya Saha is facing a huge public backlash from the ‘secular’ Awami League government for a mere 40-second comment about the very real persecution of Bangladeshi minorities by fundamentalist Muslims, contrast this with the kid gloves used by the Bharatiya state to treat bigoted anti-Bharat activists like John Dayal, Cedric Prakash, Kancha Ilaiah etc. who routinely testify at length to US & other Western Government commissions and think tanks, demonizing Bharat and calling for Western intervention in Bharat by raising the ‘Christian persecution’ bogey.

Even the ‘nationalist’/’hardline’ Government of Narendra Modi has not been able to act against these elements, so still occupy a prominent position in the national discourse and openly spew their diatribe against Bharat.