Assam will be made free from illegal immigrants: Shah 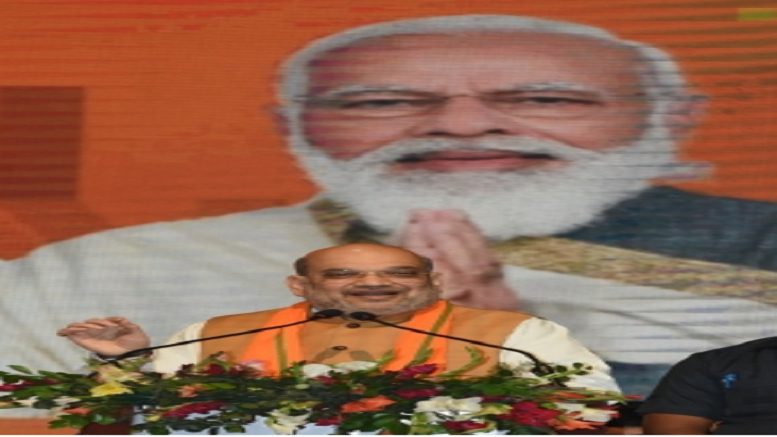 Union Home Minister Amit Shah on Friday asserted that Assam would be made free from illegal immigration and floods, adding that the government has already been successful in eliminating terrorism and agitation from the state.

Addressing four election rallies at Kamalpur and Jagiroad in central Assam and Patharkandi and Silchar in southern Assam, Shah said that with the surrender of over 2,000 extremists of various outfits the state under the BJP rule curbed reign of terrorism even as the armed militants were performing naked dance during Congress rule.

“To control the flood in Assam, appropriate plans and projects would be undertaken after a satellite survey. Then Assam would be a flood free state,” he told the gatherings.

He said that the Congress and AIUDF (All India United Democratic Front) alliance would only patronise illegal migrations, terrorism and agitations. The former BJP national President claimed that the Congress is trying to project AIUDF chief as Assam’s identity.

Shah said Assam’s identity is Mahapurush Srimanta Sankardeva, Bharat Ratna Bhupen Hazarika and Lachit Borphukan and not Ajmal, who he termed as “Kalapahar”.

Borphukan had in 1671 led the Ahoms in the Battle of Saraighat, considered the greatest naval battle on a river, to victory over the Mughals. He died in April 1672, almost two centuries before the Indian freedom movement had begun.

Shah announced that after the elections, the new BJP government would increase the daily wages of tea garden workers to Rs 350 and promised to set up hospital, schools and colleges in each tea garden areas.

“Already Rs 1,000 has been allocated in the central budget for the welfare of the tea garden workers.” Increase of the daily wages of 10 lakh tea garden workers in Assam is the key issue in the run up to the BJP ruled state.

Amid huge applause, Shah said that for the official and other administrative purposes people of Barak Valley need not go to Guwahati or Dispur after travelling several hundred kilometres as a Mini Secretariat is being set up in the region. Over four million populations, mostly Bengali speaking, reside in the three districts of Barak Valley region in Southern Assam – Cachar, Karimganj and Hailakandi.

Explaining various mega developmental projects implemented and under implementation in Assam, the Union Home Minister said that the Congress during its rule backed the poachers who killed hundreds of Assam’s pride rhino but there is no incidents of poaching of rhino after BJP came to power and the poachers either in jail or in hiding.

He also said that a Special Economic Zone is being set up in Guwahati and it would greatly boost the economy of the state. Shah along with many central BJP leaders including Prime Minister Narendra Modi and Union Ministers during the past more than one month have undertaken massive campaign for the BJP which in alliance with its old ally Asom Gana Parishad (AGP) and new partner United People’s Party Liberal (UPPL) contesting against 10-party ‘Mahajot’ (grand alliance) led by Congress.