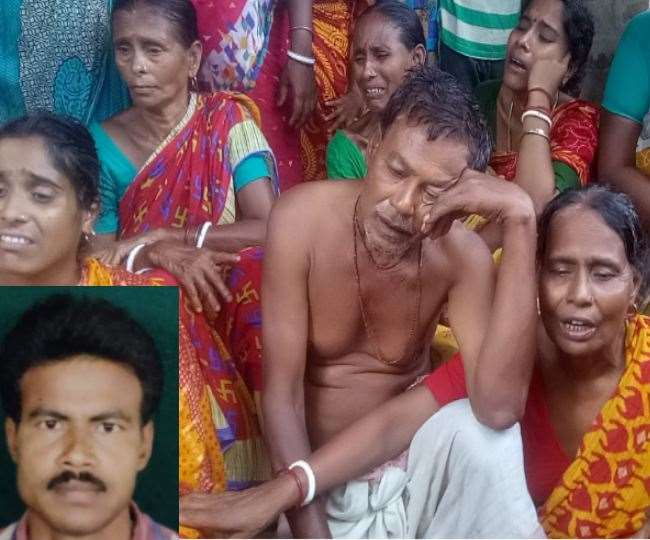 Yet another BJP worker in West Bengal has been murdered last week, this time in Krishnanagar, Nadia district of the state. To protest the heinous crime, the BJP called for a 12-hours strike on Friday, July 17th.  The deceased victim, 38-year-old Bapi Ghosh was a BJP Yuva Morcha activist. The murder took place in Galkata village that falls under the jurisdiction of Bhimpur police station.

According to sources, Bapi Ghosh was attacked by TMC goons on the evening of Tuesday, July 14th, and was fatally injured after being hit with bamboos and iron rods in the head. He was immediately rushed to Krishnanagar District Hospital but was referred to be taken to NRS hospital in Kolkata by the doctors after his condition started to deteriorate. The next afternoon, Bapi succumbed to his injuries while still being under treatment in NRS.

This has led to a massive uproar among the party workers and fuming BJP members blocked the Krisnanagar road on Thursday. Local police arrived soon and cleared the blockage. The state police functioning under Mamata Banerjee states that the attack and death resulted from personal enmity. The BJP, who has lost the second member in a planned attack in one week, however, claims that the TMC cadres have a hand in this death. Family members of the murdered BJP worker also allege that the attack was instigated by the Trinamool Congress.

Bapi Ghosh’s father Nimai Ghosh said that his son, who was earlier a TMC worker, had recently joined the BJP. This provoked the people of the ruling party to kill him.  The police have so far arrested two people, named Khairul and Babar Alido, in connection to the attack and murder.

Nimai Ghosh’s claims bore similarity between the death of Bapi Ghosh and murdered BJP MLA Debendra Nath Roy whose dead body was recovered from in front of a shuttered shop in the local marketplace of Baliamore, Raigunj. He had been a member of the Communist Party of India for years and had joined the BJP in 2019.

While police dismissed Roy’s death as a case of suicide, after fishing out a ‘suicide note’ from his pocket, the wife of the MLA calls it a political murder and has demanded an independent inquiry by the CBI. She asserts that the state police will not carry out proper investigation.

There have been unconfirmed reports of a bomb attack on BJP workers in Shyamnagar, North 24 Parganas district –

The official party handle has also just shared disturbing news of a 16-year-old girl, the sister of a BJP booth president, being raped by one Feroze Ali in Chopra, Uttar Dinajpur district. The victim reportedly passed away today morning.

A 16 years old girl raped by Feroze Ali in Chopra. She died today morning. Did she pay the price of being the sister of the local BJP Booth President? And sadly, a state governed by a woman CM cannot protect it's girls. pic.twitter.com/Fw7Fp4v6hJ

With only 10 months remaining for the state to go into elections, political murders in the locked-down state, which is already reeling from the Covid-19 pandemic and cyclone Amphan damage, are on the rise. West Bengal has a long history of political murders; it had started with the CPI(M) taking charge of the state from the Congress some four decades ago and is worsening in the current regimen.

Hundreds have died and many more have been injured in every election in the sate – national, state or local – since 2011. With rising public anger against the Mamata Banerjee govt., the 2021 state election promises to be the bloodiest ever as a desperate regime will try its best to cling on to power. Only President’s Rule provides any hope for normal elections in West Bengal in the current scenario.