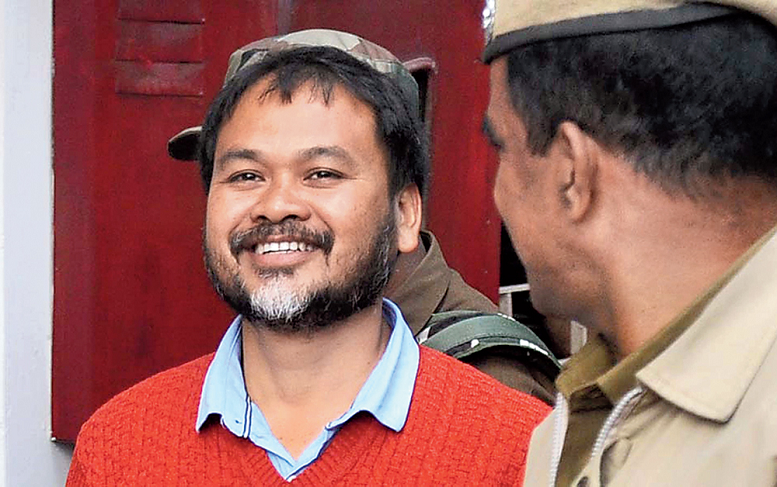 On July 1, 2021, a special National Investigation Agency (NIA) Court had absolved Assam’s “peasant activist” Akhil Gogoi of all the charges under the Unlawful Activities Prevention Act (UAPA). Akhil Gogoi was arrested on December 12, 2019, from Jorhat during the height of the violent protests against the CAA. He and his associates (Dharjya Konwar, Manas Konwar, and Bitu Sonowal) were also accused of sedition.

During an anti-CAA rally at Panitola in Assam’s Tinsukia district, Akhil Gogoi had said that if the Centre passes the Citizenship Amendment Bill (CAB), Assam has every right to secede from Bharat . Shortly after the Court’s decision on Thursday, Mr. Gogoi was quick to hit out at the ruling BJP, saying that the political and social atmosphere in the country, and Assam in particular, was no longer democratic. No wonder, Akhil Gogoi has always been the most loved and adored pet of the anti-CAA cabal in Assam.

“Social Activist” Medha Patkar had campaigned for Akhil Gogoi at an election rally held in Sivasagar district and later addressed a press conference at the Krishak Mukti Sangram Samiti (KMSS) headquarters situated in Guwahati. The royal capital of the mighty and indefatigable Ahom dynasty of Assam, Sivasagar was the birthplace of the separatist organisation ULFA.

It is considered to be one of the most prestigious of all the 126 constituencies in the state due to its over three centuries-old legacy of Ahom rule. Both the Congress and the Left parties have always had a viable presence in Sivasagar. While directing her attacks at PM Modi, Medha Patkar glorified Akhil Gogoi as an Andolanjibi Jana Pratinidhi who, she said, must be elected in order to raise the issues of the poor and the downtrodden in the Assam Legislative Assembly.

There is a vast difference between street protests and demonstrations in a democracy versus the electoral battlefield. While the paid media channels massively covered the anti-CAA demonstrations in Assam towards the fag end of 2019 and the beginning of 2020, what they deliberately did not publicise was the pro-CAA sentiment that existed and still exists among a significant and quite sizeable chunk of the population in Assam.

Once while discussing about the pros and cons of the CAA with a relative who stays in a largely Muslim-dominated district of Assam, his stance was clearly in favour of the legislation. It is this section of the people whose voices went unheard and unnoticed during the protests, the ugly repercussions of which later came to be magnified at the circus of Shaheen Bagh in Delhi. These are the people who have borne the brunt of Islamic demographic expansionism in Assam over the past several decades.

Another important point which was largely missed by the anti-CAA bogey is that the protests were largely confined to the big towns and cities, led by the upper middle class/middle class educated youth misguided by an elite intelligentsia.

After the removal of Article 370 from Jammu and Kashmir in 2019, Akhil Gogoi had organised a press conference where he openly said that the KMSS would continue its protest against this decision of the Central Government. In the year 2016, during an eviction drive that was carried out by the district administration against illegal settlers of suspicious nationality in the area around the Kaziranga National Park, Akhil Gogoi vocally lodged his protest against it.

He owns the sprawling Kaziranga Orchid and Biodiversity Park which has now turned into a must-visit spot for tourists. It was served an eviction notice from the Bokakhat District Authorities in July, 2018 on the ground that the Park has encroached 6.1 bighas of Government land in addition to the 22 bighas allotted to them by the Government of Assam.

Former CM of Assam Shri. Tarun Gogoi had quite often reiterated that Akhil Gogoi has secret associations with several Maoist training groups. In the late 1990s, he had joined the CPI (ML)-affiliated United Revolutionary Movement Council of Assam led by Maoist leader Santosh Rana. But, they later parted ways and Gogoi became the editor of an independent Marxist journal published in Assamese.

The KMSS led by Akhil Gogoi has been quite vocal about the eviction drives carried out by the Government of Assam at different places of the state against illegal encroachers. But, at the same time, they have maintained absolute silence on the issue of encroachment of the lands of our Sattras and Namghars (the Sattra is a Vaishnavite monastery and the Namghar a religious prayer hall of the Assamese Hindus) at Batadraba, Barpeta, and Dhubri districts. The Sattras and the Namghars represent the civilisational pride of the Hindu society of Assam.

A newspaper report published way back on September 17, 2010 in The Deccan Herald reported that more than 7,000 bighas of land belonging to 39 Sattras of Assam in Dhubri, Barpeta, Nagaon, and Morigaon districts are in the grip of illegal encroachers. The Brahma Committee Report had clearly mentioned that the identity of as many as 18 Sattras in Assam is under threat, following large-scale encroachment by illegal Bangladeshi migrants.

Interestingly, the “activist” in Akhil Gogoi has never uttered a single word against this vast demographic change that the religious institutions of Assam have seen over the years. It is now becoming an existential threat for the identity, culture and civilisation of Assam.

Akhil Gogoi always kept on writing open letters addressed to the common public of Assam during his stint in the jail. But, what prevented him from condemning the gruesome murder of a poor Hindu vegetable seller Sanatan Deka by a Muslim mob at Assam’s Hajo in May, 2020, or the killing of Rituparna Pegu in Guwahati in broad daylight again by a group of Muslim men, and even the theft that took place at Barpeta’s Ganakkucchi Sattra by a Muslim man, are questions that seek an honest answer.

Just before the first phase of the Assam Legislative Assembly Elections of 2021, Akhil Gogoi had written an open letter appealing to the people of Assam to oust the ruling BJP from power. He also urged the voters to exercise their franchise in support of the candidates fielded by regional and communist parties in general so as to oust the BJP.

Again, in case of those constituencies where both regional and communist parties did not field candidates or where the candidates of such parties had little support base, Akhil Gogoi asked the voters to cast their votes in favour of the candidate of any opposition party who could defeat the BJP candidate.

Labelling the BJP as a “communal fascist political outfit”, Gogoi has been continuously referring to the imposition of the CAA, recommencement of the Lower Subansiri Hydroelectric Project work, and the setting up of toll gates at national highways, etc. as some of the “misdeeds” committed by the BJP regime in Assam. As it was observed by Gogoi in the letter, “It is time to defeat the BJP at any cost in the interest of saving Assam and its people.”

It was after the withdrawal of his candidature from Mariani that Akhil Gogoi decided to contest only from the Sivasagar seat. He pleaded the voters of Sivasagar to support his cause in order to strengthen democracy and resist the “communal-fascist” agenda of the BJP. Akhil Gogoi eventually won as an Independent candidate from Sivasagar.

On May 21, 2020, the Government of Assam brought Akhil Gogoi in a bus from the jail with adequate security arrangements for the oath-taking ceremony at the Assam Sachivalaya Sadan, Dispur. After stepping down from the bus into the Assam Sachivalaya Sadan, Mr. Gogoi started complaining that as an MLA, he was “mistreated” while he was being brought in the bus. He also said that it was an insult to the entire Assamese community to bring an MLA in a bus.

But, till then, Akhil Gogoi was a detainee under the UAPA and did not take oath as an MLA. The NIA chargesheet had earlier revealed a conspiracy plotted by Akhil Gogoi to stoke violence between the Assamese and the Hindu Bengalis during the anti-CAA protests at Chabua, in Dibrugarh district of Upper Assam.

On the day of voting in Sivasagar on March 27, Akhil Gogoi’s mother Priyada Gogoi took blessings at the famous Shiva-Doul in Sivasagar, almost begging the people to cast their votes for her son. But, during his oath-taking ceremony at the Assam Legislative Assembly on May 21, 2021, Akhil Gogoi did not swear by the name of Ishwar. This can be justified on the ground of Freedom of Religion guaranteed to all citizens of the country by the Constitution.

But, what needs to be acknowledged is that the beauty of Bharat’s democracy and its political system rests on the fact that even those citizens of the country who have to face jail terms, can contest elections and come out as winners. He promised to fulfil his duties as a legislator, respecting the Constitutional principles.

Akhil Gogoi was admitted to the Gauhati Medical College and Hospital (GMCH) last year for various ailments. He walked out of the hospital fit and fine hours after the NIA Court sent the release order to the Guwahati Central Jail.

-by Dr. Ankita Dutta (The author holds a PhD in Political Science and regularly writes on topics of national and current interest).