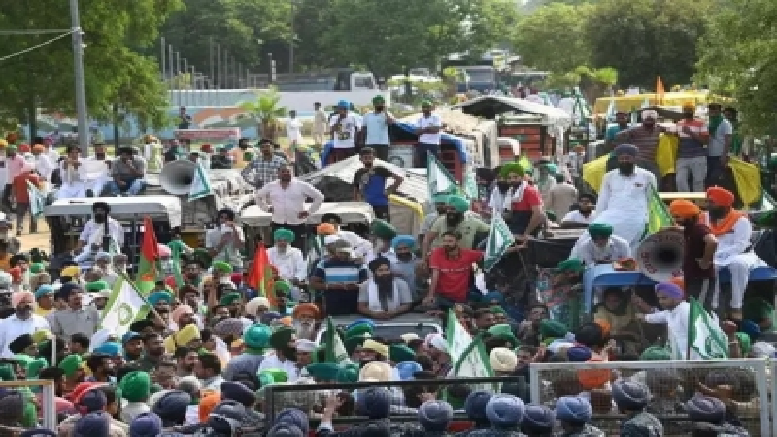 The two-month-old AAP government in Punjab is facing the wrath of the state’s farmers who have arrived in large numbers at the border of the Union Territory of Chandigarh and threatened to storm the state capital today if their demands are not met.

Led by Sanyukt Kisan Morcha comprising 22 organisations, hundreds of farmers have broken past the first barricade of the Punjab police at Mohali and are squatting near the second barricade.

They have demanded that a meeting be arranged with Punjab Chief Minister Bhagwant Mann on the list of their demands sent to the AAP government earlier.

A spokesman of the Chandigarh police has told the farmers that they would not be allowed to enter the UT at any cost. If need be reinforcements from BSF and CRPF would be deployed.

On the other hand, farmers are adamant to break all barricades to enter Chandigarh and gherao the Punjab CM’s residence.

The farmers are demanding a bonus of Rs 500 per quintal of procured wheat as the heatwave had damaged the crop resulting in a loss of yield. The farmers are also opposing the government’s diktat to sow paddy in a staggered manner starting from June 18 and ending on June 24. Punjab has been divided into four zones for sowing paddy in order to ease pressure on electricity supply and conserve groundwater. But the farmers want the sowing season to start from June 10.

Another demand relates to the lowering of charges on the extension of electricity load from Rs 4,800 to Rs 1,200. The release of pending payment of sugarcane bought by sugar mills is yet another issue. The protesters are also demanding to scrap the smart electricity meter scheme. They also want the government to immediately announce a minimum support price (MSP) for moong, maize, and basmati rice.

The farmers have arrived with rations, beds, fans, coolers, utensils, LPG cylinders, and refrigerators and say they are prepared to stay put for three months and even more if their demands are not met.

Jagjit Singh Dallewal, state president of BKU declared that they would talk only to the Chief Minister and not to any deputed officers. He threatened to replicate the Singhu border scenario when farmers sat on a dharna on the border of Delhi for over a year to get the three controversial farm laws repealed by the Centre.

Reacting to the protest Punjab CM Bhagwant Mann said that the protest was “unwarranted and undesirable.” Hollow sloganeering cannot stop the government’s resolve to save underground water and electricity, the CM reiterated.

AAP spokesman Malwinder Singh Kang said that the doors of the government were always open for talks with the farmers but they should be reasonable in their demands.