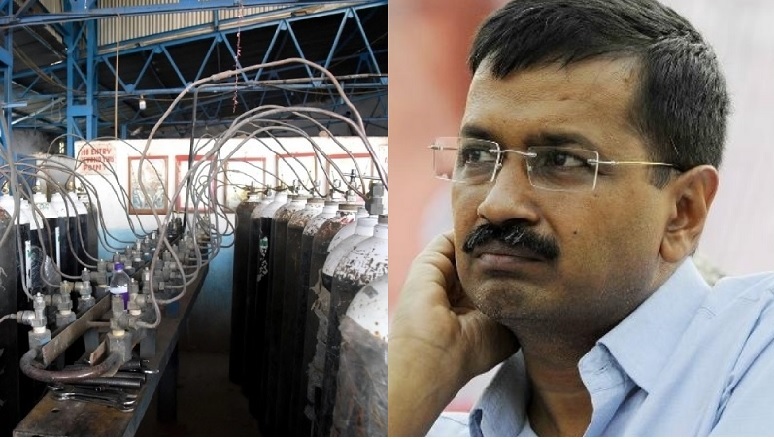 Even as entire Bharat struggles due to a deadly second wave of the Covid-19 pandemic, the Arvind Kejriwal Delhi Government was heard crying loudly in media and courts about a ‘lack of Oxygen supply’ to Delhi. It took just the mention from the central government of an Oxygen audit in Delhi for this cacophony to stop.

From a requirement of 970 MT to 582 MT in flat 72 hours , parts of Delhi must have stopped breathing on hearing about the oxygen audit . https://t.co/Um8SkHl1Ft

Does this mean the earlier demand was inflated?

This U-turn in Delhi government’s position follows the Centre’s insistence in the Supreme Court for an audit of Oxygen utilisation in Delhi as experts were of the firm view that the state could manage the situation with proper distribution and utilisation as Mumbai has been doing.

Right from the moment the second wave started peaking, the demand for O2 shot up across the country and it soon became apparent that more than availability of medical oxygen, it was the logistics of transporting the oxygen from states that had surplus supply and transporting within states via tankers and cylinders that was the bigger problem. However, while the centre and other states started tackling the problem, Delhi government took to TV and social media with their usual accusations of step-motherly treatment by the centre. Delhi hospitals started filing separate petitions in court for oxygen shortage, reportedly as per directions of the AAP govt.

The Centre had its calculations and oxygen was being rationed to each state as per priority. Left unchecked, the AAP started demanding additional oxygen from the central quota. They were meanwhile doing nothing on the grassroots level to transport and deliver the oxygen locally.

While most states were demanding around 2-3 MT of oxygen per 1000 active cases, Delhi’s demand was for more than 7 MT per 1000 active cases. The Centre was juggling the scarce resources and started supplying more than the average quota of oxygen to Delhi. By late April it became apparent that it was not oxygen that the AAP was after when they approached the Delhi HC asking for 700 MT for Delhi (by 29 April their demand had actually jumped to 976 MT). Why the court even allowed a hearing without checking the data is surprising, but it was their remarks during the hearing that were even more unusual.

On 4 May, they issued a show-cause notice to the Centre over “non-compliance” of its order to provide 700 metric tonnes (MT) of medical oxygen to Delhi. The HC asked Piyush Goyal and Sumita Dawra, additional secretaries in the ministries of home affairs and industrial promotion, respectively, to appear before it on the 5th of May to answer the notice.

These bureaucrats had to drop everything else and appear before the court that was interested only in a supposed shortage in the Delhi oxygen supply. As if for added effect, the court said that “You can put your head in sand like ostrich, we will not.” They even wanted the Centre to reroute oxygen from Maharashtra! For added mileage, the court added ‘contempt of court’ proceedings and even warned the officials of ‘jail time’!

The left-liberal media chose to pick up such observations selectively and amplified the same indicating that the Centre was trying to hold back oxygen only for Delhi.

Eventually, by 28 April, even the Delhi HC could not overlook the chronic mismanagement by the Kejriwal government and slammed it for just distributing ‘lollipops’. The HC warned that if the Delhi administration is unable to address issues related to distribution of liquid oxygen and oxygen cylinders, it will ask central government officers to take over.

It is interesting to note here that it is the same High Court that has now given AAP cabinet minister and MLA Imran Hussain a clean chit in an oxygen cylinder hoarding case after ‘verification of documents’. Intriguingly, the plea against Hussain was dismissed even after he admitted in court that he had brought 10 cylinders on rent from a seller in Delhi and procured the medical oxygen from Faridabad, Haryana.

Aren’t patients and hospitals in Delhi struggling to obtain cylinders, and isn’t Faridabad part of NCR (National Capital Region) where the oxygen situation is also quite bad? How is it legal for someone to take 10 cylinders on rent, when such cylinders should only be given out for critical patients with a medical prescription? There is a finite number of cylinders in Delhi and elsewhere, so if someone ‘rents’ 10 of them, it decreases the supply for everyone else.

Even assuming Hussain wants to do ‘charity’ and help his constituents, doesn’t it skew the supply of a critical resource when patients have to depend on favors from a politician instead of fulfilling their need from authorized vendors? If Hussain really wants to do charity, he should just reimburse medical bills of needy Covid-19 patients.

The Centre meanwhile approached the Supreme Court and a bench met on the 5th of May. Left unchecked Delhi’s 700 MT demand had jumped to 976 MT by April end. The actual supply went up from 300 MT to 433 MT and by May 5th to 730 MT!

During the Supreme Court hearing, the city of Mumbai was compared which showed that at the peak, when the caseload in Mumbai hospitals was 92000, the oxygen consumption was 275 MT. BMC (Mumbai Municipal Corporation) officials took some strategic steps to manage the Oxygen situation, which can provide a template for the rest of the country to follow.

However, most of those steps were simply ignored in Delhi, which didn’t even care to ensure proper utilization of PM-CARES funds allotted to it. To date, Delhi hasn’t fixed a PMF or per minute flow level. In Mumbai the BMC Commissioner Iqbal Singh Chahal was taking decisions while in Delhi, it just wasn’t clear who was in charge – Kejriwal, his deputy Sisodia and AAP spokesperson Raghav Chadha were mostly busy on TV channels or on social media. Kejriwal even leaked the live stream of a closed virtual meeting between PM and all CMs on the Covid-19 crisis, to play politics.

Can 900 MT be stored and distributed daily? Delhi hospitals’ storage capacity is 478 MT. This put the AAP regime in a conundrum. They were not able to store the excess oxygen that was coming in. On Wednesday, 140 MT of oxygen arrived in the capital in seven large containers. It’s off-loading became an issue as there was no capacity since the storage was full.

The Supreme Court flung out the contempt of court proceedings initiated by Delhi High Court. But honestly, this just seems like a good cop-bad cop routine being played by courts to pander to AAP’s whims. The SC was still pushing the Centre to give a plan to supply 700 MT to Delhi. Now, that Sisodia has himself admitted that 582 MT is enough for Delhi and they are willing to ‘give surplus oxygen to other states’, will the courts pull up the AAP government for creating such a hysteria over past few weeks? What about the countless hours wasted by so many bureaucrats and others in reporting to courts?

On 6 May, Delhi government opposed the Centre’s plea for auditing oxygen utilisation in the Capital and instead demanded the SC to order an audit of what it said was the Centre’s ‘arbitrary allocation of oxygen and mismanagement of transportation to Delhi and other states’. “There should be no oxygen audit in Delhi at this juncture as that will divert the attention of medical professionals and hospitals from treatment of Covid patients,” Delhi counsel Rahul Mehra said, adding the centre was carrying out a ‘witch-hunt’ against Delhi. SC rushed to assure that it would not allow courts to be used a platform for a witch-hunt against the Delhi govt!

Amidst all this grandstanding, let’s listen to what the man lauded by SC and others for the ‘Mumbai model’ of efficient Oxygen management, BMC Commissioner Iqbal Singh Chahal, had to say when questioned “What do you think of Centre’s oxygen allocation?”

Now that their bluff has been called on Oxygen, the AAP government has moved on to another topic for their usual blame-games and spit-and-scoot politics: vaccination!