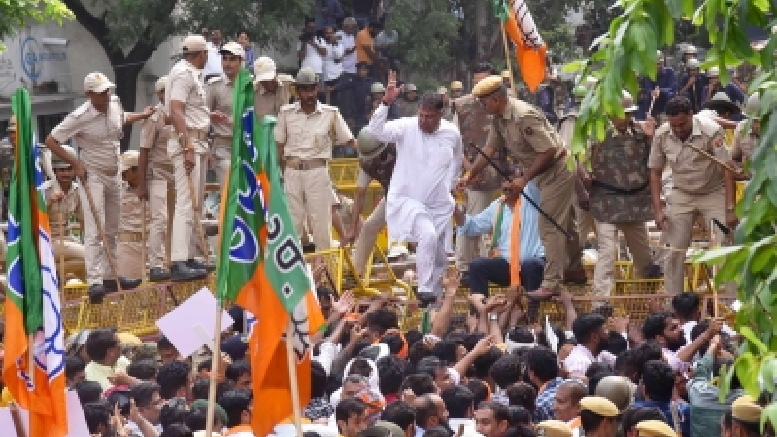 BJP, on the call of its state president Satish Poonia, on Tuesday staged a huge protest against the Congress government in Jaipur alleging that it was turning a blind eye over the 55,000 cattle deaths in the state due to Lumpy virus.

Hundreds of party workers, led by Poonia, marched from the BJP office to the Assembly, but were stopped by the police on Sahakar Marg. Here the leaders and workers raised slogans against the government and were detained.

Addressing the gathering at the party office this morning, Satish Poonia said that “Shraddha Paksha was going on right now. In 2023, the Congress party will see its permanent Shraddh rituals. The Congress government will be wiped out from India and Rajasthan,” he said.

The party workers, who were going to besiege the Assembly clashed with the police. The workers also broke the police barricade on the Sahakar Marg in Jaipur. Poonia, who climbed the barricade, was pushed by the policemen. A heavy police force was deployed to stop the activists from moving forward.

Jaipur Police detained the office-bearers, party workers, MPs and MLAs, including BJP Poonia ji and took them to Bani Park police station, confirmed BJP media cell at the time of filing of report.