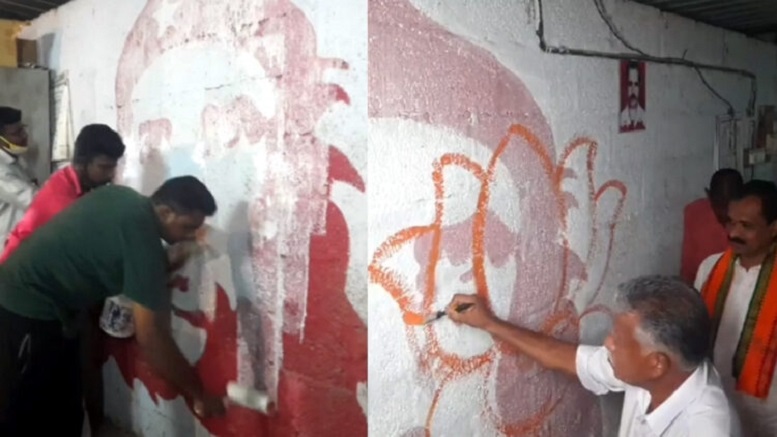 In a major embarrassment to the ruling regime, 98 office bearers of the Communist Party of India (Marxist) (CPM) resigned from the party and have joined hands with the BJP at Kovalam near Thiruvananthapuram. The newly added members were seen erasing a drawing of Che Guevera from the Mullur party office walls and want the space to be converted into a BJP office. As the Saffron surge continues unabated across the length and breadth of Bharat, unconquered bastions like Kerala too are feeling the effect.

The newly inducted members were welcomed into the BJP by Union Minister of Parliamentary Affairs, Coal and Mines, Prahlad Joshi in the presence of the Union Minister of State for External Affairs & Parliamentary Affairs, V Muraleedharan. Mukkala Prabhakaran, the Gram Panchayat member, and former CPM Area Committee member led the new entrees who were given BJP memberships in the presence of BJP Thiruvananthapuram District President, VV Rajesh.

Reminiscent of mass defections from the CPM to the BJP in states like West Bengal and Tripura, well-educated and successful citizens are joining the party. A recent inductee Metroman E Sreedharan has given an enormous impetus to the party. The other star campaigners and joiners include former Kerala DGP Jacob Thomas and former Kerala DIG TP Senkumar.

Madhavan Nair, the ex ISRO chief is another member who recently took BJP membership. Even Ashokan, the ex-serviceman father of Hadiya who had controversially converted to Islam and married a Muslim PFI cadre against her family’s wishes, has switched sides and joined the BJP from the CPM. The list is seemingly endless.

The booth committee members to the highest officers who have joined have one thing to say: The CPM betrayed the people of Kerala. They have all echoed the same feeling in one way or the other.

BJP top leaders including JP Nadda and UP CM Yogi Adityanath have reached the state recently to participate in a state-wide campaign by BJP Kerala President K Surendran. His Vijay Yatra is moving from district to district and has marked the party’s plunge into the local assembly elections offensive. Amit Shah is also expected to come down next week to bolster the party’s chances in the state.

For the party, any result would be a good result. With just one seat towards its name in the 140 member assembly, the BJP hopes to increase its chances considerably. Given the support and response it is receiving from the public, things look set to turn for the good of the people. With hugely popular path-breakers under its wings, K Surendran recently predicted around 40 seats this time around.

Even though BJP got no seats in the Lok Sabha election of 2019, it did have a 15% vote share. In a recently concluded local body elections conducted towards the end of last year, the left ruling party got 7200 odd seats and the congress and its allies 5800. Though the BJP had to contend with around 1200 seats, it appeared to be a sea change when compared to earlier results, and has invigorated the party workers beyond compare.

This is not the first time that disgusted party members are quitting both the CPM and Congress to join hands with the BJP. As early as 2014, 240 CPM members from Thycaud near Thiruvananthapuram joined the BJP. In September last year, the CPM Kovalam local committee office members and others from nearby Venganoor panchayat decided to come into the BJP.

In the four months prior to December 2018, 18600 CPI and CPM members from 11 different districts joined hands with the BJP.

AP Abdullakutty, an ex-MLA and ex-MP from Kannur is the BJP vice president and a huge fan of Narendra Modi. He has worked with both Congress and the CPM before quitting to join the BJP. Hopefully, he will educate Kerala’s Muslim society about the pitfalls of supremacist beliefs that mainstream Muslim religious organisations ingrain, and help ordinary Muslims act in enlightened self-interest.