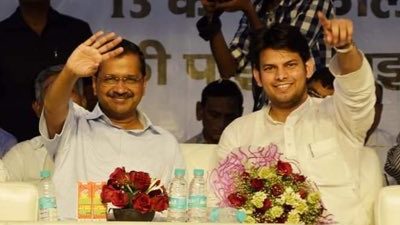 Controversial AAP MLA Prakash Jarwal and his aide, Kapil Nagar, have been sent to four days police remand in connection with abetting a doctor’s suicide.

Dr Rajinder Singh (52) committed suicide by hanging himself on April 18. A suicide note retrieved from his house accused AAP MLA Prakash Jarwal and Kapil Nagar for harassment which pushed the doctor to suicide.

Along with running a clinic in Durga Vihar, Dr. Singh used to lease out water tankers to Delhi Jal Board since 2007. As per the FIR lodged by the doctor’s son, MLA Jarwal and his aide had been constantly threatening his father to pay a hefty bribe else they would terminate his contract. Jarwal eventually forced DJB to withhold outstanding payment in the tunes of a few lakhs, due to which the doctor suffered a financial loss and committed suicide.

Delhi Police had sought ten days remand for them stating the investigation is at a preliminary stage and recoveries are to be made from both the accused persons. Police believe there is a nexus between accused Prakash Jarwal and tanker mafia who are operating the tankers in the area of Deoli and Sangam Vihar. They further averred that the extortion money received by both the accused persons is yet to be recovered from them and their voice samples have to be collected so that the same can be compared with the recording of the threat call received by the deceased.

Prakash Jarwal is the youngest MLA from AAP. Having left his job at an MNC firm to join Anna Hazare’s anti-corruption movement, he has quickly gone on to achieve notoriety in his brief political career –

It is clear that Arvind Kejriwal rules a mafia organisation disguised as a political party – a big chunk of Delhi MLAs have been arrested or accused of some crime or the other. His key lieutenants like Sanjay Singh, Amanatullah Khan etc are barely disguised criminal elements, while the party has retained some useful idiots like Atishi Marlena to fool the masses. Kejriwal himself has demonstrated megalomaniacal and psychopathic traits.