4 tricks perfected by Islamists and co. to whitewash their instigation of riots and violence 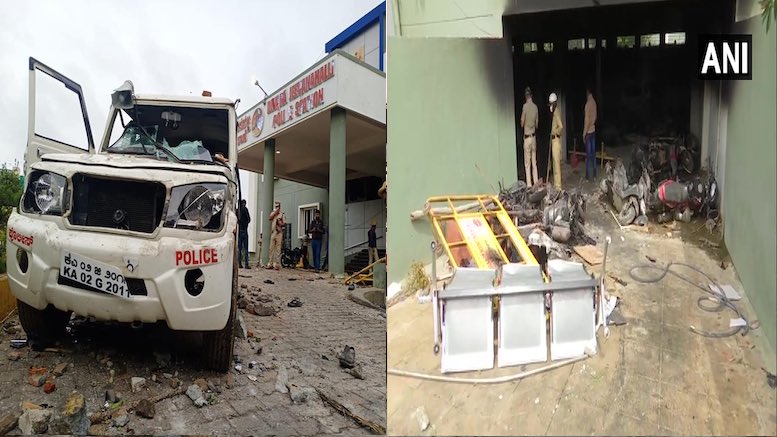 The rioting which engulfed Bengalaru last night in which 3 rioters were shot dead by police and over 60 policemen injured, is yet another example of the template and modus operandi which Islamists have perfected over the years.

1.) BLASPHEMY! We were provoked! Why didn’t police act on time?

The blasphemy trigger is a favourite tool of Islamists to intimidate critics and non-Muslims all over the world. Just in the last decade, we have seen this tool used to deadly effect in Kamlesh Tiwari’s murder, Baduria minor FB post, global violence over ‘Innocence of Muslims’ movie, Charlie Hebdo attack; in fact, attacks on Hindus in Bangladesh and Pakistan are often carried out after levelling fake charges of blasphemy.

For Bengaluru, what happened last night is a rerun of similar incidents from the past

in 2010, Kannada Prabha office was burned down in Karnataka leaving 2 dead for publishing a translated article of Taslima Nasreen https://t.co/CZmtY6perH

And the facts of this riot are now being turned on their head, to pin the blame on police for ‘not acting’ against the alleged blasphemer and firing at rioters.

Islamists are disappointed that the mob wasn’t able to overpower the police and lynch a few like they did with Constable Ratan Lal and DCP Amit Sharma during the Delhi riots.

All the secular politicians like Siddaramaiah, KTR (son of Telangana CM KCR) who are stressing more on need to avoid objectionable social media posts, rather than whole-heartedly condemning this violence are acting as enablers for Islamists. Should everybody who has a grievance (real or imagined) over a social media post or with the police, resort to such violence?

2.) It’s a conspiracy by ‘communal forces’, Muslims are the victims!

Cast your mind over some major Muslim-Hindu riots since the turn of the century. What was the initial spark?

After the initial spark has been lit, and even before the other side can realize what hit them, the Islamist-secular cabal starts spreading its theories – the train caught fire by accident, someone did a false-flag operation to target Muslims, riots were organised to polarise communities for elections, hate speeches by ‘communal’ politicians are responsible!

And if there is a backlash from the other side, then the narrative is quickly saturated with ground reports of Muslim losses, global allies are pressed into action, op-eds abound about the plight of minorities and the ‘othering’ of Muslims by ‘communal Hindus’.

We are seeing similar theories being peddled out in this case with Congress MLA Dinesh Rao sensing ‘a conspiracy in the way the Facebook post has been put out …to incite disturbance’ and deploring ‘crude attempt to communalise the issue’.

Months later, when the official secular epitaphs of these riots are written, the initial trigger is fully erased or obfuscated. For eg., despite court conviction of the accused, the secular cabal still maintains that the 2002 train burning was an ‘accident’ or a stage-managed act carried out as part of the ‘Hindutva laboratory’ of Gujarat. Stand-up comics like Munawar Faruqui call it an ‘Amit Shah production’.

Fact of the matter remains that in most riots, it actually is a pre-planned conspiracy of Islamists – in this case, SDPI leader Muzamil Pasha has been arrested for engineering the mob violence.

Another convenient trope trotted out after almost every riot is that it wasn’t us locals, but some mysterious outsiders brought in to spoil the harmony of our city/town. This again ties in nicely with the whole ‘riots are stage-managed for political benefits’ theory of TV talking heads. Even if some outsiders are brought in to augment the mob, it’s impossible for them to act without local mobilisation and connivance.

This excuse is also dished out because, now that the deed is done and immediate Islamist goals achieved, they still have to live with those blighted kafirs till the tables turn in their favor. This is a favorite excuse of secular politicians too, who prefer brushing real issues under the carpet and pretending ‘all is well’. But all the secular grovelling and appeasement will ultimately fail to satiate the Islamist monster, as the Dalit Congress MLA must today have realized.

Right on cue, the excuse was trotted out to deflect attention from the Bengaluru rioters-

An interesting observation about the above tweet informs us how language chauvinist seculars kow-tow to the Urdu-speaking Ashraf classes who refuse to learn the regional language of the state they belong to!

4.) We are peace-loving! We believe in Ganga Jamuni Tehzeeb!

Reports of Islamist “humanity”, protecting temples or lives/property of their Hindu neighbours emerge after every riot instigated by Islamists. The template was followed in the anti-CAA Delhi riots planned by Tahir Hussain and others where it was claimed that a Durga temple was protected by Muslims who formed a human chain and braved stones. The media, naturally, picks up these stories without much verification in order to obfuscate the issue and guilt trip Hindus.

Here too, similar propaganda is doing the rounds about a human chain being formed to protect a temple. But the attempt is lame as no one apart from Islamists was out rioting on streets.

This Human Chain Cyapa is a propaganda. Only pplon the streets were these guys, only folks who attacked @BlrCityPolice were these ppl and suddenly guard temple from whom? From Temple Worshippers? Not biting it. Had anything happened to temple, then they know damage would be high

Yet, Islamists know some useful idiots on the Hindu side will lap it up. So even though it has diminishing returns, such taquiya is still peddled.

Secular-minded aka brainwashed Hindus need to realize that riots are not engineered by some ‘communal’ netas keeping the next election in mind, just to enjoy perks of power. The Islamist goal behind riots, even those engineered by their superficially democratic parties like SDPI, is clear – to intimidate the secular state and majority Hindus, extract concessions and exceptional treatment, with the end goal of establishing an Islamic state.