Yogi Adityanath: a mere fanatic or a competent administrator? 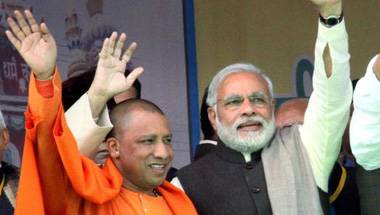 It seems that a certain section of the so-called-intellectuals, already wrote off the newly crowned  CM of UP, Yogi Adityanath, even before he actually took charge of the state machinery. Some media houses, due to their biases and pre conceived notions, have made Yogi the poster boy of communalism without even giving him a chance. So let us see the other side of the coin and go through the administrative highlights of the first two weeks of the Yogi’s innings as the CM of UP.

Since the Yogi has come to power, a number of illegal meat shops and mechanized slaughter houses have been shut down as stated in the BJP Sankalpa Patra (election manifesto). A matter that concerns the health and sanitation of the people is being given a communal colour. It is being wrongly manifested as being against a particular religion and an act of vindictiveness. The UP Health minister Siddharth Nath Singh has repeatedly said that license holders need not to fear.

This short video clip below shows a meat shop owner admitting how earlier they were operating with impunity as they had no knowledge of the norms and neither was the SP Government enforcing the rules. Now, they are finding out that everything needs to be done as per proper procedure –

23 special groups popularly known as Anti-Romeo squads have been set up across the state for ensuring the safety of women, specially after daylight hours. The squad consists of 1 sub inspector, 2 male and 2 female police personnel to ensure proper representation of women to prevent genuine couples from being harassed. However, there have been some reports that moral policing is being done in the name of women’s safety. What needs to be seen is the intention of the endeavour. Sincere efforts are being made to plug the loopholes. Strict action has been taken against a sub inspector of Meerut for harassing a girl in the name of guarding females.The CM himself has stated time and again that genuine couples should not be harassed in veil of this exercise.

In line with the BJP Sankalpa Patra, a ban has been imposed in UP on drinking booze in public places, outside liquor shops and in cars. The logic behind the decision concerns law and order and women safety. There have been reports since a long time that tipplers pollute the social order and transgress limits of decency, specially outside liquor outlets at night resulting in sexual harassment, road rage and disgraceful comments against ladies. Police teams out on night patrol will ensure that no such things occur.

The PWD has been given clear instructions to not only ensure smooth roads all over UP but also to keep the tainted contractors with mafia and corrupt image away from tenders to ensure the quality of work.

Abiding by the cleanliness drive, chewing  gutka and pan masala has been banned in all government offices across UP. Use of plastic has also been prohibited keeping in mind tidiness and protection of the environment.

Declaration of net worth within 15 days

Not only the MLAs but also the bureaucrats have been instructed to declare their net worth within 15 days. The Yogi government wants to lead by example in promoting its anti-corruption drive, initiating it with its own MLAs. If not anything, this has made CAs the most sought after breed in the state.

An aid of Rs. 1 lakh for all Kailash Mansarovar pilgrims

The Yogi recently hiked financial aid from Rs. 50 k to 1 lakh for all pilgrims that are healthy enough to pay a pilgrimage to Kailash Mansarovar. A journey to Kailash costs 2.5 lakhs per head on an average. Toeing the line of his slogan “ Development of all, Appeasement of none” Yogi has tried to strike uniformity between the Haj aid and the Mansarovar aid.

In addition to all this he has also taken the following remarkable steps :

Administrative decisions are being taken with the agility comparable to that of a war front. The aforementioned decisions may seem small but they are path-breaking in their own way and will lay the foundation of transforming Uttar Pradesh into Uttam Pradesh.