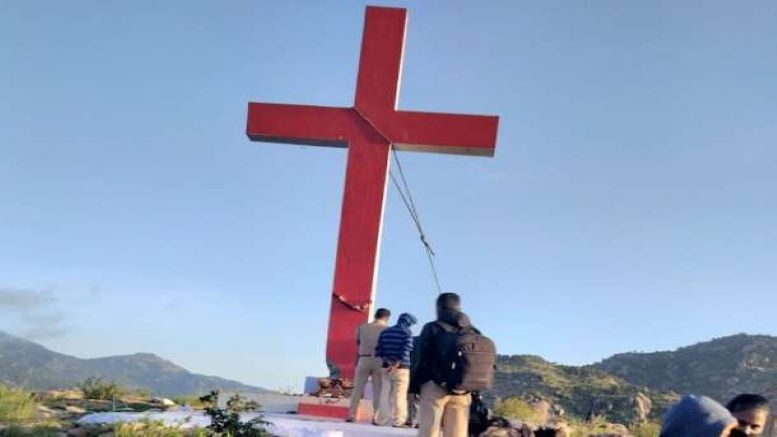 In a much-needed action, CM BS Yeddyurappa led the Karnataka government moved to remove a total of 15 crosses illegally built on government land atop Chikkaballapur Hill by Kerala based St. Joseph Church on 23rd of September.

As per available information, on September 23rd a team comprising of 300 revenue and police officials reached St. Joseph’s Church in Arikere located in Chikkaballapur district to remove crosses erected illegally by the Church on 173 acres of government land.

The operation which lasted for around six hours saw the removal of a 32-meter long cross on top of the hill along with 14 other crosses en route to the top being removed as well. According to sources, the action was taken on the basis of the order issued by the Karnataka State High Court.

The land is “Gomala” land meaning land for cattle grazing belonging to the state government. It is a public space where people of the area can take their livestock for grazing. It has been learnt that out of the 173 acres, one acre had been given for a burial place while two acres had been handed over into the possession of a villager whose ancestors had dwelled there.

However, the rest of the 170 acres which is actually government land and meant for common use by the public had been grabbed by the St. Joseph Church who had erected crosses both atop and on the way to the top of the hill. It was these illegal constructions that the authorities removed on 23rd September.

Christian missionaries have been attempting to illegally take over public lands in Bharat. Hindupost had earlier reported how forest land in Chikkamagalur had been taken over by missionaries who had raised a Jesus statue atop the hill in violation of the laws of the land.

Laws of the land are equally applicable to all and any illegal occupation or construction must be removed.