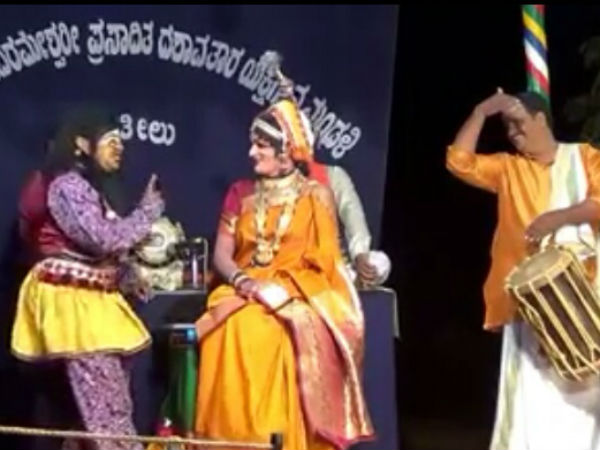 A drama artist of a troupe belonging to a Government-controlled temple in Congress-ruled Karnataka has been suspended for the ‘crime’ of allegedly imitating Rahul Gandhi while performing in a play ‘Devi Mahatme’ performed as part of Yakshagana traditional Hindu theatre, Deccan Chronicle and various other media outlets have reported .

Poornesh Acharya, an artiste of Yakshagana Mela (team) of Kateel Durga Parameshwari Temple which is controlled by Karnataka government’s endowment department (HRCE), was performing the Devi Mahatme Yakshagana. Enacting the role of Dhoota, the messenger and comic, he delivered the line ‘Ivnarva Ivnarva…. Ivnamva Ivnamva” allegedly  mimicking Congress president Rahul Gandhi whose inability to pronounce the Kannada words from a vachana of Sri Basavanna properly during his Janashirwada Yatra in Uttar Kannada in February had become the butt of many jokes on social media.

Poornesh Acharya’s comic jibe also had the line,  ‘Nudidanthe Nade ”  similar to the slogan which the state government has been using as a poll slogan.

“The clipping of these two lines being uttered by Poornesh Acharya had gone viral in the social media. Considering it as violation of election code, a notice has been issued today,” returning officer V Prasanna told Deccan Chronicle.

Speaking to Manguluru-based Daijiworld, Prasanna V said, “When we came across the clip on April 3, we took suo moto cognisance and investigated the matter and found that the artiste had enacted the sequence after the election code of conduct had set in. Though Rahul Gandhi’s name is not mentioned, it is a direct implication to him. We have informed the temple authority who has suspended the artiste.”

The News Minute has reported that EC officers are now attending Yakshagana performances (usually held from dusk to dawn) across coastal Karnataka to ensure ‘non-propagation of political messages’! They are also insisting on pre-submission of show scripts before performance.

The Election Model Code of Conduct (MCC) is a set of guidelines issued by the Election Commission of India for conduct of political parties and candidates during elections – it comes into force immediately on announcement of the election schedule by the Commission. Karnataka is slated to go to polls on 12 May for state assembly.

Now, three questions need to be asked in this episode – 1.) Do Poornesh Acharya’s comments, wherein he neither directly mentioned any politician nor endorsed any political party, constitute illegal political canvassing or violate the code of conduct in any other way? 2.) Does the fact that Poornesh was performing in a troupe sponsored by a Government controlled temple, make him a ‘Government ’employee’? Was he suspended because of this interpretation, as Deccan Chronicle has reported?  3.) How does this incident compare to election-time comments by Christian & Muslim religious bodies exhorting their faithful to vote on religious lines, for ‘secular’ parties or even to vote against ‘nationalist forces’?

But before we get to those questions, another more basic question arises.

When & Where was the play performed?

The Hindu newspaper (which ironically represents anything but the Hindu point of view) has reported that the alleged imitation took place in the Devi Mahatme Yakshagana staged in Padamannooru near Moodbidri on 1 April.

Deccan Chronicle has reported that the drama was being performed ‘on the day that elections were announced in Karnataka’ i.e. 26 March, and that it was enacted ‘just across the border, in neighbouring Kerala.’

Times of India seems to have been the first to report this issue, but their report was filed on 31 March, 2018, which means that The Hindu‘s claim that the play was performed on 1 April is incorrect.

So the following questions need to be answered – when and where was the play where the alleged imitation took place performed? If it was performed before the model code of conduct came into effect, or in Kerala, then this is a clear-cut case of political vindictiveness.

We decided to speak to Dakshin Kannada District Election Officer S. Sasikanth Senthil to gather more light on the topic. He acknowledged that the notice was issued to the troupe by RO Prasanna V, but said that the matter never reached him as the troupe didn’t contest the notice & went ahead to suspend the artist. He confirmed that the Election Model Code of Conduct applies only to political parties and not to individuals. He also said that he would have examined the legality of the whole matter if it was brought to him, but Poornesh Acharya cannot be called a ‘Government employee’ as he was just a member of a drama troupe sponsored by the temple.

Mr. Senthil said that the increased monitoring of Yakshagna performances was to ensure that no political party sponsors any such act without first informing the Election Commission.

We tried to contact the Kateel Durga Parameshwari Temple to get their version of events but were unable to do so.

By all accounts, Poornesh Acharya made an innocuous comment, leveraging a recent event to improve the humour quotient in a comic role during a traditional art performance totally unrelated to politics. To draw an analogy, what he said was far less political than the ‘Acche Din’ jibes targeted at Modi by stand-up comics and FM radio hosts. And what he said pales completely when compared to the communal directives which emanate from ‘minority’ religious bodies just before elections. But if any similar action were to be contemplated against the left-liberal urban elite or minority religious institutions citing the Model Code of Conduct, the Congress ecosystem would have outraged and brought Parliament to a stand-still.

Poornesh Acharya is a poor artist who is trying to keep an old Hindu Dharmic art form alive – moreover, the pittance he would be receiving from the Kateel temple is controlled by Siddaramaih’s Government. So his voice has been silenced and he has been rendered jobless, but our elites care two hoots. This is the reality of Hindu human rights in the country today, especially under secular regimes like the ones we currently have in Karnataka, West Bengal, Kerala.