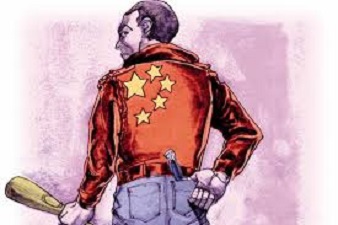 The Red army’s hegemony and its nefarious designs were on full display as Bharat and world bully China prepared for a face off at Doklam in the Eastern sector.

China is again impinging upon Bharat’s Sovereignty and that of a friendly country Bhutan which has no diplomatic relations with China and deals with the latter through its consulate in New Delhi. It was natural for Bharat to come to Bhutan’s help when the latter called for assistance once its boundaries were threatened by the dragon which was building a road in Doklam, a part of Bhutan. The Doklam area is a vital link for Bharat in maintaining its sovereignty over Sikkim and 6 other north-east states. The Chicken neck, as this area is popularly known because of its narrowness, is a vital and strategic link. China’s posturing has to be met in the eye by Bharat which has rightly reinforced troops in the area on the call of its friend and neighbor Bhutan. Bharat cannot afford to betray Bhutan and has to maintain an unflinching and combative approach to protect not only the sovereignty of its close friend Bhutan, but also to make sure that China does not ride roughshod and  bully Bharat just as it has bullied Philippines and Japan in the past in South China sea.

Bharat could earn the respect of the whole world if it does not cave in to China’s posturing and antics. Morally also Bharat is on a high ground as its intentions and actions are a result of Bhutan’s cry for help. Bharat is bound by the Indo-Bhutan friendship treaty of 1949, since revised in 2007. Article 2 of the 1949 treaty states that Bhutan will be guided by the advice of Bharat on external affairs, which has since been revised and now says that neither side will allow the use of its territories for activities harmful to the national security and interest of the other and that both countries will cooperate closely with each other on issues relating to their national interest.

China’s attempt at road construction in Dokalam is an attempt to change the status quo and smacks of irresponsible behavior by an emerging super power and a member of the UN Security Council. The Indo China border agreement of 2013, Article viii says that if the border defence forces of the two are in a face-to-face situation in areas where there is no common understanding of the Line of Actual Control (LAC), both sides shall exercise maximum self-restraint and refrain from any provocative actions, not use force or threaten to use force against each other, and prevent exchange of fire or armed conflict.

Bhutan on its part has already clarified that the Chinese incursions (road building mearsures) go against the 1988 and 1998 agreement that call upon both countries to maintain peace and tranquility until final settlement is reached on the boundary. The 2012 agreement between Bharat and China also says that the tri-junction boundary issue needs trilateral consultations.

Off late, China under Xi Jinping has got into the habit of riding roughshod over its neighbors and tries to steam roll them as part of its hegemonic designs in the region. It has done so with little or no resistance from countries like Philippines, Japan and Mongolia. But Bharat is a different cup of tea as China has learned to its chagrin and that’s what rattles it. On the eve of the G-20 summit in Hamburg, Germany, China tried to pull off a diplomatic coup by saying that it had cancelled the bilateral between Modi and Xi Jinping because the atmosphere was not conducive for talks. However Bharat was quick to call China’s bluff saying that no such bilateral was planned.

Bharat’s boycott of China’s OBOR opportunism together with stiff opposition to CPEC has obviously upset China, which was already peeved with the Dalia Lama’s visit to Arunachal where its warnings  were brushed aside by  Bharat. China is also flummoxed at the joint naval exercises to be carried out by the navies of US, Japan and Bharat (Malabar drills). China’s sympathies lie with designated international terrorists Hafiz Sayeed and Syed Salahuddin and backing of a terrorist state like Pakistan, thus lowering its own credibility in the eyes of the international fraternity. It is unable to rein in a rogue nation and a rogue neighbor like North Korea inspite of repeated American requests, thus earning the latter’s ire.

Being an emerging superpower China has to decide on which side of the world order does it stand – does it stand with the rogue nations or does it stand with the civilized world? For now, its image stands tarnished as a world bully and a superpower gone amok. Bhutan and Bharat should up the ante diplomatically and Bharat should convince Bhutan, bound by their treaty of friendship, to lodge a formal complaint at the United Nations. Simultaneously, Bharat should rally solidly behind Bhutan on the Doklam plateau and match China soldier to soldier. Apart from this, Bharat needs to launch an economic crusade against China by addressing the 60 billion dollar trade surplus that China enjoys vis a vis Bharat. Imposing trade restrictions on Chinese goods would pinch it the most and curb its marauding instincts.