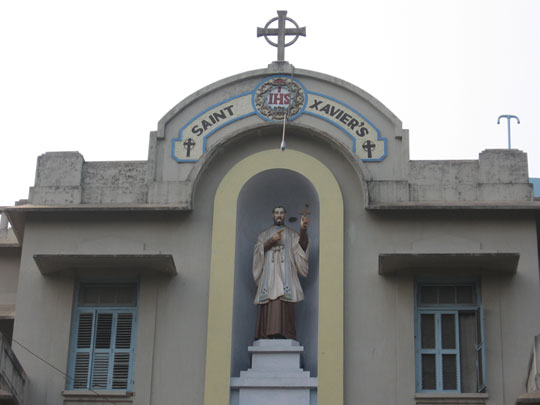 Two women teachers, Nutan Joseph and Indu, of the ‘reputed’ St. Xavier’s missionary school in Patna were arrested last Saturday for allegedly having sex with a five-year-old girl student.

“The victim is a LKG student of St. Xaviers School near Gandhi maidan in Patna.

Patna Senior Superintendent of Police Manu Maharaj said two female teachers were arrested after an FIR was lodged against them under sections 376 of IPC and Protection of Children from Sexual Offences Act, 2012.

“Police have been interrogating them at woman police station here, they may or may not be produced before the court on Saturday,” he said. He said police have also interrogated the school Principal, Father Jacob, over the incident.

Medical examination of the victim has confirmed internal injuries to her private parts, the police said. The police have recorded statement of the victim’s parents. Maharaj said he has asked Patna city Superintendent of Police Chandan Kushwaha to investigate into the matter.

According to the FIR, filed by victim’s grandfather, the child had complained to her mother about the pain in her private parts and informed her that two female school teachers, whom she addressed them as “Badi Mam” and “Chhoti Mam”, had been playing with her private parts in a room despite her protest.

“Victim even revealed to her mother that two accused female teachers during school time used to take her to a closed room, undress her and played with her private parts.”

A team of Forensic Science Laboratory (FSL) experts have visited school premises where the girl was allegedly sexually exploited on a portable bed and collected evidences.”

“Senior SP Manu Maharaaj and city SP (central) Chandan Kumar Kushwaha told HT that the two teachers arrested in the case were identified as Nutan Joseph and Indu. They said, both the teachers during their interrogation denied having molested the five-year-old student and dubbed the charges baseless.

“We are trying to find out whether there was any involvement of a male teacher in the incident. The investigations are still on,” said, a senior police officer, involved in the investigations.

Kushwaha added that the medical examination of the minor had confirmed sexual assault and an old rupture was found in her private parts. The medical tests, police said, also indicated that the victim could have been repeatedly assaulted.”

As per Hindi media reports, the school principal, ‘Father’ Jacob is also under suspicion and his role is being investigated by police. It is said that the school management was very lackadaisical in the entire matter – when the parents approached them to complain about the sexual assault on their daughter, they were ignored.

This is not the first instance of horrific child abuse being reported from a Christian missionary school, orphanage, children’s home, or by Christian clergy. Some other recent cases –

Oct, 2016: A Christian priest, ‘Father’ Joao da Silva, 54, was found sexually abusing a five-year-old girl during English classes held by the pastor at a local church.

Aug 2016: A Christian pastor, M James, was arrested for duping minor children and forcing them into begging at traffic signals in the IT Corridor in Hyderabad, on the pretext of providing education to them at his orphanage ‘Bhrama Puthra Social Service Society’

Dec 2015: Forcibly converted to Christianity, hung by the wrists from a ceiling fan, starved for days, force fed beef and beaten mercilessly for failing to recite Bible passages—this is what a nine-year-old boy had to endure at an illegal Christian shelter run by the Emmanuel Seva Group in Greater Noida and Meerut.

Mar 2013:  Grace Home, run by Pastor Jacob John, was raided in March 2013 and 53 children from North Eastern states like Manipur and Nagaland rescued. 4 children died due to their ordeal, a number of minor girls were sexually exploited, one got pregnant, and many suffered from severe physical deformities and mental retardation.

Since the late 1980s, several hundreds of cases of child sexual abuse crimes (and subsequent cover-ups) committed by Catholic priests, nuns, and members of Roman Catholic orders have come to light in countries across the world. From 2001 to 2010, the ‘Holy See’, the central governing body of the Catholic Church, considered sex abuse allegations concerning about 3,000 priests dating back up to fifty years.

Given the spate of such crimes happening frequently in Christian institutions, the politically incorrect question must be asked – is the core Christian theological belief of faith in Jesus as the basis of salvation, not any action of our own, creating an enabling environment for such crimes?

Christian missionaries preach that accepting Jesus Christ as one’s saviors assures heaven after death, irrespective of the good or bad deeds one might have done. Christianity promise forgiveness of all sins and everlasting salvation by belief in Jesus. It says that Jesus died on the cross to save us from our sins and the original sin of Adam and Eve, which his blood washed away.

The level of indoctrination can be gauged by listening to Dr. VK Williams, Director of Mount Carmel Schools, New Delhi addressing a morning assembly –

” I have a living hope that if I die right now, I will go to heaven – not because I am a good man, but because the Lord Jesus Christ forgave my sins, he paid the penalty of my sins on the cross.”

On the other hand, Dharma encourages us to inquire into our inner nature through examining our own minds, getting rid of mental impurities through various dharmic philosophies and practices, and striving to come to a direct realization of truth.

With such a ‘clean chit’ (belief in Jesus) available to them whatever their deeds, it is plausible that many authority figures in Christian institutions like pastors, priests and teachers believe they can do anything and later beg forgiveness from Jesus…their dictum being – to sin is human, to forgive divine.