Woman Assaulted for Protesting Against Molesters in Samajwadi Heartland, Mainpuri UP 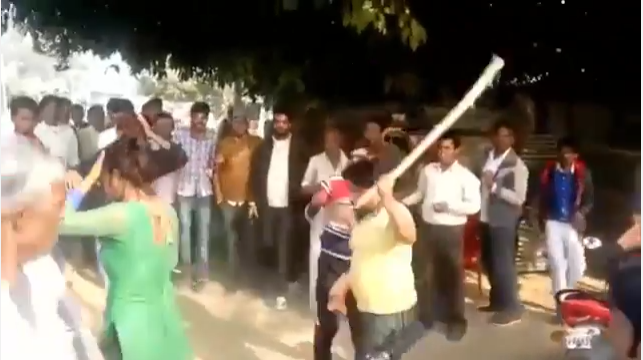 In a gut-wrenching incident from Mainpuri, Western UP, a newly married woman and her husband were assaulted by two goons, when they resisted their bid to molest the woman.

The incident happened when the couple was enquiring about an address, one of the assaulters tried to pull her ‘dupatta’ and also groped her. When she and her husband resisted, the two were beaten with a stick. The lady suffered a head injury and can be seen bleeding & crying in this video –

One of the attackers, who has been identified as Anand Yadav, also hurled abusive language against the lady. The couple registered a complaint with the police and the lady threatened to shoot herself, if the culprits were not nabbed.

Mainpuri district lies in the Agra division of Uttar Pradesh. Since 1996, Mainpuri Lok Sabha seat has been held by the Samjwadi Party (SP), with party supremo Mulayam Singh Yadav being 4-times MP from this constituency, which is presently represented in Parliament by 29-year-old Tej Pratap Singh Yadav, the grand nephew of Mulayam and son-in-law of RJD boss Laloo Prasad Yadav.

This episode symbolizes the situation on the ground today in UP – it is a state where law & order has totally collapsed and certain groups of people believe they can get away with anything. SP rode in to power in 2012 on the back of their Yadav-Muslim votebank, and since then the people of UP have suffered a reign of terror unleashed by rogue elements from these two communities who enjoy political patronage.

Back in August, a local SP leader had claimed that ‘UP is for Yadavs & Muslims, other communities will be thrown out like Kashmiri Hindus’. The Kairana exodus shows that this is no hollow threat, and with cases of rape, molestation and sexual harassment being reported from UP (especially Western UP) on a sickeningly regular basis, every individual in UP today who does not enjoy the patronage of the ruling SP party feels that she/he is under siege.

Will anyone in media have the guts to question Mulayam and Akhilesh for this latest sickening crime from their party’s votebase heartland? Or will this too be swept under the carpet like the innumerable rapes, riots and Kairana exodus witnessed under SP rule? After all, for the media, such crimes and suffering is a small price to pay at the altar of secularism.