What’s The Real Story Behind Najeeb Ahmed Episode in JNU? 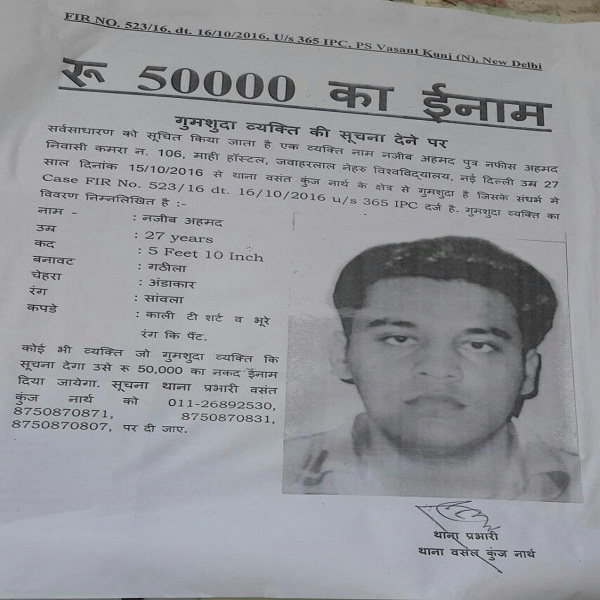 Things took an unnecessarily chaotic turn in JNU university when students protesting to find out an allegedly mentally disturbed student, Najeeb Ahmed, rounded up the Vice Chancellor of the university along with other teachers & administrative staff and confined them like hostages for the entire night yesterday. The JNU VC, Sh. M. Jagadesh Kumar, finally took to Twitter to express concern and appeal to protesters :

Students are still blocking all the exit points of admin building. Few persons need medication and are feeling week.

The VC tweeted and appealed to the students to let the university staff go home for the night since some staff members suffer from chronic illnesses and need to follow their schedules and medications.

We met JNUSU leaders explained to them our sincere efforts in locating the missing. No relenting. It is 2 am. We are still confined.

The protesters did not relent and the staff spent the whole night in confinement without proper food and medicines. The last tweet of the VC today till 2 pm was this :

Today we have Academic Council mtg at 2.30 PM and it should go on with no interruption. Appeal to agitating students of JNU below: pic.twitter.com/kNduBIXO16

The VC again appealed the protesters to withdraw the agitation as it is illegal and unlawful, specially the physical confinement.  He also expressed concern over external elements trying to communalize and politicize the entire incident. JNU’s Academic Council meeting was scheduled at 2.30 pm and the VC spoke to media after coming out :

The disappearance of Najeeb Ahmad after initiating a scuffle, where he beat a student for wearing a sacred thread, and then getting beaten in retaliation, seems to have given a reason to JNUSU to launch another agitation.

Abhinav Prakasha, a columnist and JNU alumnus, who is in touch with JNU students tweeted what started the scuffle :

Here is what I learnt about the #NajeebAhmad incident #JNUviolence.- ‘On night of 14-15 October, Vikrant, Sunil & Ankit who wr candidates /1

The JNU administration has made public the details of the incident for transparency. Students of JNU took to social media to express what they saw :

Even common students of #JNU have started speaking up on #NajeebAhmed & #JNUviolence. Everyone knows the reality of what happened. #JNU pic.twitter.com/IFv0h7PRQc

From our sources in JNU, it is clear that JNU administration has decided to make all information public regarding this incident so as to prevent any adverse law & order situation. The police has declared a Rs. 50000 reward for anybody willing to give information about Najeeb Ahmad’s whereabouts. From this poster in JNU, it is clear that the FIR was filed on 16th during the day itself :

However, the JNUSU president, Mohit Pandey, still called out for a protest on 16th Oct at 9.30 pm claiming that administration has not filed any police complaint. Here is a screenshot of Mohit Pandey’s group asking the students to collect via social media on 16th night:

So the case indeed seems to have been politicized for communal reasons, many people on social media are raising concerns if the boy Najeeb is a victim of communal politics by vested interests/ ‘Leftist – Marxist – Dalit’ groups just like Rohit Vemula :

In fact, the minutes of the emergency meeting taken by warden of the concerned hostel where this incident took place, clearly holds Najeeb responsible of initiating scuffle which he agreed to. It was decided to expel him from the hostel and he was requested to vacate the room on or before 21st October. This meeting’s minutes were also signed by JNUSU president : Now why did Najeeb suddenly disappear without informing his mother and leaving his belongings behind, is the real question. The common reason floating in the mainstream media for the violence initiated by Najeeb and then his disappearance is, that he claimed to be mentally disturbed, however, the application filed by his roommate, Mohammad Qasim mentions that he did not find any temperamental issues with Najeeb. Qasim, in this letter, has requested the authorities to take ‘a strict disciplinary action’ against Najeeb. He also expressed that he feels ‘threatened’ by Najeeb’s behavior.

So, there seems to be a lot more to this incident than what meets the eye. Meanwhile, the VC and the staff have been suffering major inconvenience because of ‘forced confinement’ by protesters. Watch this video of professor pleading with protesters :

#JNU watch this professor pleading to goon studentsAmbulance should be on standby for the diabetic hostage. Terrible politics. pic.twitter.com/GUMTOoOSwU

This kind of unlawful behavior reflects what can be termed as ‘student militancy’; we hope the situation is resolved and the boy Najeeb is found. Authorities should take strict action against the student leaders who resorted to illegal & life-threatening confinement of VC and other staff.

(We thank Amba Shankar for speaking to us and providing information).