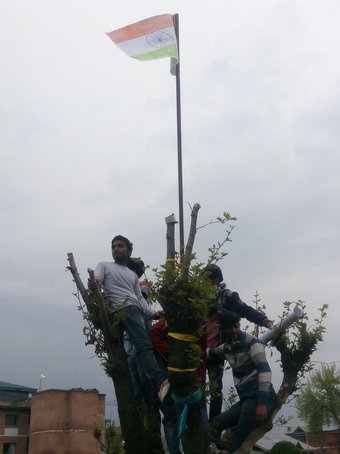 The full horror of what the outstation students at NIT Srinagar have undergone in the last 1 week is coming out only now. After the brutal assault by J&K police and unsympathetic attitude of college authorities to their plight created a furore on social media, the Union Government finally reacted and posted CRPF in the college and sent an MHRD (Ministry of Human Resource Development) delegation to meet & assuage the students. Finally feeling secure, the students opened up to reveal the extent of the intimidation and persecution they have been facing for long in the institute. Watch this video below of the interaction where girl students can he heard talking about the kind of threats they face –

These are the key points made by the girl students:

This video sees the student’s presenting their demands –

Rape threats by Kashmiri students against non-Kashmiri women students in #NITSrinagar met with silence by liberal poseurs. Secular veils off

This episode in NIT Srinagar also raises serious questions on the nature of our democracy and how separatism in Kashmir has been allowed to fester for so long. HinduPost will attempt to address some of those questions in a subsequent article. But for now, we request everyone to listen to these brave students and raise awareness on this serious issue so that the Authorities are forced to consider their genuine demand – the safety of these students is non-negotiable. There has been a welcome initiative #ChaloNIT announced by some brave-heart citizens which we hope sees maximum participation from fellow citizens of Bharat –