West Bengal, which is midway through its poll process, as well as Tamil Nadu, Assam, and the Union Territory of Puducherry, where voting has concluded, witnessed a massive surge in Covid cases since the Assembly elections were announced by the Election Commission on February 26.

Kerala, however, saw a small dip. 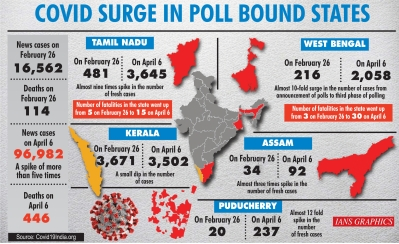 Soon after the announcement of polls in four states and the Union Territory, all the political parties kickstarted their election campaign – and the effect was soon visible.

All candidates carried out massive campaigning in their areas. The candidates and senior political leaders have held road shows, public meetings, processions to reach to the voters, with Covid norms of face masks and social distancing generally given the go-by.

According to Covid19India.org data, West Bengal, which recorded 216 cases on February 26, saw cases go up almost 10 times to 2,058 cases on April 6, the day of the third phase of its eight-round poll.

Even the number of fatalities in the state went up from three on February 26 to 30 on April 6.

Similarly, Tamil Nadu too was not left out of the phenomenon as it witnessed almost nine time spike in the number of fresh cases.

The state had recorded 481 cases on February 26, while on the day of voting on April 6, it recorded 3,645 cases. Even the rate of fatalities due to Covid witnessed a three-time spike from five on February 26 to 15 on April 6.

Kerala, which was recording over 3,000 cases in February, however witnessed a small dip in the number of cases on April 6.

Even Assam witnessed a massive surge in the number of Covid cases from February 26 to April 6. The state, which voted in three phases on March 27, April 1 and 6, had recorded 34 cases on February 26, but saw the tally rise to 92 cases on April 6.

The effect of election was visible in Puducherry too, as it witnessed almost 12 times spike. The Union Territory had recorded 20 cases of Covid on February 26 while on April 6, it recorded 237 fresh cases.