The Bharatiya Army has conducted a surgical strike in PoK (Pakistan Occupied Kashmir) last night to destroy 7 terrorist camps where jihadi terrorists were amassed to infiltrate into Bharat. It is reported that 35-40 terrorists and 9 Pak Army soliders, who had come to the aid of the terrorists, were killed in the operation. There were no Bharatiya casualties during the strikes.

The operation was a combination of heliborne and ground forces with soldiers penetrating up to 3 km inside PoK. Special forces of the Army were para-dropped for the operation which, significantly, took place at 4 different locations – Bhimber, Hot Spring, Kel and Lipa sectors of the 742-km LoC.

1. It has been a matter of serious concern that there has been continuing and increasing infiltration by terrorists across Line of Control in Jammu and Kashmir. This is reflected, amongst others, in the terrorist attacks on 11 and 18 September 16 in Punch and Uri respectively. Almost 20 infiltration attempts have also been foiled by the Army at or close to the Line of Control during this year.

2. During these terrorist attacks and infiltration attempts, we have recovered various stores including GPS and items that clearly indicate their origins in Pakistan. Furthermore, captured terrorists hailing from Pakistan or Pakistan Occupied Kashmir have confessed to their training and arming in Pakistan or territory under its control. The matter had been taken up at highest diplomatic levels and through military channels. Bharat has also offered consular access to these apprehended terrorists for Pakistan to verify their confessions. Furthermore, we had proposed that fingerprints and DNA samples of terrorists killed in Punch and Uri could be made available to Pakistan for investigation.

3. Despite our persistent urging that Pakistan respect its January 2004 commitment for not allowing its soil or territory under its control to be used for terrorism against Bharat, there has been no let up in infiltration and terrorist actions from across the Line of Control. If damage was limited, this was primarily due to the efforts of our soldiers deployed in our multi-tiered counter-infiltration grid that has been effective in neutralizing infiltrating terrorists. The Bharatiya Armed Forces have been extremely vigilant in the face of this continuing threat.

4. Based on receiving specific and credible inputs that some terrorist teams had positioned themselves at launch pads along Line of Control to carryout infiltration and conduct terrorist strikes inside Jammu and Kashmir and in various metros in other states, the Bharatiya Army conducted surgical strikes at several of these launch pads to pre-empt infiltration by terrorists. The operations were focussed on ensuring that these terrorists do not succeed in their design to cause destruction and endanger the lives of our citizens.

5. During these counter terrorist operations significant casualties were caused to terrorists and those providing support to them. The operations aimed at neutralizing terrorists have since ceased. We do not have any plans for further continuation. However, the Bharatiya Armed Forces are fully prepared for any contingency that may arise.

6. I have been in touch with Pakistan Army DGMO and have informed him of our actions. It is Bharat’s intention to maintain peace and tranquillity in the region. But we cannot allow the terrorists to operate across the Line of Control with impunity and attack citizens of our country at will. In line with Pakistan’s commitment in January 2004 not to allow its soil or territory under its control to be used for attacks against Bharat, we expect the Pakistani army to cooperate with us to erase the menace of terrorism from the region.

In Jun 2015, the Army had carried out the first of its kind surgical strike in Myanmar to destroy two camps of NSCN(K) and KYKL terrorists. The Government of Bharat had then said it is a lesson to all terrorist groups that it will not hesitate in going beyond its borders to eliminate terrorists.

A little over an year later, with the latest strike on terrorist camps in PoK, it can be safely concluded that the strategy of pre-emptive cross border strikes on terrorists in now an integral part of Bharat’s security doctrine.

Interestingly, an earlier report in Quint.com had claimed that on the night of 2o Sept, the Bharatiya Army had conducted a cross-border strike on 3 PoK terror camps. Was that earlier story leaked by Bharat to lull Pakistan into a false sense of complacency, before the actual strike last night?

Pakistan has denied that any such strike took place last night, and called it cross-border firing. Pakistan’s Inter-Services Public Relations in Rawalpindi  issued a statement that the claim of surgical strike by Bharat is ‘fabrication of truth’.

This response by Pakistan is not unexpected given the way they had disowned their own Armymen during the Kargil war – a bully is essentially a coward. While presenting a brave face to the world, this action by Bharat will have shaken the Pakistani establishment to the core as it throws their decades old ‘bleed Bharat with a 1000 cuts’ strategy in disarray. They are likely to respond with more terror attacks, possibly targeting Bharat’s cities – but now they know that there are serious costs associated with using terror as an instrument of foreign policy.

Through this surgical strike and by reviewing the MFN (Most Favored Nation) trade status for Pakistan, the Modi Government has now acted on two of the three options listed in a poll conducted by HinduPost in the immediate aftermath of Uri attacks – 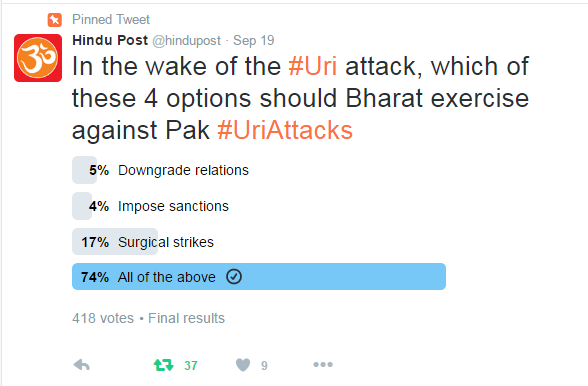 We do not claim to be advising the Government on foreign policy, but just want to reiterate the point that ordinary common sense can provide better insight on various issues facing the nation, rather than the elite intelligentsia / left-liberal media commentators that had all along been singing paeans to the failed ‘strategic restraint’ response to Pakistan-sponsored terrorism.