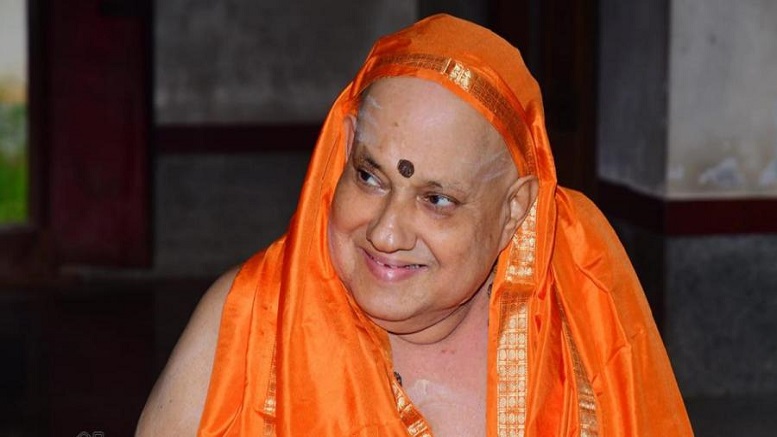 The pontiff of Edneer Math in Kerala, Swami Keshavananda Bharati ji attained mukti today. He was 79 years old. Swamiji was not only a towering religious personality, but also the person who saved the constitution from Indira Gandhi’s tyranny. The eponymous case, which was decided in 1973, has been one of the most celebrated cases of Bharatiya jurisprudence for almost 5 decades.

Under Kerala Land Reforms Act 1963, the state acquired land belonging to Edneer Mutt in Kasargod. A young Keshavananda Bharti was the Swamiji of the mutt and he filed a writ under 32 for enforcement of fundamental rights of religion, freedom to acquire property and right to property.

Indira Gandhi had already taken a socialist turn by that time. Although the courts tried to stop her dictatorial tendencies, she always responded with more constitutional amendments. In recent past, Supreme Court had struck down Bank Nationalisation in Cooper case and also struck down the Presidential order for abolition of Privy Purses in Sindhia case. According to the judgement in I. C Golaknath case, court had made Fundamental Rights as sacrosanct, which could not be amended.

Indira Gandhi responded with more amendments that nullified the impact of above judgements. She enacted  24th, 25th and 29th Constitutional Amendment Acts for this purpose.

The case for Swamiji was taken up by eminent lawyers Nani Palkhivala, Fali Nariman and Soli Sorabjee. The scope of the case was wide as Swamiji challenged all the above amendments and the power of Parliament to make arbitrary changes in the Constitution. It must be remembered that Congress and their communist lackeys, who now claim to abide by the constitution were at that time foremost in changing the character of the Constitution in 1970s.

A bench of Supreme Court comprising 13 judges heard this case. This is till date the largest bench in Bharat’s constitutional history. It gave a judgement by a majority of 7:6. The judgement asserted the supremacy of the basic features of the constitution even while accepting that Parliament had the power to amend it.

The “basic feature doctrine”, which even today acts a check on the tyranny of the elected government, states that Parliament cannot amend any part of the Constitution in violation of its basic features. However, the basic features were left undefined and were to be enumerated by the Supreme Court as and when necessary.

This judgement, delivered in 1973, was an effective check on the dictatorial changes in Constitution by Indira Gandhi. Directive Principles were being used by Mrs. Gandhi to fulfill her socialist agenda. It tried to balance Fundamental Rights with Directive Principles in a harmonious manner and also protected individual rights to an extent.

The judgement did not endear the judiciary to the reigning PM. The judgement was delivered on 24th of April, 1973. As the Chief Justice S. M. Sikri retired on the very next day, Indira Gandhi appointed his favourite A N Ray as the Chief Justice, after superseding 3 senior judges. A. N. Ray had supported govt’s position in the judgment.

The new Chief Justice was totally subservient to Indira Gandhi and even tried to review the judgement without any application for the same by anyone! In his tenure the infamous ADM Jabalpur judgement, which practically legalised the brutality of Emergency, was delivered. Justice H. R Khanna, who was the real author of ‘basic structure’ doctrine and later the sole dissenter in ADM Jabalpur judgment. This upright man was subjected to humiliation by Indira Gandhi when he was superseded for post of Chief Justice and M. H Beg was made CJI. Both these appointments were widely protested by the legal fraternity.

Indira Gandhi still changed the Constitution by 42nd Amendment Act, 1976. Bharat was declared a “socialist” and “secular” republic and the amendment practically made judiciary subservient to Government. Almost all the parts of constitution were impacted. Probably, it was the Keshavananda Bharathi judgment that stopped Gandhi from doing even more harm and declaring herself dictator for life. The Janata govt reversed many of the more dangerous provisions of 42nd Amendment in 44th Amendment.

As Kesavananda Bharati leaves for his heavenly abode, we must also remember the actions of Indira Gandhi that almost extinguished democracy in Bharat. Swamiji did not get the land back for the Mutt, but he made a much more lasting contribution for the country.