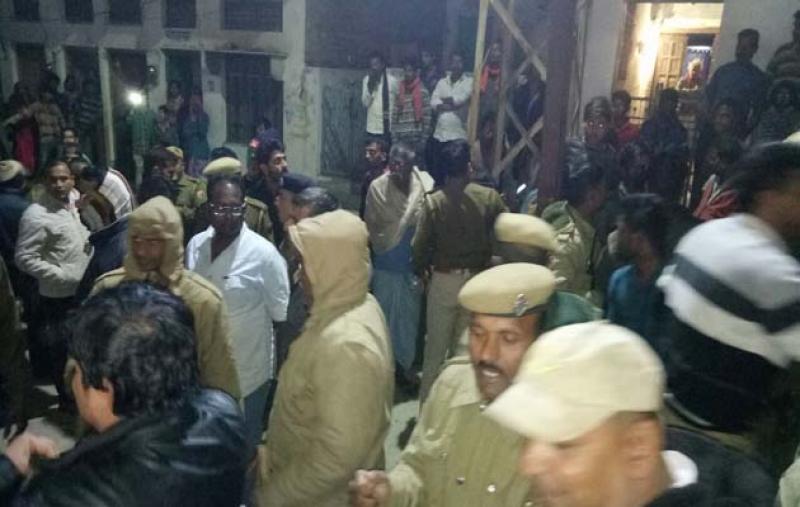 A tribal youth, Prakash Bheel (18), was brutally attacked inside his home by a group of 5 Muslims on Sunday night at 10:00 pm near Jalchakki Chaumukha Mahadev Mandir of Kankroli, Rajsamand district, Rajasthan. 3 relatives of the youth were also injured in the attack. Prakash was gravely injured and covered in blood when he was taken to the hospital by his relatives. It is believed that a minor argument earlier in the evening led to the vicious attack with knives and sticks at night. Police registered a case against the named attackers – Shahrukh, Shahil, Safa, Chhapri and Jakir Hussain have been named as accused in the attack.

Resident of Jal Chakki, Prakash Bheel was attacked by the 5 member Muslim gang with sticks and sharp weapons over a petty argument. When his uncle Daluram Devram Bheel (55), cousin Kishan Bheel (24) and his mother came to his rescue, they too were attacked by these goons and severely injured. Additional police superintendent Manish Tripathi along with other police officers arrived at the scene after getting the information and took note of the situation.

Bhagwati Lal Paliwal, Bharat Paliwal and other members of Vishwa Hindu Parishad arrived at the scene and registered their protest against the way police has been dealing with spurt in incidents of stabbings and other crimes.

After the tension, heavy police force has been deployed near religious places of the area. Also, several groups have formed to expedite the search of the accused. Likely locations were also under surveillance but the accused were not found till late night.

Rajsamand in Rajasthan was on the lip of every left-liberal in the country after the murder of a Bengali Muslim laborer by Shambhu Lal Regar who was upset at the repeated disappearance of a Hindu girl from the area who was twice taken to Malda, West Bengal by migrant laborers.

Shambhu was held up as an example of ‘Hindu extremism’ and everyone from the Bengal CM to Lutyens’ top intellectuals weighed in over the matter to express concern at the ‘rising intolerance and Islamophobia’ which they claim has gripped the country since May 2014..

Now that Rajsamand has witnessed a brutal attack by Muslims on one of the most deprived communities – scheduled tribes i.e. Dalits – the same cabal of self-proclaimed thought leaders has not uttered a word in commiseration with Prakash Bheel and his family. As if by magic, Prakash has transformed into a member of the majority community, and thus any attack by the ‘Muslim minority’ must be swept under the carpet to maintain the narrative of Muslim victimhood.