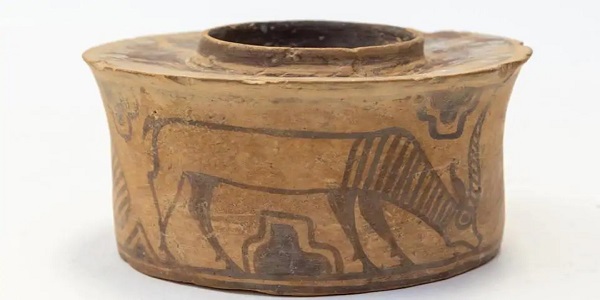 Loot and neglect of priceless Bharatiya heritage is one of the tragic realities of modern times. There are many such priceless items at British museums, or with the British royal family, and in homes of those who served during the ‘Raj’.

But one Briton who bought a pottery jar, for less than £4, later found that the artefact’s antiquity dates back to the Sindhu-Saraswati Valley Civilisation, making it around 4,000 years old, as per a report in Hindustan Times. Karl Martin bought the jar at a car-boot sale with another pot for £4, and was told of its antiquity by a colleague at the local auctioneers, Hansons. The jar with a painting of an antelope was put for auction this week, selling for £80.

A keen collector, Martin said: “I liked it straight away. I used it in the bathroom to store my toothpaste and toothbrush – it even ended up getting a few toothpaste marks on it. I suspected it might be very old but forgot all about it”.

“Then, one day at work, I was helping Hansons’ antiquities expert James Brenchley unload a van and noticed some pottery which was similar to my toothbrush pot. The painting style looked the same and it had similar crudely-painted animal figures”.

“I rescued the pot from my bathroom and asked him to examine it for me. He confirmed it was a genuine antiquity from Afghanistan and dated back to 1900 BCE. That means it’s around 4,000 years old – made 2,000 years before Christ was born. It’s amazing, really. How it ended up at a South Derbyshire car-boot sale, I’ll never know”.

Brenchley said: “This is an Indus Valley-Harappan civilisation pottery jar dating back to 1900 BCE. This was a Bronze Age civilisation mainly in the north western regions of South Asia. The civilisation was primarily located in modern-day Bharat and Pakistan as well as Afghanistan.”

“I do come across items like this from time to time and was familiar with the painting technique. It was probably brought back to the UK years ago by wealthy travellers.”

This physical heritage is not the only thing which we in Bharat have lost and become apathetic towards – we even lack basic knowledge of our ancient civilization which was developed and nurtured by our own ancestors. The heartening thing though is that in recent years there have been some major excavations and discoveries that are throwing new light and challenging long-held Western interpretations of our history. Chief among them is the Rakhigarhi site of present day Haryana. The sooner all these new discoveries make it to our educational syllabus, the better.