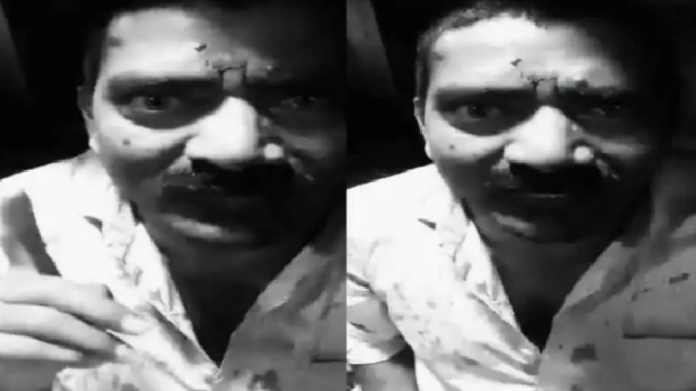 A veteran soldier was thrashed aboard the Swarna Jayanti Express, which was headed from Delhi to Visakhapatnam on Sunday. The ex-serviceman was reportedly attacked after he sat down to protest by reciting Mantras in opposition to Namaz being performed aboard the train. The injured ex-soldier was admitted to the hospital after the incident.

The train’s pantry car manager and other staff members are accused of the assault. A case has been filed in this respect at Madhya Pradesh’s GRP police station. The incident occurred on Sunday, November 20, 2022.

According to a report by Dainik Bhaskar, ex-serviceman Vilas Naik was assaulted on the train by the pantry car staff. Naik was chanting Mantras in protest of the Namaz being performed onboard the train which was impeding passenger movement. “On Sunday, a group of individuals sat in the train aisle to offer Namaz. This was repeated three times. When I requested a way to use the toilet, I was turned back” Naik told Dainik Bhaskar.

In a video that has now gone viral, Naik is seen narrating that the Muslim co-passengers had obstructed the passageway to toilets on both sides for Namaz and the Namaz on the common passageway was done 3 times before he decided to object. He added that he had to go to the toilet earlier too, but had to wait because the Muslim co-passengers were unwilling to let anyone pass during Namaz.

On the day of the incident, the ex-soldier was travelling from Delhi’s Hazrat Nizamuddin to Visakhapatnam. Some Muslims were also on board train number 12804 in the same coach. Naik reportedly asked for the passageway to not be obstructed as he had to go to the toilet. However, the persons offering Namaz asked him to wait till the Namaz was over.

In response, he began reciting Mantras in protest. Meanwhile, the pantry staff arrived and asked Naik to move and not obstruct the passage. They began arguing with Naik when he questioned why chanting could not be done while Namaz could be read. Harvesh Singh, the pantry manager, then summoned his employees and assaulted Naik, as per Naik’s complaint.

The pantry manager has reportedly said that Naik injured himself. Muzakir Ahmed, who was travelling aboard the train, on the other hand, admitted to performing Namaz. He stated that Naik insisted on using the restroom when Namaz was being offered.

They were all dropped off at the GRP outpost of Betul station in Madhya Pradesh. According to the outpost in-charge NS Thakur, an FIR has been registered against the manager of the pantry car and his coworkers under sections 294, 322, and 34 of the IPC.

The Railway Protection Force’s Senior Divisional Security Commissioner, Nagpur Division, acknowledged the incident in a press release. The train was delayed for around 18 minutes at Betul railway station. A case has been filed against the pantry car manager and his two vendors based on Naik’s accusation and the matter is being further investigated, according to the press release.

(The story was published on opindia.com on November 22, 2022 and has been reproduced here.)