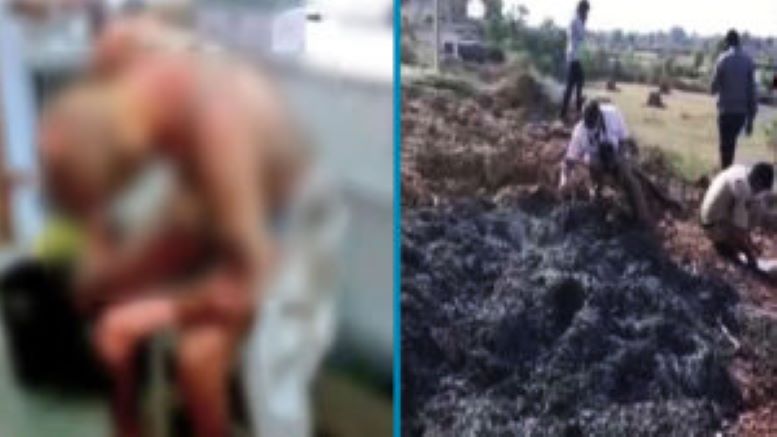 A temple priest who was set afire by five people in Karauli’s Sapotra police jurisdiction, Rajasthan over an alleged property dispute has succumbed to his injuries. As per reports, the incident took place on Wednesday morning and 55-year-old Babulal Vaishnav, the priest of Radha Gopal Temple, died in Jaipur on Thursday night.

The incident took place in Bukna village where the accused were supposedly attempting to unlawfully grab the 15 bighas of temple land on which Babulal had been farming. On Wednesday morning, Kailash Meena accompanied by four others arrived at Babulal’s residence at around 10 in the morning and an argument broke out between the two parties.

Following the argument, Meena is said to have thrown petrol on the priest and set him on fire. The priest was then sent to Jaipur’s SMS Hospital in a critical condition where he breathed his last on Thursday night.

It has also been learned that the dispute between Meena and Vaishnav with regard to the land had reached the Panchayat which had restrained Meena from troubling the priest and allowed the latter to continue possession of the land.

The death of the priest has angered Hindus across the state who staged protests throughout the state. Furthermore, it has come to light that a case of murder has been registered against Kailash Meena and four others under IPC Section 302 based on the dying declaration of the priest.

While Meena has been taken into custody, the police are searching for the rest who are said to be absconding. Considering the seriousness of the issue, the SP has constituted teams to nab the absconding accused. The PTI quoted Karauli SP Mridul Kachchawa as saying that two accused have been rounded up and are being questioned. The priest’s family refused to cremate him and only relented once the govt. agreed to their demands by announcing Rs. 10 lakh compensation, a contractual job for a dependent and a house under Indira Awas Yojna, besides removal of a local revenue officer and an SHO.

While the compensation might sound reasonable, let’s remember that Samajwadi govt in UP had in 2015 announced compensation of Rs 45 lakh and 4 flats in Noida to the family of Mohammed Akhlaq who was lynched for stealing & butchering a calf.

In the meanwhile, the so-called ‘janeudhari Brahmin’ (Brahmin wearing the sacred thread) Rahul Gandhi and his sister Priyanka Robert Vadra are missing in action. They seemed to be least bothered about pulling up Ashok Gehlot for the rising crime graph in the state.

Social Media (SM) users have been running a trend “Justice for Babulal Pujari” in the hope of drawing the attention of the Congress leadership and the media which conveniently turns a blind eye to all crimes in non-BJP ruled states.

Twitterati has also stepped forward to help the poor bereaved family (wife, 4 daughters and a son of the murdered priest) by raising funds to help them after the loss of their sole bread-winner. The crowd-funding initiative started by BJP leader Kapil Mishra’s team had raised around 28 lakhs at the time of publishing.

I just contributed my bit for 50 yr old Babulal Vaishnav, a temple priest, was burnt to death after he resisted the encroachment of temple land. He was survived by wife, 4 daughters and a son. You can make a difference too. https://t.co/EMq9J8tGye

Lutyens’ media and activists should know that “all lives matter” and if justice is what the Nehru family siblings are really bothered about, then they must begin by putting their own house in order.

A few minor accidents in Delhi churches were blown up into a global narrative of ‘Christians and minorities under attack’ by the Church lobby, English-language media and their Western counterparts, with even respected figures like ex-IPS Julio Ribeiro lashing out at the Modi govt in a shocking display of baseless, communal rhetoric.

Brutal murders of Hindu priests & sadhus along with desecration, land grab & theft in temples are far more serious issues plaguing all parts of the country, than alleged crimes against minorities. Such incidents also reflect the current social reality that so-called ‘upper castes’ are just as vulnerable to criminals as anyone else.

“My gold and silk are sold. I’m made to wear impure silk”- Mandaikadu Devi reveals in Prashnam

In Congress-ruled Rajasthan Hindu temples cannot use loudspeakers while mosques can!