Maharashtra: Stone pelted on bus carrying board of Sambhajinagar at Vaijapur bus stop 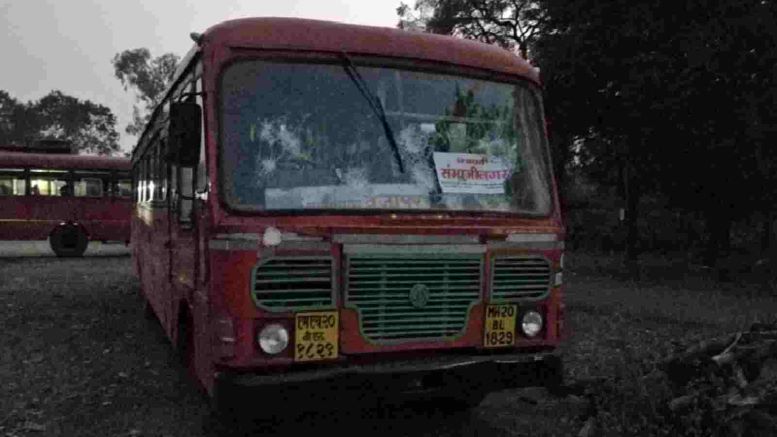 An unidentified miscreant pelted stones on an ST (State Transport) bus at the Vaijapur bus stop in Sambhajinagar (aka Aurangabad) with the board reading Sambhajinagar as against Aurangabad. The ST bus has been damaged in the process. The incident occurred yesterday evening and reports state that the police have registered a case against an unknown person. Further investigations are ongoing.

It must be mentioned here that the Aurangabad-Sambhajinagar dispute has been raging for quite some time now in Maharashtra with disagreements emerging regarding renaming Aurangabad as Sambhajinagar among the coalition partners of Maharashtra’s ruling MVA (Maha Vikas Aghadi) government. While Uddhav Thackeray-led Shiv Sena wants to rename the city as Sambhajinagar, coalition partners Congress and NCP are against the move due to vote-bank considerations.

In early January the officers and staff at Sambhajinagar’s central bus stand were caught in a fix when their attention was drawn towards stickers of ‘Chhatrapati Sambhajinagar’ that were affixed on the front of an ordinary and two luxury buses at the bus stand. Due to the possibility of a controversy emerging over both the sticking and/or removal of the stickers the staff was instructed to handle the issue with caution and the administration was also taking appropriate precautions in this regard.

One can’t be sure whether Shiv Sena wants to rename Aurangabad as Sambhajinagar due to the upcoming local body elections in the city. It did, however, take a dig at its alliance partner Congress as well as AIMIM Chief Owaisi whose party member is the MP from Aurangabad.

The Sena has time and again reiterated that Aurangabad will always remain Sambhajinagar for the party with even the CMO using Sambhajinagar not once but twice while referring to the city although the government continues to use the name Aurangabad in its official communications, press releases, documents, and records. Despite assurances, Sena is yet to officially rename Aurangabad as Sambhajinagar, even as coalition partner Congress is opposed to the move.

The minority vote-bank considerations of both NCP and Congress are so high that NCP MP and actor Amol Kolhe who had played the role of Chhatrapati Sambhaji Maharaj in the Marathi serial Swarajyarakshak Sambhaji was also opposed to renaming the city as Sambhajinagar.

The renaming of Aurangabad to Sambhajinagar has been a longstanding demand of the Shiv Sena. The demand was first made in the late 80s when the party captured power in the local body elections at Aurangabad. Then Shiv Sena Supremo Bal Thackeray made the announcement of renaming the city Sambhajinagar during the victory rally on 8 May 1988.

Sena mouthpiece Saamna has been referring to the city as Sambhajinagar following the announcement of its then Supremo Bal Thackeray. It must also be mentioned here that the Aurangabad Municipal Corporation had passed a resolution in 1995 to rename the city as Aurangabad.

It was then Congress Corporator Mushtaq Ahmed who is now the NCP who had approached the high court against the notification renaming Aurangabad as Sambhajinagar issued by Shiv Sena CM Manohar Joshi. When the high court dismissed his challenge plea, he obtained a stay on the decision from the apex court, and the status quo was maintained till the subsequent Congress-NCP government withdrew the notification after coming to power in 1999. It is pertinent to mention here that Ahmed has announced his decision to approach the courts again if any decision regarding renaming Aurangabad would be made.

It remains to be seen whether Aurangabad would actually be renamed Sambhajinagar or the demand would remain merely a political tool to extract votes using people’s sentiments while the city continues to bear the name of the Mughal tyrant who tortured Chhatrapati Sambhaji Maharaj, the second Maratha Chhatrapati, to death.