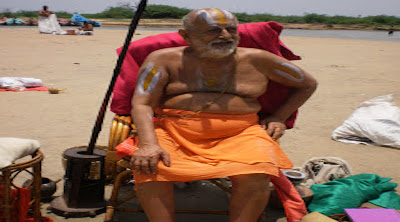 Sri Ranga Ramanuja Maha Desikan, the pontiff of Srirangam Srimath Andavan Ashramam, attianed the feet of acharyas yesterday noon at Chennai. As he experienced marginal discomfort after the completion of his daily worship and rites, he was taken to a private hospital in Chennai where he attained Vaikuntha following a heart attack. He was 83 years old and a great scholar.

HH Srimad Andavar has attained Mukthi. HH was a great supporter of cows and was personally supportive to me in cattle protection. Most revered scholar in Sanskrit & Tamil. A great loss to Hindus and Sri Vaishnavas in particular. pic.twitter.com/Xx3GuqCHxw

The acharya was born on 20 May 1935, at Srimushnam in Tamil Nadu to Sangeetha Kalanidhi Srinivasachariyar and Kumudavalli as Varahan. Varahan commenced to exhibit his extraordinary intelligence at a very young age and started his veda adhyayana in  Madurantakam Sanskrit College of the Ahobila Matha. After consummating his education there, he went to the Sanskrit Pathashala run by Shri Kakumani Adhikesavulu Chetti trust at Sowcarpet in Chennai for his initial education in Shastras.

In his quest to learn more about Samanya shastras, he went to Sriperumbudur and learnt completely the Nyaaya and Tarka shastras. He also emerged successful in the Nyaya Siromani Paribhaasha.  After this, he started working as a Sanskrit teacher in Andhra Pradesh. During his time there he also learnt and became proficient in Telugu literature. He then returned to Sriperumbudur and passed the Tamil Vidwan final exam as a result of which he became a Tamil teacher in the Jilla Board School at Chengalpattu and worked as such for 27 years.

He got married in 1960 and blessed with five sons and two daughters. An extraordinary scholar in vedas and Divya Prabandhas, he was also an expert in Carnatic music, Tarka, Shilpa shastras, Astrology and Ayurveda. Apart from this, he was also proficient in a number of languages like Hindi, English etc., He lived in Malyangulam for many years and settled down at Velamur, where he renovated and maintained an old abandoned temple by himself.

On 1st June 1989, he gave up his family life and took up sanyasa as Ranga Ramanuja Maha Desikan to become the 11th peethadhipati of Srimath Andavan Ashramam accepting the request of the followers of the matha when the two previous pontiffs of the matha attained vaikuntha unexpectedly within a short period of two months.

After taking up sanyasa, he initiated efforts to spread the prapatti marga of Ramanujacharya and Vedanta Desika and performed panchasamskara (vaishnava deeksha) to thousands of Hindus. He established several veda pathashalas to protect and nurture the dying Vedic education. The acharya withal commenced to provide training in Agama shastras at the srirangam pathashala of the matha to forfend the traditional method of ritualistic worship in temples. Furthermore, the acharya also set up a number of goshalas for the upkeep and maintenance of thousands of homeless and stranded cows. Despite of philosophical differences, the acharya also shared a good friendship with Acharya Sri Jayendra Saraswati of Kanchi Kamakoti Peetham and worked with him for the protection of Hindu dharma.

Two greatest Yogis heading two tallest spiritual institutions squatting on floor engrossed in discussion. Look at their simplicity. Both keeping their sacred dandam with themselves exchanging due respects 4 each other working for a common cause i.e #Sanatanadharmaparipalanam pic.twitter.com/im5eAXlcon

After bringing various reforms and setting up new pathashalas to protect the dying traditional vedic education, the Acharya also set up the Srimad Andavan Arts and Science College in Tiruchirappalli to provide low cost education to the poor and deprived sections of the Hindu society. The college which offers low cost and high quality education was inaugurated on 26th October 1996, by the then President of India Dr. Shankar Dayal Sharma. The college currently has more than 4000 students.

In order to propagate Hindu dharma in the west, the acharya established a branch of Matha in New Jersey through his disciples. He also sent murtis of Sri Ramanujacharya and Sri Rukmini Satyabhama sameta Venugopalaswamy for special worship at the houses of devotees. Furthermore, he also started the process of feeding poor Hindus and devotees at different temple towns of Bharat. The acharya also created separate corpus funds through which gold for mangalsutra is provided to poor Hindus by the Matha and emoluments are provided for the poor scholars of scriptures along with life insurance for them and their family members.

The acharya’s tenure as a sanyasi will always be remembered for the services he rendered to protect the vedic education and reform the modern education system to provide low cost and high quality education. His efforts to protect and propagate Hindu dharma in Bharat and other countries as a sanyasi will always be looked upon as an inspiration by many. The brindavana pravesha of the acharya was performed today in Srirangam, adjacent to the brindavana of his beloved guru and 9th pontiff of Srirangam Srimath Andavan Ashramam, Sri Thirukundanthai Andavan.