#ProtectWithPen – Ink to wipe off blood, power of pen to swipe off sword!

To enlighten and demand from our rulers, the implementation of complete ban on cow slaughter, Jagadguru Shankaracharya Sri Sri Raghaveshwara Bharathi Swamiji of Ramachandrapura Matha has launched a campaign recently #ProtectWithPen / #Abhayakshara. 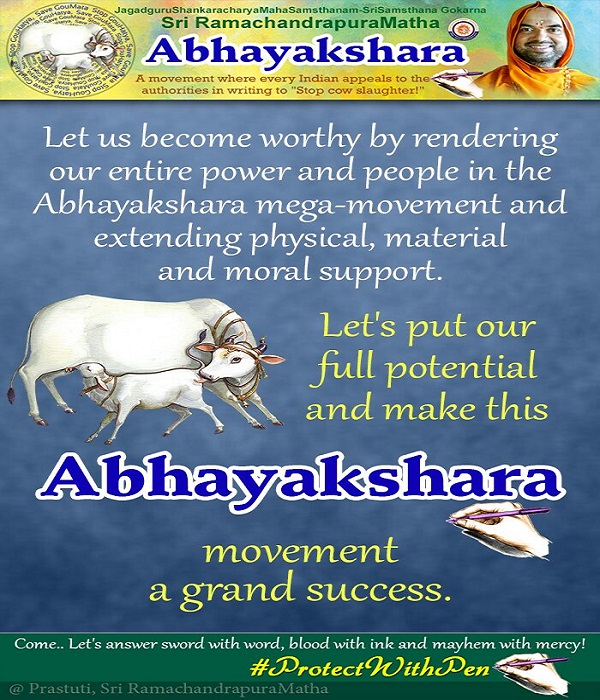 Slaughter. Not just this, the campaign’s main objective is to bring awareness among individuals about the importance of indigenous cows, its products and also the harmful effects of beef/ cow slaughtering. This is being achieved through explaining seven sacred steps.

Sri Swamiji has directed the below seven steps, following at least one or more will contribute for cow protection. And such people are called Gou Kinkara and entitled for Gou Deekshe : The initial ground campaign has started in Bengaluru and we have already collected 3 lakh signatures. Volunteers are reaching out door to door, explaining the above steps and getting signature from every person they come across. They are doing campaign in temples, parks, metro stations and other public places. Ground campaign shall spread to other districts of Karnataka from Shri Krishna Janmashtami and then across the nation.

More than 90% of bhartiyas are in favor of cow protection, but the voice of the 5% pseudo-secular are heard at large because this 90% of voice is not recorded and consolidated! #ProtectWithPen shall record the voice of each individual who wants to protect indigenous cows and put it in front of our governments in state and center. Our target is to collect 5 crore signatures from Karnataka whose population is around 6.5 crores, and the same number applies for every other state with respect to its population.

While volunteers approach people face to face, its our responsibility to create awareness across the nation about benefits of cows and harmful effects of slaughtering. We need to empower the common man to be able to accept and articulate the economical, spiritual, environmental and health benefits of cows to mankind.

Members of #GiveUpAMeal team, who organized the ‘Most effective online campaign for social cause’, which saved around 30,000 desi cows from death, due to drought and hunger at MM Hills, are managing this #ProtectWithPen online campaign under the holy guidance of Sri Swamiji. This volunteer team goes on a weekly campaign with unique Social Media strategy to reach masses. Using Twitter, Facebook, Whats App social media tools, team aims to reach crores of people and spread the benefits of Gou mata. Team has a dedicated FB page for this campaign where regular updates are provided regarding ground campaign, practical experiences and related information. This Social Media campaign plans to reach every part of the nation.

Imagine crores and crores of signed petitions, along with crores of social media messages via tweets and posts to our government demanding complete ban the cow slaughter, that makes it inevitable for a favorable decision to be taken.

Every year in the Hindu month of Shravana, at Andiyur in Erode district of Tamil Nadu, close to Karnataka border, Aadi fest is celebrated where the farmers from across the border sell their cows which they feel are excess for them. They do it as they need to meet both the ends. Lately this fare is being controlled by slaughterers. Most of the cows reach slaughter houses and eventually they will be killed brutally. But for the first time in the history, HH Raghaveshwara Sri is hosting Abhaya festival as a counter to this Aadi fest. No slaughterers are allowed to enter , rather only genuine cow lovers and farmers allowed to purchase the cows after certain undertakings. We can involve in and support this #AbhayaFestival by different means. We can visit the fare and purchase the cows and take home or we purchase and hand over it to Matha which will take care of our cows. We can identify people who can purchase gou, rather we should see potential people and convince them to buy cow/cows and connect them with #GouSanjivini officials.
Thus Swamiji has determined that no cows from Karnataka farmers will reach the slaughterers through Aadi fest this time. 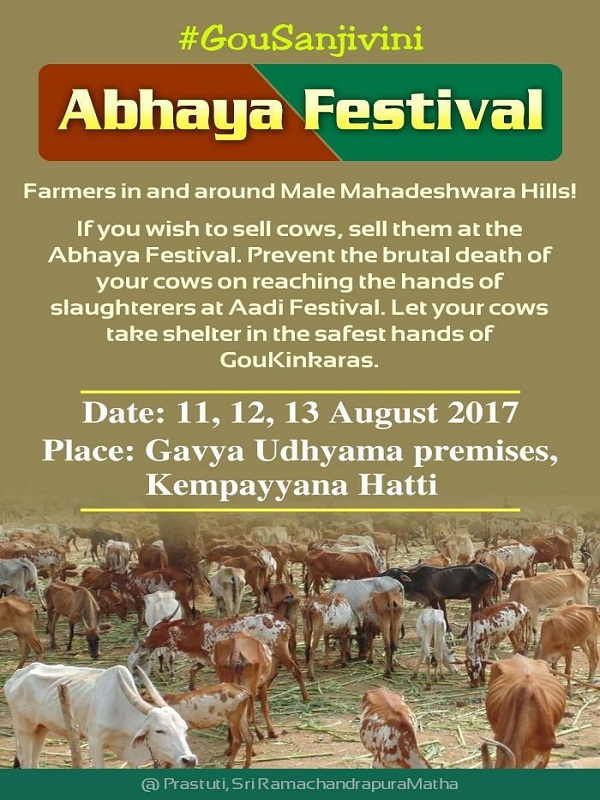