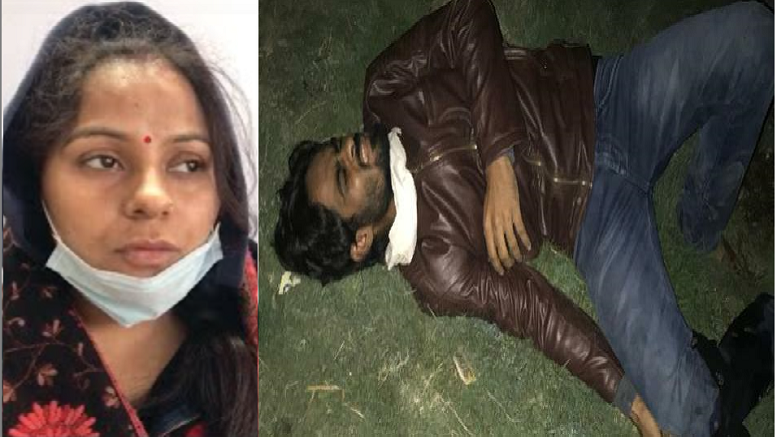 A shocking case of armed robbery has come to light in Ghaziabad. The robbery led to brutal murder of a 29-year-old woman and a 17-year-old girl. The three children were tortured by the perpetrators with a knife, a grinding stone and a screwdriver to compel the mother to give up location of valuables. The most shocking detail is that the robbers were known of the victims since many years, and the children called the women Uma as “Amma” and her  boyfriend Sonu Ali as “tailor uncle”!

The incident happened in the Masuri area of Ghaziabad on Saturday evening and the accused fled after looting valuables and cash worth Rs. 6 lakh. The chilling details of the crime were revealed by the perpetrators to the police themselves and corroborated by the children’s statements.

The YouTube video above, by NBT, shows the accused woman narrating the crime details and the SSP Ghaziabad, Kalanidhi Naithani giving other details of the crime. The SSP told that Uma, and her boyfriend Sonu Ali, son of Liyaqat Ali, were known to the victims’ family. Uma was from the same village as the victims and was a distant relative.

On Saturday evening, the accused visited house of the victim Dolly and she served them tea. The house is under Masuri police station in Ghaziabad. Uma had learnt that the family of Dolly had recently sold some property and kept the cash at home. At the time accused visited the house, Dolly’s husband and father-in-law were not at home. In fact, the accused had done a reconnaissance of the house and ascertained the time there usually was no male in the house.

The three children of Dolly, five year old Rudra, seven year old Meenakshi, and ten year old Gauri, were there and taking tuition from a girl named Anshu. A student in class 9, Anshu stayed in the same house along with her family, as a tenant.

The accused soon locked all the five persons in a room on the gunpoint. and bolted the entry gate from inside. After searching, when they could not find any valuables, the horror started. Sonu Ali first asked Dolly the location of the valuables and on being refused, shot Anshu dead. Then he also fired at Dolly, who lost consciousness for some time. Then Ali brought a knife, grinding stone and screwdriver from the kitchen and stabbed Dolly at several places as also hit her with the grinding stone. Uma was complicit in the whole crime as she kept watch and kept asking the women about cash and valuables.

To compel Dolly, they hit the seven year old Meenakshi with the grinding stone and also threatened to slit the throat of Gauri. To save the children, Dolly ultimately told them the location of valuables. However, as the loot was less then expected, Ali smashed the face of Dolly with the grinding stone. As the children came to save their mother, he also slit the throats of Gauri and Rudra!

As the father in law, Lokman Singh returned, he was shocked to see the condition of the children and took all of them to hospital with help of neighbours. Dolly and Anshu were declared dead on arrival, while the three other children continue to be under treatment. It is being reported that Meenakshi is in critical condition, while the other two are reported stable.

According to reports, it was Gauri who led the cops to the accused. “Uma amma aayi thi tailor uncle ke saath aur sabko mar diya (Uma aunty had come with tailor uncle and killed everyone),” she told the police. The police immediately reached hospital and started their investigation. Uma was arrested from her house and the looted jewellery was also recovered. Ali was trying to flee the city and was arrested on the Dasna flyover on the early morning of Sunday. He fired on the police and in return fire, he got a bullet in his leg.

According to reports, Uma is married to one Harish and has children with him, while Sonu Ali was her lover. They had planned to kill all the five persons so that there is no evidence against them. However, the revolver used in the crime broke down and the children, whom they had left for dead, survived.