How Pakistani propagandists tried to spin the terrorist attack from mosque in Sopore, Kashmir On 1 July, Islamic terrorists launched a desperate attack on a CRPF checkpoint. A soldier Deepchand Verma was martyred and a civilian also died in cross-fire from indiscriminate firing from a local mosque. Three other soldiers were injured as well. Security forces rushed in to save the three-year-old grandson of the deceased civilian and swiftly saved him and reunited him with his family. A combing operation was carried out in the area to nab the terrorists.

The 39-year-old martyred soldier Deepchand belonged to Sikar, Rajasthan and he was a head constable in CRPF’s 179 battalion. Coming from a poor background, his mother still works as a labourer in village as his father had died three years back.

Speaking on the incident, Kashmir IG Vijay Kumar said “Terrorists fired from a Masjid on CRPF party in Sopore, resulting in deaths of a Jawan, a civilian and injuries to three personnel. Terrorists misused Masjids in two operations in the last one month. I request Masjid committees to not let terrorists use religious places.”

In the press brief, he apprised media of facts about the incident.  He said that two Lashkar-e-Taiba (LeT) terrorists, one Usman from Pakistan and one local, attacked a troop of soldiers of 179 Battalion as they were alighting from a vehicle at Model Town, Sopore at 0730hrs. There were causalities on CRPF side with one soldier martyred and three injured. A 65-year-old civilian by name of Bashir Ahmed Khan of Mustafa colony of HMT Srinagar also died when he ran out of his car with his granchild while terrorists were firing at troops. IG Kumar expressed his concern on the misuse of a mosque by terrorists in the cowardly attack. The security forces had to be very discreet in counter operation as the terrorists were holed up in a sensitive location.

Elaborating on the success of security forces (SF), he said that in the last 6 months, 118 terrorists including 107 local and 11 foreign terrorists have been killed by SF. Of the total 118 terrorists, 57 terrorists were of Hizbul Mujahideen terrorist outfit, 22 from Lashkar-e-Taiba (LeT, Pakistani outfit), 7 Islamic State of Jammu Kashmir (ISJK, a branch of IS network), 7 Ansar-Gazwa-tul-Hind (Al Qaeda affiliate) and one from Al-Badar outfit.

After the pictures of the incident went viral, there was a huge wave of sympathy for the little boy who survived the shootout.

The visuals of a child trying to ‘wake’ his dead grandfather by sitting on top of him while bullets were flying all around him made netizens’ eyes wet. The people in & outside Kashmir unequivocally condemned the needless violence in the valley. While most citizens thanked the security forces for successfully saving the child and reuniting him with the family with utmost care as was possible during an armed operation, the Pakistani and pro-Pakistani segments in valley sought to build a narrative of false propaganda regarding the incident.

They alleged that security forces ‘pulled out the civilian from his car and shot him point blank’. Sadly, some Indian news outlets also got lured into spreading the same propaganda. But such conspiracy theories are not new in Kashmir. This tweet by a J&K police officer shows how even family members of victims are pressurized to blame security forces for deaths of their near and dear ones in terror attacks. 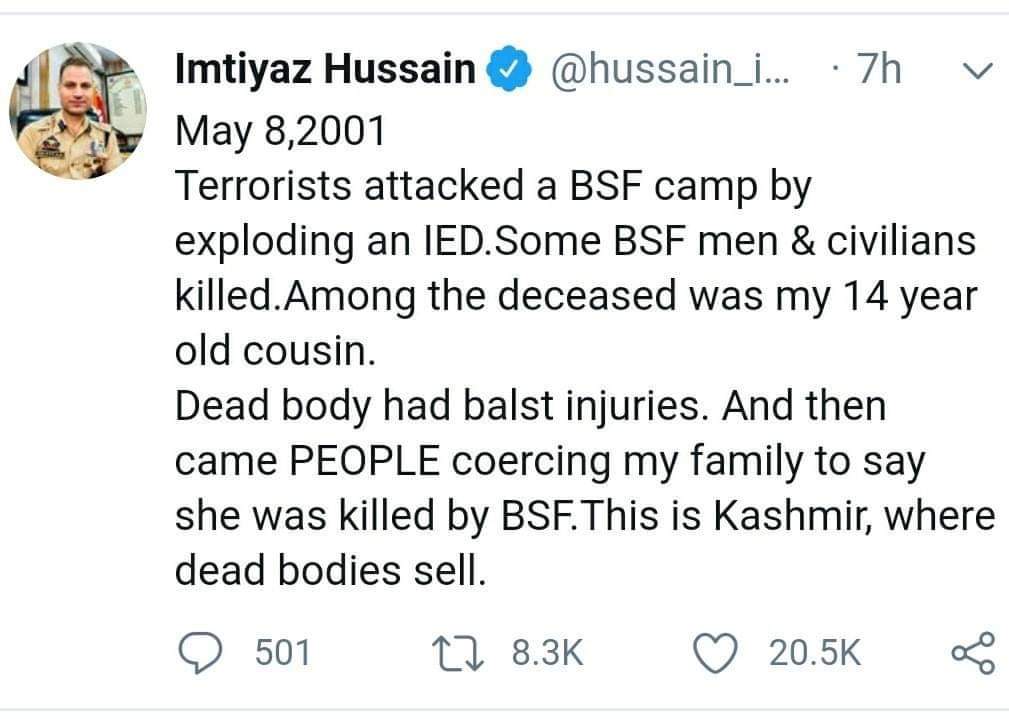 Notwithstanding the highly illogical basis of the pro-Pakistan camp’s statement, they maligned the security forces without a shred of evidence to substantiate their claim. Anyone familiar with MO (modus operandi) of Bharatiya security forces knows how they safeguard lives of ordinary Kashmiri civilians while risking their own lives during CASOs (Cordon & Search Operations).

Even after ‘establishing contact’ with terrorists, the security forces spend hours and hours in removing civilians from the area, and if the terrorists have taken any civilization hostage, security forces negotiate with them with help of JK police so that no innocent life is lost. The martyrdom of 5 security personnel, including two Army officers, in exactly such a ‘hostage’ situation in Handwara in May is testament to the extremes our forces go in safeguarding civilian life, even though they are often attacked by radical stone-pelting civilians while an operation is going on.

But all this is lost on the Pakistani propaganda machinery that wants to instill radicalization in Kashmiri masses and launch psychological warfare against emotionally susceptible victims of terrorist violence. In the Sopore case as well, even before chain of events could be established with proper investigation, the psyops teams based in Pakistan launched a malicious online attack on Bharat’s forces. One of their ‘chats’ was intercepted by Bharatiya netizens in which a ‘team leader’ is seen exhorting his minions to use the pictures and videos of the incident and put the blame of civilian casualty on CRPF. Here is a screenshot of the intercepted Facebook chat –

They claim that “Indian Forces pulled out Bashir from his car and shot at him from point blank range, killing him on the spot”. This claim is being repeated constantly without any evidence or eye witness testimony. The first and foremost counter-question that should be asked of them is why would Bharatiya SF shoot an elderly civilian traveling with his grandson while there are terrorists shooting at them. How will it benefit anyone, let alone ambushed security forces at that moment? Secondly, the pictures show how SF personnel secured the area and rescued the child in a live operation quite clearly.

If we look at pictures of the incident with an objective mind, we can easily point out falsehood in Pakistani narratives around the incident.

In Picture 1, The victim Bashir can be seen lying on road after being shot. When the location of the shooter is not known, CSI (Crime Scene Investigation) experts figure out the location of the shooter from the way the body is lying. Generally, the impact of a bullet makes the shot person fall away from point of shooting. The victim’s head is away from the shooter while the feet are towards him. In Pic 1, you can see that the bullet was probably shot from direction A. In Pic 2, we see a trooper arrive from direction C which is opposite of direction A. If you notice the stance of trooper, he is still in active combat mode, crouching and holding his gun in both hands while taking cover, which indicates that the shootout was still ongoing at this point of time. 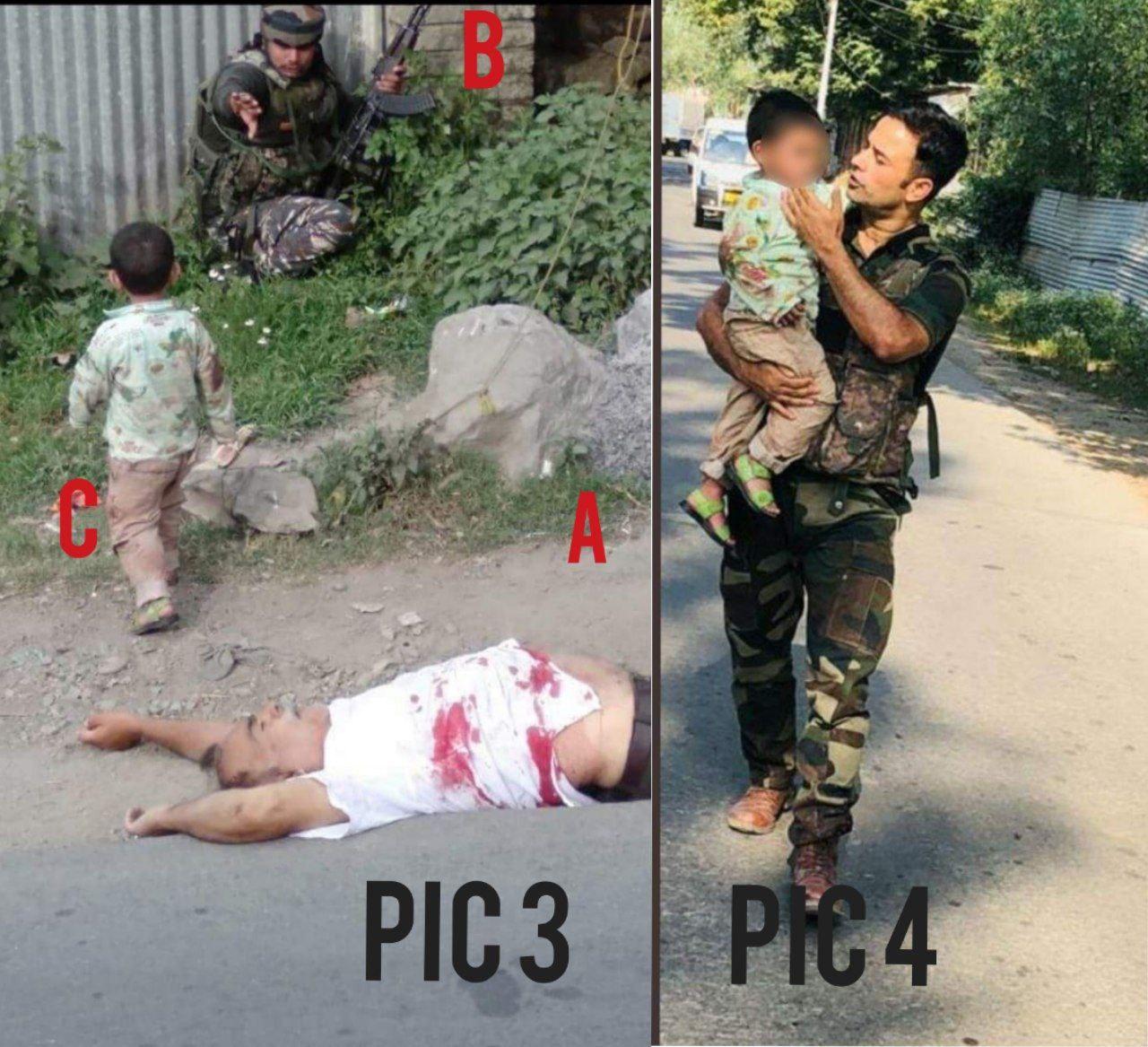 In Pic 3, the trooper having reached by side of child, calls him to himself. Since the shooting is still going on, he did not go to pick up the child as that would jeopardize safety of the child. The terrorist noticing trooper in exposed position would shoot at him and the child could be accidentally shot. So he gets the child to come to him. Some Pakistani handles are adding a shameful narrative that in Pic 3, ‘child has picked up a stone to hit the soldier(sic)’. There is no stone in his hand.

In Pic 4, the child finally safe, is being consoled by JK police SHO (Sopore) Azim Khan who was interviewed by Republic TV and gave a detailed account of the incident. He narrated that in the Sopore combat, their biggest challenge was to save the child from harm, and how soldiers risked their own life while saving the child who was in an exposed position on the road.

It is high time Pakistan and their propaganda machinery learn to respect the dead and stop playing their manipulative games over corpses of innocent Kashmiris. 30 years of Islamic radicalization has resulted in thousands of deaths and it should end at some point, sooner the better.