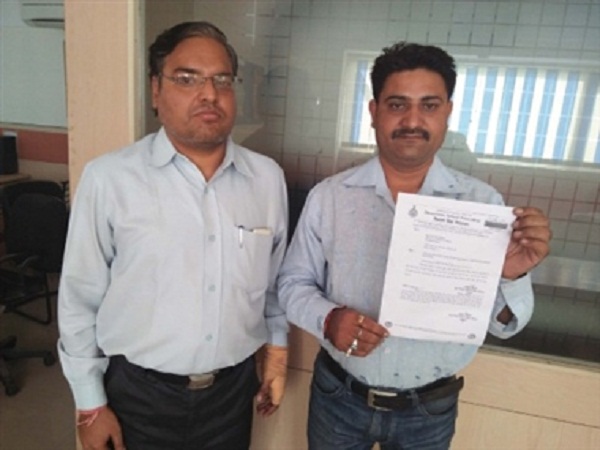 In a previous article, we had highlighted the allegations of ‘frequent & excessive fee hike and encouraging religious conversion’ on St. Thomas school in Jagadhri, Haryana. These allegations have been made by the parents of some children studying in this school. In that report, we had mentioned that some students were told to convert to Christianity if they wanted a few waiver.

Following up on the news, we have traced the reports on this issue in local Hindi media as the school was not willing to talk about it at all. More shocking facts have emerged which seem to point to the covert attempts of St. Thomas school in aiding religious conversions to Christianity. Here is the complete clip of the news in a local news magazine called ‘Mhara Desh Mhari Maati’ : Partial clip of this news has already been covered in our previous report, the complete clip presented now points at 2 main reasons for the agitation by parents to begin with – too frequent increase in school fee followed by school’s attempts to convert students for fee waiver and school management making the students remove rakhis (thread tied by sisters on the wrist of brothers on the Hindu festival of Rakshabandhan) from their wrists.

The parents have been grossly offended and sitting on a Dharna for more than 120 days now, and have been approaching various options for getting information and seeking justice like RTI, CM window etc. Popular Hindi media portals have been reporting on this case to certain extent. As per this recent report by Jagran, the complaint by parents to the relevant government offices have come with a reply that Director of Secondary Education is considering sending a Show Cause Notice to the school over its affiliation. It seems that the school is not in a mood to explain in detail regarding this issue and is still pressurizing parents to deposit the increased fee. Quoting a part of this news report :

Translating the above in English :

“Increase in fee, not providing facilities to children in school, pressurizing to deposit increased fee in spite of stay etc issues have led the parents to continue the Dharna in front of the school since a long time (July 2016). Parents and complainants Sandeep Duggal, Amit Bhatia, Gautam Garg, Sanjeev Mehta, Mukesh Dabra, Chandra Mani, Surendra Mohan, Virendra Mittal etc have alleged that the school has to deposit Form 6 regarding fee increase for next year by January 1, which the school did not deposit in time. Only after many Show Cause notices by district education department, did the school deposit it in May. Whereas going by the Haryana Education Act, they could not have increased the fee if they did not deposit the form in time. In spite of this, the school has been charging increased fee and even now the school is pressurizing parents to deposit increased amount of fee. Parents are also alleging that the balance sheet submitted by school had many discrepancies and it was submitted for 6 months only.”

Dainik Bhaskar has also reported recently on this issue with same details.  The school appears to be fairly comfortable in defying legal formalities and obligations as much as possible, may be because it is connected to a very large influential christian organization CNI (Church of North India).

It seems that the school did respond to the initial allegation of aiding religious conversion and asking students to remove rakhis from their wrists, through a local paper called ‘Yamunanagar Kesari’. The town of Jagadhri falls in Yamunanagar district of Haryana. News clip of this local paper : Interestingly, the local district members of organization called ‘Swaraj Abhiyan’ have come out in support of St. Thomas School in Jagadhri. Now Swaraj Abhiyan is an organization floated by ex-AAP members Prashant Bhushan, Yogendra Yadav, Professor Anand Kumar of JNU etc. This is a very interesting fact, why would a socio-political Gandhian organization get involved in a tiff between parents and a school over fee increase and proselytizing allegations?

Though Prashant Bhushan has been applauded by many on his bold stances against corrupt judiciary, he remains loyal to the skewed secular cause, in the name of which he opposed the hanging of terrorist Ajmal Kasab and had asked for a plebiscite in Kashmir. The same is with Yogendra Yadav, who demonstrated very little knowledge of real history and partition of Bharat when he recently criticized Assam BJP’s proposed changes in granting citizenship to minority migrants from neighborhood countries on the pretext that why Ahmediyas and minorities from Nepal are not being equally favored as much as persecuted Hindus. Also hilarious to note that an organization formed on socialist principles where a founder member is a sociologist like Professor Anand Kumar (who called surgical strikes in PoK as ‘nationalistic jingoism’), is promoting capitalistic exploitation by an influential christian school.

It remains to be seen whether St. Thomas School is actually issued Show Cause Notice for violating process formalities and whether mainstream English media picks up this case with basic facts.