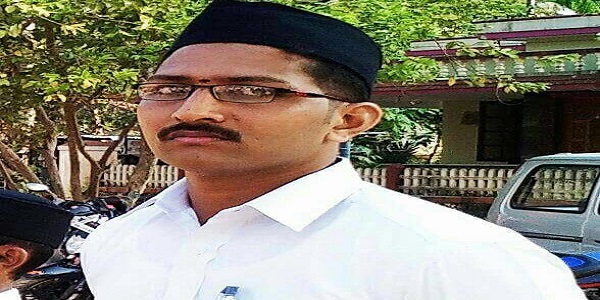 Sharath Madiwala, the RSS swayamsevak who was stabbed on Tuesday night by a group of ‘unidentified assailants’ at Bantwal near Manguluru, has died from his wounds.

1. We strongly condemn the brutal & cold blooded murder of RSS activist of Sri. Sharath Madiwala at BC Road, Mangaluru. pic.twitter.com/yBWru6Nhxs

A tweet by senior BJP leader and ex-CM BS Yedyurappa (BSY) says it all about the precarious law & order situation and threat to life faced by Hindu activists under the ‘secular’ Congress regime of Siddaramaiah.

Incidentally, BSY was constantly hauled over the coals by Lutyens’ media and Church-NGO-ex-judge ecosystem (also known as C-system, or Congress’ ecosystem) for alleged ‘attacks on Churches’ during his 3-year stint as Karnataka CM. Having identified BSY as a strong Hindu leader with grassroots support, this ecosystem used every trick in the book to destroy the man, finally having him removed as CM, with connivance of BJP’s weak central leadership at the time, on trumped-up corruption charges which paled into insignificance when compared to the mega-corruption unleashed by Sonia favorite YSR in neighboring Andhra.

The ‘Church under attack’ card is an old ploy used by the liberal-secular gang whenever BJP breaks new ground. It was used in 1998/99 against the ABV led NDA-1 (first ever BJP Government at centre), against BSY (first BJP Government in South Bharat) in 2008/09, and against Modi led NDA-2 (first full majority BJP Government at centre) in 2015. This ploy is guaranteed to attract international (read Western) attention and defame Bharat on the global stage, and induce self-loathing in middle-class Hindus for enabling Hindu fascism.

If Siddaramaiah had been subjected to even one-tenth of the scrutiny and grilling that BSY was, Sharath Madiwala, the only son of his aged parents, might have been alive today.

And while police investigations are still ongoing to apprehend the attackers, a Facebook group ‘Mangalore Muslims’ was openly celebrating this gory murder  –

For those who can't read kannada,Page posted "One wicket down at A J Hospital,When in Kalladka" in ref to the murder of RSS worker Sharath😡 pic.twitter.com/d2OzczNHCA

The ‘Mangalore Muslims’ Facebook group has also issued a death threat to a senior RSS leader Kalladka Prabhakar Bhat. The threatening post said “Kalladka Prabhakar Bhat is a terrorist. If he dies, will you honour him with Tri-colour flag or Saffron flag? Today is his last day… decide, (Sic)“

Around 2 weeks back, the Congress government came under fire when a video of forest minister B Ramanath Rai ordering Dakshina Kannada police to arrest Kalladka Prabhakar Bhat, went viral. During his interaction, Ramanath Rai reportedly said that Kalladka Prabhakar Bhat was not a “big leader”. “Older people will not cause any tension. I know everything about here. This is not Mandya but India. So you (SP) may not have the knowledge of the region.  Arrest Prabhakar Bhat, if need be and if he continues to make hate speeches slap Section 307 on him. He would not be able to come out of the jail,” Ramanath Rai had told the SP.