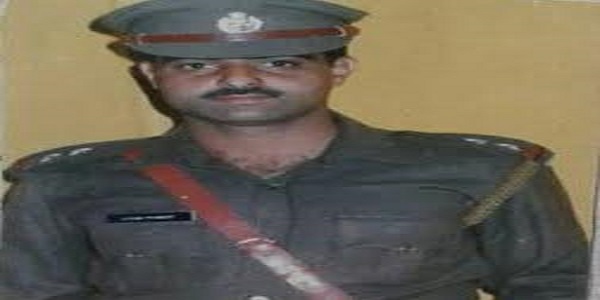 A Deputy Superintendent of the Jammu & Kashmir Police, Mohammed Ayub Pandith, was lynched by a mob outside the Jamia Masjid in Nowhatta area of Srinagar shortly after Thursday midnight, as the mob believed he was a Kashmiri Pandit, reports The Pioneer. This is for the first time a serving police officer has been lynched in full public view in the Kashmir valley.

While mourners gathered in a large number to pay tributes to their loved one, close relatives claimed Pandith was targeted by the attackers as they believed he was a Kashmiri Pandit. One of his sisters claimed attackers lynched him since he was carrying an identity card which had his name written as MA Pandit.

J&K Director General of Police SP Vaid said, “The DSP was posted at the access control of the mosque to prevent miscreants from vitiating the atmosphere so that people could offer prayers in peace. But a few among those, for the security of whom he had been deployed there, lynched him.”

“When he came out after checking, he was surrounded by some miscreants who started manhandling him and asking for his identification. Initial investigation revealed that there was an altercation and the officer fired to get away from the mob. He was, however, overpowered and killed near Bata Chowk in Nowhatta area,” Vaid said. The Indian Express has reported a slightly different version of events, based on information gathered from various sources –

Police reinforcements were rushed to the area to restore normalcy. As the officer was not in uniform, the police identified him after his family called his mobile phone, according to NDTV.

PTI quoting police sources said, “People tried to catch the man who allegedly fired several shots from his pistol, injuring three persons. The irate mob then caught hold of him and stripped him naked before stoning him to death.”

Police has arrested two people for the brutal lynching and one more has been identified.

After it emerged that Hurriyat leader Mirwaiz Umar Farooq was leading prayers inside the mosque whilst the DSP was being lynched outside, PDP MLA from Pattan raised a question on why Farooq did not intervene?

Some local journalists like @adil_lateef painted the lynched police officer as the instigator of the violence for firing at youth (the officer fired in self-defense), and protested the “character assassination of Kashmir youth.”

“As he failed to explain his  presence a group of youth caught him. As the arguments got into blows, he pulled a pistol from the holster and fired at the people, indiscriminately”

This insidious radicalization by Hurriyat and victimhood creating local media was called out by other Kashmiris.

This incident has again triggered calls for doing away with security cover of Hurriyat leaders like Mirwaiz Umar Farooq who spew venom against the same nation that funds their security and other expenses.

The shocking incident elicited some predictable reactions from Delhi’s liberal media. A journalist with Newslaundry jumped to the conclusion that Hindus were involved before realizing that the DSP was lynched by an Islamist mob. She quickly went on to play victim claiming without evidence that ‘Hindutva trolls’ abused her over the tweet.

Senior journalist and TOI columnist Sagarika Ghose arrived at the conclusion that the DSP’s lynching showed how ‘both state and mob violence’ were condemnable (implicitly equating the barbaric murder of DSP Ayub with the security forces’ action when countering stone-pelting mobs) and that the incident showed “Delhi must hasten to the talking table”. Ghose did not specify to whom she wanted Delhi to talk – hardline Islamist Hurriyat or its terror-sponsoring mentor Pakistan?

Dreadful mob lynching of DSP Ayub. NO place for violence of any kind–state or mob. Delhi must hasten to the talking table in J&K!

Such blatant double standards did not go unnoticed –

The radicalization of Kashmir by Islamists has today reached a stage that after expelling the kafirs (non-Muslim, i.e. Kashmiri Pandits) through an organized campaign of murder, rape and intimidation in 1989-90, the Islamists are now waging war on the ‘munafiq‘ – hypocrite or a group decried in the Quran as outward Muslims who were secretly unsympathetic to the Muslim cause.

Because of that, We decreed upon the Children of Israel that whoever kills a soul unless for a soul or for corruption [done] in the land – it is as if he had slain mankind entirely. And whoever saves one – it is as if he had saved mankind entirely. And our messengers had certainly come to them with clear proofs. Then indeed many of them, [even] after that, throughout the land, were transgressors.

Indeed, the penalty for those who wage war against Allah and His Messenger and strive upon earth [to cause] corruption is none but that they be killed or crucified or that their hands and feet be cut off from opposite sides or that they be exiled from the land. That is for them a disgrace in this world; and for them in the Hereafter is a great punishment

The fact that DSP Ayub was lynched by people from the same neighborhood where he stayed, also exposes those who claim that “Kashmiri Pandits are welcome to return to their homes that they were forced to abandon in 1989-90.” Kashmir today is more heavily Islamized than ever before, and a separate, well-guarded enclave to resettle Kashmiri Pandits is the only rational option in front of the Government.