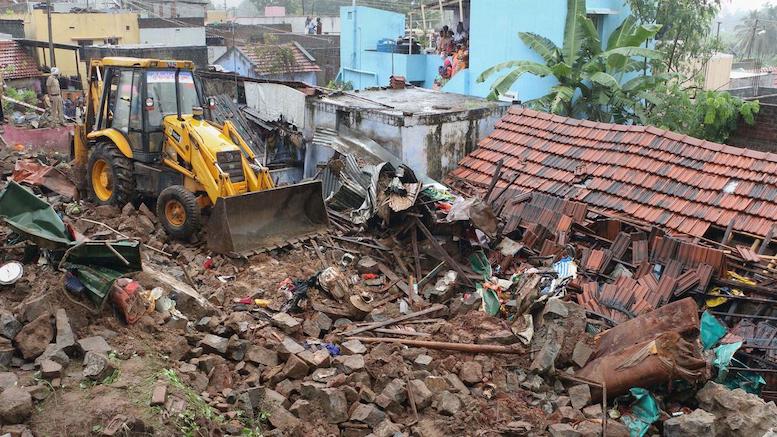 Preying on the death of 17 persons from a Scheduled Caste community in an accident in Nadur village in Coimbatore district, Tamil Nadu, a Dalit outfit has threatened to mobilise the people to embrace Islam.

Seventeen persons from the Dalit community were killed in sleep when the compound wall of a house fell on three houses in Nadur village near Mettupalayam town on December 2, owing to torrential rainfall. The compound wall built by a textile shop owner, S. Sivasubramaniam, was on a higher ground than the Dalit houses.

The next day the plot owner was arrested by police on charges of causing death by negligence. However, district administration officials confirmed the wall was built legally on private land and ruled out any ‘caste discrimination’ angle. The plot owner’s brother claimed the height of the wall was about 10 feet to prevent people from jumping into the compound.

Chief minister Edappadi K Palaniswami announced a compensation of ~4 lakh each for the families of the 17 victims from the State Disaster Relief Fund. He also visited the village on 3 December to console the bereaved families. Apart from the 17 deaths in Nadur, the rains have claimed eight more lives in Tamil Nadu since November 29, an official release said.

The Dalit outfit, a little organisation that goes by the name, Tamil Puligal (Tamil Tigers – not to be confused with the Liberation Tigers of Tamil Eelam of Sri Lanka, though both sound the same in Tamil) has blamed the State Government for not doing enough but has chosen to convert to Islam, at a function scheduled on January 5.

Tamil Puligal blamed the government for the release on bail of the person, whose compound wall collapsed. That the Madras High Court and not the government granted bail seems to bear little consequence on their reasoning.

The Puligal while citing the bail to the house owner argued that the government has set free the accused but has arrested its leader, an advocate Nagai Tiruvalluvan, who, it claimed, was fighting only on behalf of the affected Dalit people.

The Puligal quoted Ambedkar to reason that by converting to Islam the Dalits would get dignity and come out of the “casteist” Hindu fold. It quoted Dr. Ambedkar to say that while the Dalits may have been born Hindus, they have chosen to leave the fold to gain dignity.

But the organisation hastened to add that it did not completely go by Dr. Ambedkar’s words when questioned about his rather critical observations on Islam. Though Dr. Ambedkar was critical of Islam, its views differed from his and particularly in this issue, as it believed that Islam ‘spoke about equality’ and as the religion as it was practised ‘did not discriminate against people’.

The Puligal also said that it did not matter as to which mosque the converted Dalits would go. It further said that by converting to Islam at a time when it was rumoured that Bharat was unsafe for Muslims, it hoped to add to the number of Muslims in the country.

But in Mettupalayam, Tamil Puligal’s statement is seen more as a threat to draw the government’s attention. The town residents said the Dalits in the affected Nadur area were very much within the Hindu fold and even observed the monthly rituals observed during the Tamil month, Margazhi.

They also said that the organisation was only preying on the tragedy and was an extension of the agitation based on the baseless allegation that the compound wall that fell was an ‘untouchability wall’ that discriminated against the Dalits.

They suspected that the Puligal’s threat to make Dalits embrace Islam could be due to its close affinity to a few Muslim organisations, for the social media groups of Islamic organisations were sharing the news of conversion.