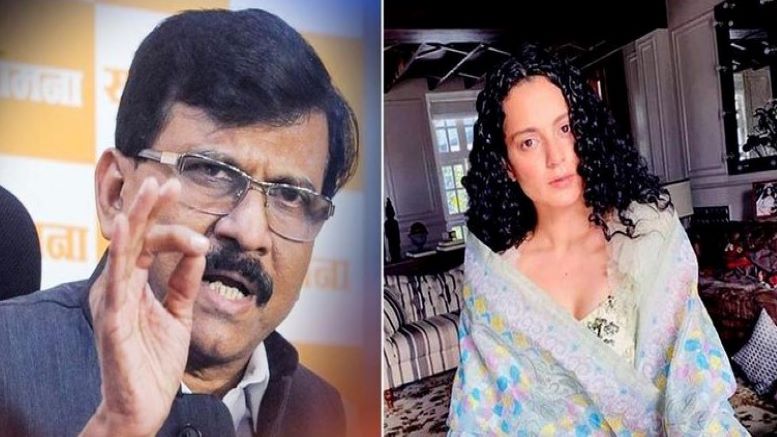 Sanjay Raut and Shiv Sena are perfect examples of how power goes to one’s head. In what can only be termed as disgusting, Raut has unleashed a verbal volley against actress Kangana Ranaut and the latest would put anybody to shame.

The gutter-level politics that is being indulged in at present was taken a notch lower by Raut when he called Kangana “haramkhor ladki” (rascal or wicked). Whatever the differences of opinion or disagreements, calling a woman rascal or wicked by a member of a party that swears to stand by Chhatrapati Shivaji Maharaj’s ideal is despicable, to say the least.

Has he not insulted a hardworking woman? And is this not intolerance? pic.twitter.com/P19VJsQ5Vj

What is even more appalling is the fact that the entire Bollywood and Marathi film industry that raised questions on Kangana’s statement has maintained a studied silence on one of their female colleagues being called names.

The likes of Swara Bhaskar, Richa Chadha, and Sonam Kapoor who swear by feminism have conveniently gone into hiding. Furthermore, the women’s wing of Shiv Sena held a demonstration against Kangana where the latter’s poster was hit with footwear and this act was backed by the mayor of Mumbai who is herself a woman. So much for women’s rights and feminism!

While the focus has been on Kangana’s statement equating Mumbai with PoK (Pakistan Occupied Kashmir), the fact that her statement was in reply to Sanjay Raut’s open threat asking her to not come to Mumbai is conveniently being ignored. This is a classic case of diverting attention by ignoring the main issue.

Compare what Kangana said to the statement by Aamir Khan that his ‘wife felt unsafe in India’? Did any senior BJP leader issue threats to Khan provoking him to respond like that? No. Raut and others are even fabricating things like claiming Kangana insulted Chhatrapati Shivaji, with zero evidence!

For the record, Kangana Ranaut has only been voicing what the entire country feels – that the MVA govt. currently in power in Maharashtra has failed to properly probe the Sushant Rajput murder and Palghar sadhu lynching cases, in both of which involvement of those close to the ruling coalition is suspected. The Mumbai police led by the controversial Police Commissioner Parambir Singh (accused by Sadhvi Pragya and Lt. Col. Purohit of having inflicted brutal torture on them in 2008) has faced criticism from all quarters for failing to live up to its own standards in last few months.

The Bollywood drug cartel expose and the emerging Shiv Sena connection along with the MVA government’s failure on all fronts have clearly rattled the government in general and he Shiv Sena in particular. That’s the main reason for Raut to make random accusations and statements.

It is pertinent to point out here that in the past as well Sena has insulted women when it name called social activist Mrinal Gore. However, Sanjay Raut has crossed all limits of decency.

Instead of fighting the pandemic and the crumbling health care facilities besides the floods in Vidarbha, the government is busy in PR exercises and Raut’s verbal diarrhea. It is high time the party stops misusing the name of Chhatrapati Shivaji Maharaj who had the utmost respect for womankind and gets on with the business of governance.

Raut is simply exposing himself and the Thackeray family’s insecurities by time and again indulging in incoherent and insulting rants.